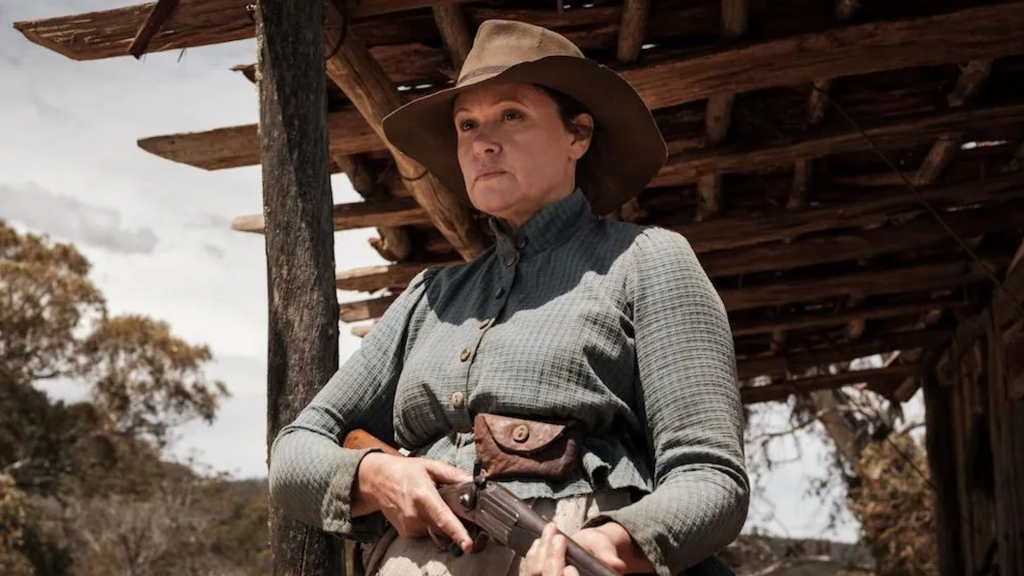 In The Drover’s Wife: The Legend of Molly Johnson, writer-director Leah Purcell attempts to unpack the messy history of the Western genre and the even messier history of colonisation, all while asking big questions about justice and fairness.

The film centres on Molly (played by the writer-director), whose husband has been away droving sheep for six months, leaving her to look after their four small children on her own and heavily pregnant. Yadaka (Rob Collins), a local Aboriginal man on the run from colonial authorities, seeks shelter on her land, and in the nearest town Sergeant Klintoff (Sam Reid) investigates a series of brutal murders.

Tropes and imagery of the Western that are usually used to mythologise the American frontier – a wild and enigmatic landscape, a society that is not yet established, lawless individuals and a community that craves cohesion and order – are here used to tell a story demythologising Australian colonisation.

Purcell loosely adapted the film (and also an award-winning play at Sydney’s Belvoir St Theatre, which ran in 2016, and a 2019 novel) from an 1892 short story by bush poet Henry Lawson.

In Lawson’s short story, a woman struggles alone against a hostile natural world while her husband is away droving sheep. The narrative takes place over one night when, on her own and with no husband to protect her, the titular Drover’s wife sees a snake disappear under her house. She sends her children to bed and stays up all night with her dog, waiting for the snake to emerge.

Lawson’s story is of a woman left to defend herself and her children from the dangers of the outback, but Purcell’s adaptation – set in 1893 in the Snowy Mountains, NSW – tells a different story about the dangers a woman alone might face.

The film begins in a tense moment. Molly, sweeping bugs and leaves away from the dirt path to her tiny mountain shack, listens for the sound of danger. When she finally does hear the threat, it’s monstrous: the sound of a feral bull echoes through the landscape and sounds almost like a monster from a haunted house story. As she aims her shotgun, Molly is bombarded with memories of another time she fended off a threat to her life, one that is revealed much later in the film.

Read: After Yang offers a remarkable vision of humanity

The danger of this scene comes not from a native venomous snake like the one Lawson wrote about, but an introduced species, a threat not only to Molly but to the environment in which she’s building a life.

Thematically, The Drover’s Wife has a lot on its plate, and it’s a testament to Purcell’s experience and talent as a writer that it works as well as it does. It is a film that is easily recognisable as a Western, and yet feels wholly new. The imagery and themes don’t just borrow from a well-established genre, but transform them into something that feels new and exciting. Part of its freshness is no doubt down to a change from the usual setting.

The iconography of the Western is inextricably linked with American westward expansion, with many classics set in Texas (but filmed in Monument Valley, on the border of Arizona and Utah). Westerns set in other countries aren’t uncommon, but they all owe an iconographic debt to the image of John Wayne wearing a Sheriff’s star and a ten-gallon hat as he scowls into the American frontier.

The Drover’s Wife, on the other hand, creates an unmistakably Australian Western with its colonial law enforcement attempting to recreate an English country town in a climate that will not accommodate one.

It’s not just the change in setting that updates the formula – themes that are always present but often incidental to the Western are instead placed front and centre. The film tackles questions of what it means to belong – or not belong – to a society.

The nearest town to Molly’s isolated shack is Everton in north-east Victoria, which is in the process of being built, literally (there are more buildings under construction than completed) and figuratively (many residents express concern about what type of person will be allowed to live there).

Sergeant Klintoff, who just arrived in town with his wife, learns that upholding the law largely involves getting into fist-fights with drunks and making sure the settlers feel protected from the local Aboriginal communities. Klintoff’s assertion that the land needs ‘law, not a moral compass’ brings into stark relief what his job really is, to build a community by violently excising threats, real and perceived.

There are aspects that don’t quite hang together. The third act feels to me like an attempt to create an ending that is hopeful yet realistic to the setting and the characters, but only half succeeds. It’s a shame that a film that so beautifully and carefully told a complex and heartfelt story about the relationship between love, justice, and the law, doesn’t completely stick the landing.

But as a whole, The Drover’s Wife is a terrific film and a wonderful example of the stories that can be told when you revise an old genre to tell an old story from a new point of view.

The Drover’s Wife: The Legend of Molly Johnson

The Drover’s Wife: The Legend of Molly Johnson screens in Australian cinemas from 5 May 2022.