Ivan Sen's new film is more an experience than a plot-driven narrative, its dramas intimate and personal.
Anthony Morris 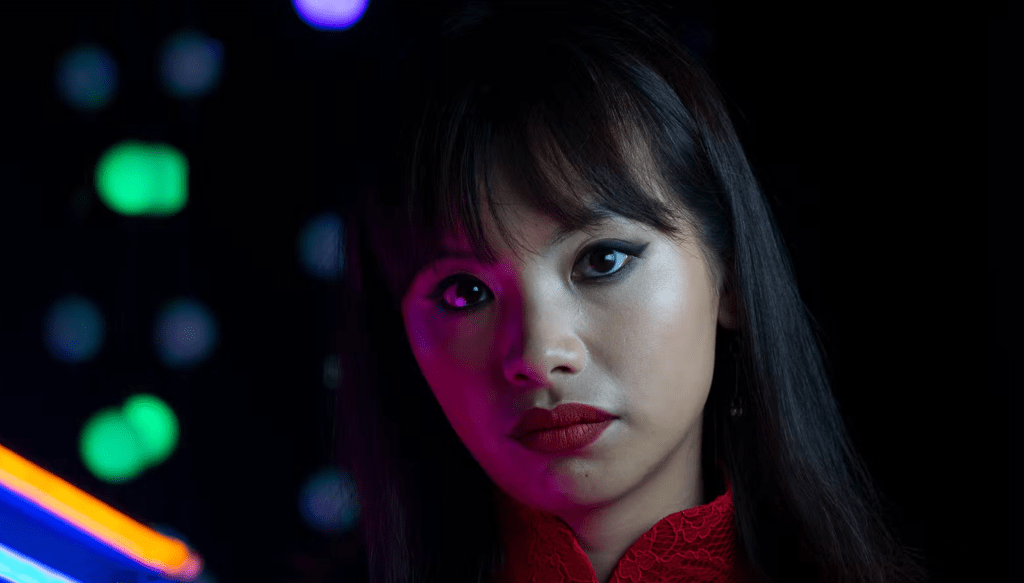 In a crowded, impersonal future metropolis, a hired killer named Jack (Ryan Kwanten) struggles to figure out his place in the world. A street kid who never knew his mother, he falls asleep beside sexbots built to look like middle-aged women, wondering if his real mother would recognise her eyes in his face. The streets he walks are crowded, but his life is empty of meaning; even his murders leave no trace on him. Then he sees a woman on a train and everything changes.

Ivan Sen’s Loveland was shot in part guerrilla-style on the streets of Hong Kong, with Kwanten’s sombre killer walking through the teeming city’s crowds. The usual cliches about the city being a character don’t quite fit here; Hong Kong is playing a future version of itself, with long shots featuring science fiction skyscrapers and a constant heavy mist that blocks out the moon even as bright lights (drones? Flying cars?) cut through it. It’s a memorable location, but it’s always slightly removed; this is fiction, not documentary.

The woman on the train is April (Jillian Nguyen), a karaoke singer men hire for the night to serenade them in private booths where their faces remain a mystery. Jack hires her, then comes back, then asks her out for a meal.

Read: Ivan Sen on filming Loveland: ‘It was just a joy’

A tentative relationship begins, and Jack’s gaunt shell begins to thaw. And keeps on thawing. Soon he’s falling apart. Could his next target, runaway specialist in life extension Doctor Bergman (Hugo Weaving), be the one to uncover the secret of why, just when his life seems to be coming together, Jack’s body is starting to fall apart?

Loveland tells its story in a minor key. Plot angles rear up, only to fall away. Jack’s increasing decrepitude just when it seems like his murderous past is catching up to him could lead to a string of tense action sequences. Bergman’s mysterious corporate past could have massive implications for the future of the world they live in.

But this isn’t that film. These are small people, their dramas intimate and personal, taking place in laneways and over shared meals in cafes.

Kwanten has strong (and satisfying from a story perspective) reasons for playing Jack as a cold fish, and Weaving can do avuncular in his sleep, but it’s Nguyen’s April that cracks Loveland’s emotional shell. She’s given the trickiest character by far to play, but April never comes off as a fantasy girl.

She’s lonely, sad, and seeing her life trickle away. Having a grim-faced stranger come into her life (and then not really know what to do once he’s there) rapidly shifts from danger to opportunity, and she grabs it with a liveliness that lights up this deliberately remote film.

This is a labour of love for Sen. Aside from writing and directing, he’s also the DOP, composer, and editor. Best known for outback noirs Mystery Road and Goldstone, here he displays the kind of confident film-making that’s increasingly rare in Australian features.

Loveland is designed to be an experience more than a plot-driven narrative – though everyone gets a voiceover and its near constant at times, a litany of loss and regret that’s more about washing over you than imparting concrete information.

Many of the pleasures here are surface ones: a haggard Kwanten walking the bustling streets of Hong Kong, the velvet purr of Hugo Weaving’s dialogue, the odd way a deactivated killbot falls to his knees. For fans of a certain kind of science fiction, this is a must.

Wong Kar-wai hasn’t made a film in a while and the last Blade Runner was a bit of a mixed bag. You could do a lot worse.

Loveland is in cinemas now.