We're probably not going to get the next Mad Max from TikTok, but we're seeing the birth of a new form of filmmaking.
Silvi Vann-Wall 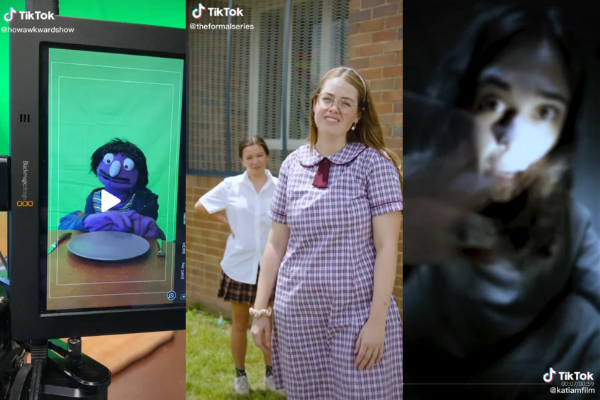 The addictive app allows creators to make the content they want, no matter their skill level or budget. Image: howawkwardshow, theformalseries & katiamfilm.

I have a confession: I have spent the better part of the corona years slowly getting acquainted with, and then rapidly addicted to, TikTok. And as someone who is now referred to by friends as ‘The TikTok Curator’, I reckon I know a bit about what people are putting on there and why.

Sure, there’s the usual internet suspects like cute baby animals, epic gaming fails, and drool-worthy food – but when I started seeing fully produced, emotionally-grabbing films in my feed, I really began to take notice.

Film is reborn on TikTok

60-second film clips don’t exactly scream cinematic, and yet some of the most innovative filmmaking, I would argue, is being made on TikTok. As it turns out, you don’t need an expensive camera, sound or lighting set-up to make something great.

Read: Create a TikTok film and win a trip to Festival de Cannes

Spend a few minutes on the #ShortFilm hashtag and you’ll see that many filmmakers are embracing the limited running time and vertical presentation to create game-changing new works.

TikTok is hot digital real-estate for filmmakers, and Aussies are making their mark. Here’s a highlight reel of some of the best Aussie filmmaking to come out of TikTok:

Read: The rise of the tiny film

Toby Hendry (@Tibees) is a Science YouTuber who decided to turn her attention to TikTok, ‘mainly out of a fear of being left behind, after seeing some amazing growth that people have found on the platform. TikTok can be great for niche creators like myself’.

‘The platform seems to be good at finding an audience that will be interested in your subject matter no matter how nerdy or seemingly unpopular it may be’.

Hendry makes videos about interesting ideas in mathematics and the history of science. She does this mostly by showcasing scientific library books, to help ‘capture that sense of discovery that comes with browsing library shelves and learning something new’.

She shoots on her smartphone, uses a microphone for voice-overs, and edits on her laptop. She also previously confessed that she hadn’t yet mastered the art of creating videos using the tools native to the app, so she does her editing using the software Final Cut Pro.

Sam Cotton (@MrSamCotton) is an actor, animator and voice-over artist who recently won the Got A Minute? film competition.

Sam describes his work as Australian comedy augmented reality animation. ‘Basically I turn real footage of everyday things into animated characters,’ he says. .I call them my Ani-Mates.’

His process is easy, usually involving smartphone footage and finger-drawn additions. ‘I usually just animate a video and jump straight onto to TikTok and post it, but it also has some really accessible and helpful creative tools to help add to your videos if needed’.

TheFormalSeries uses the mockumentary style to portray a story of two high school girls planning a school formal. In just 10 episodes, The Formal achieves what many developed TV series could only hope to: appealing visuals, a funny, emotional narrative, and a devoted online-fanbase.

KatiAmFilm, also known as Katia Mancuso release a trailer on her TikTok account for a ‘choose your own adventure’ style horror, which has the potential to be some really ground breaking work.

Beneath the Darkness is interactive – the audience’s choices determine the fate of a shackled amnesiac in an abandoned prison, who must learn the truth and escape … or die trying.

Katia says that ‘the film took about half a day to shoot and edit along with my producer CJ Welsh and actor Paige Joustra. I shot the film with my phone on a gimbal, which involved having to recreate that first-person perspective in the action. It was a fun experience that brought about new challenges with the 1 minute time limit and vertical shooting’.

Tofu the dog will already be known to many. The Melbourne-based Shiba Inu has had a cult following for some time now, emerging from platforms like Instagram and YouTube and now adapting to TikTok’s vertical style.

Tofu mainly uploads motivational-style comedic videos that would not feel out of place on a primetime sketch show.

And for something a bit different: Howawkwardshow are doing personal anecdotes blended with high-skill puppetry.

How to upload short films to TikTok

Uploading a short to TikTok is easy – once you’ve downloaded the app and created a username, it’s simply a matter of clicking the ‘plus’ symbol at the bottom of the screen.

From there you can select videos and images from your camera roll, or hit the red record button to start shooting from scratch. Once you’ve got your footage laid out, you can drag & pinch each clip to change the order or duration.

More can be done if the video is shot and edited separately to the app – for example, using a program like Adobe Premiere Rush, which allows you to manipulate more than just clip timings and filters. Then you can upload the exported video file to TikTok via the desktop version of the site.

After hitting ‘next’, you can add music (what TikTok refers to as ‘Sounds’), text, and even a voice over. This can be your own voice, or you can use the artificial text to voice function that has a range of different accents. Finally, you can add effects and filters to give it a real shine.

And that’s it! The description and hashtags you give your video are up to you – ultimately, the algorithm will decide your fate …

The limitations of TikTok

– Censorship is harsh. TikTok is made and monitored in China, and creators are subject to China’s censorship laws. You may come across a video that features nudity, swearing, drugs, or other equally titillating things – but chances are it won’t be long before it’s been reduced to a line that says ‘This video is under review and can’t be shared right now’, or deleted off the platform for good.

– You have a mere second to hook the audience, otherwise they’re gone forever. The nature of the continuous For You page means the ultra-discerning viewers will scroll away instantly if they don’t like what they see. And if they’ve scrolled, they’re almost never coming back.

– The time limit of three-minutes means only the shortest of short films can be uploaded to TikTok. But there’s good news – the platform recently changed its design to allow uploads of up to 10 minutes in length. We are yet to see what this will mean for user engagement.

Sure, we’re probably not going to get the next Mad Max from an app that is most well-known for its dance trends and memes, but we may well witness the birth of a new form of filmmaking, one that is more accessible and more conversation-like than ever before.