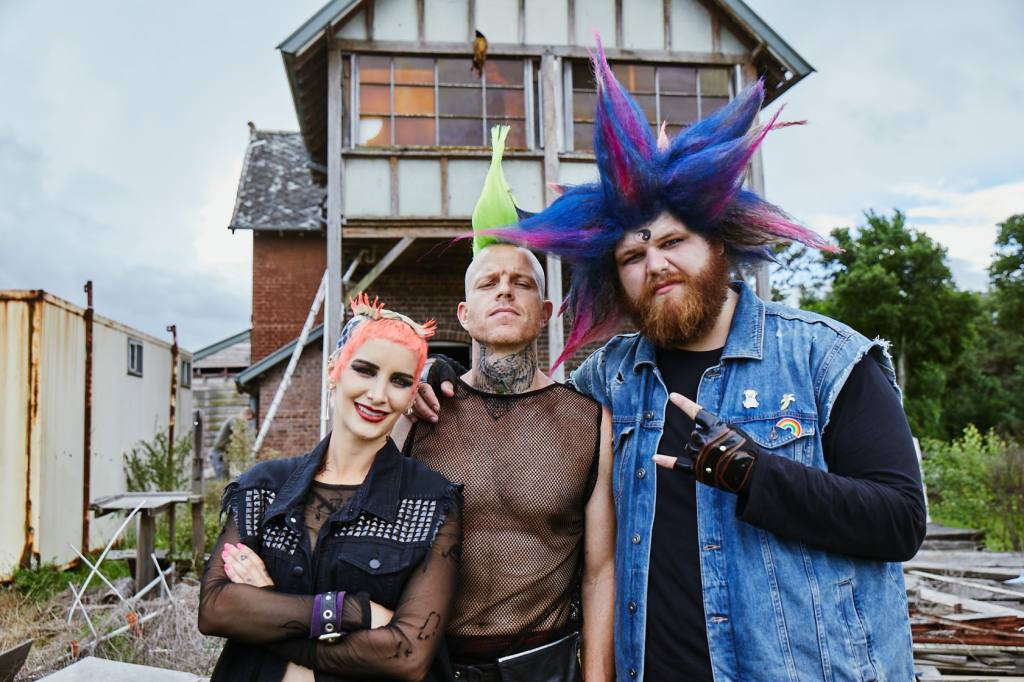 Don’t spend too long trying to figure out how moths come into what is essentially social satire that isn’t tied to the news cycle, but rather makes fun of moral hypocrisy wherever it can find it – in capitalism, the media, and everyday life.

Only the first two episodes – ‘Timecest and Ice Cream’ and ‘David Is Goliath’ – were available for preview, and at only 18 minutes they never wear out their welcome. But there’s still a touch of “that was it?” to each episode, which focuses on just a few ‘anchor’ skits which it revisits several times, rather than offering more variety.

I was left wondering if any of them would turn out to be running gags in episodes to come, or if they’re more ‘one-and-done’ jokes. Amazon is releasing The Moth Effect week by week – which made me wonder whether the network wants to build a loyal audience over time, or expects viewers to dip in occasionally, like a tasty snack in their regular screen diet.

Despite the mostly Australian and Kiwi cast, The Moth Effect deliberately makes its topics, cultural references and aesthetics recognisable to a broader Anglophone audience.

The skits manage to be both high-concept and silly – while I didn’t actually laugh much, I enjoyed the ideas behind them. Despite the mostly Australian and Kiwi cast, The Moth Effect deliberately makes its topics, cultural references and aesthetics recognisable to a broader Anglophone audience.

Directorial duties are shared by Gracie Otto (The Other Guy, Bump, Under the Volcano) and Craig Anderson (Double the Fist, Review with Myles Barlow, Red Christmas), the latter of whom pops up onscreen here occasionally as a Shane Jacobson-esque figure. Some segments have the slick production values of US comedy, while others have a more British vérité feel.

One skit about rival gangs of philosophers who terrorise an English village might not have been out of place in Big Train or The Fast Show, if not for the cast’s horrible attempts at English accents. And a sketch that might enjoy broader social-media cut-through (along the lines of Skit Box’s Activewear) is a slick Lin-Manuel Miranda-esque rap anthem about dads who think they’re heroes for doing the bare minimum of parenting.

Kate Box is very arch as the owner of ice-cream company ‘Jen and Berry’s’ who, in a mockumentary-style sketch, decides to pivot to socially conscious marketing. The satire here is quite sharp as the Jen and Berry’s team brainstorm novelty flavours to dismantle the military–industrial complex – my biggest laugh of the whole series came from their twist on banana flavour. We then see the resulting TV commercials, which skewer the moral vacuousness of corporate social activism.

Boshier is ‘Time Knight’, the epoch-hopping star of a gimmicky ’80s action TV series whose mission to prevent WWII has Oedipal consequences. It’s the kind of bell-curve comedy sketch that is immediately dumb, gets funny once it hits the straps of its premise, but gets less funny the more the joke is repeated.

I enjoyed the Queer Eye piss-take ‘Q-Eye’, in which an unfab four gurning men transform reactionary but old-fashioned author Bryan Brown into a contemporary QAnon conspiracist. There’s something amusingly poignant about the resigned way Brown watches his copy of Manufacturing Consent being ceremonially burned; a smart observation that feelgood makeover TV is ultimately just as hollow and coercive as wackadoo YouTube channels.

But my favourite sketch was ‘Angry Attenborough’, a climate-change parable in which the beloved nature documentarian’s rage that nobody is taking action to save the world transforms him into a city-crushing colossus – but rather than heed him, the world decides to violently put Attenborough down. The sketch unfolds through live TV news coverage and says something very savage about the media’s complicity in maintaining the status quo; there are lots of biting little jokes in the chyron graphics.

In future episodes, David Wenham and Miranda Otto are a couple who order a SmartPillow™ and get outsmarted by it; in a Blade Runner piss-take, a jaded future cop subjects a suspected ‘synth’ (Jessica De Gouw) to a complex test to prove she isn’t a robot; Jesus hires a talent agent to ‘rebrand’ him for his Second Coming; and a Star Wars fan offers some pointed notes to the screenwriter of the upcoming Episode X.