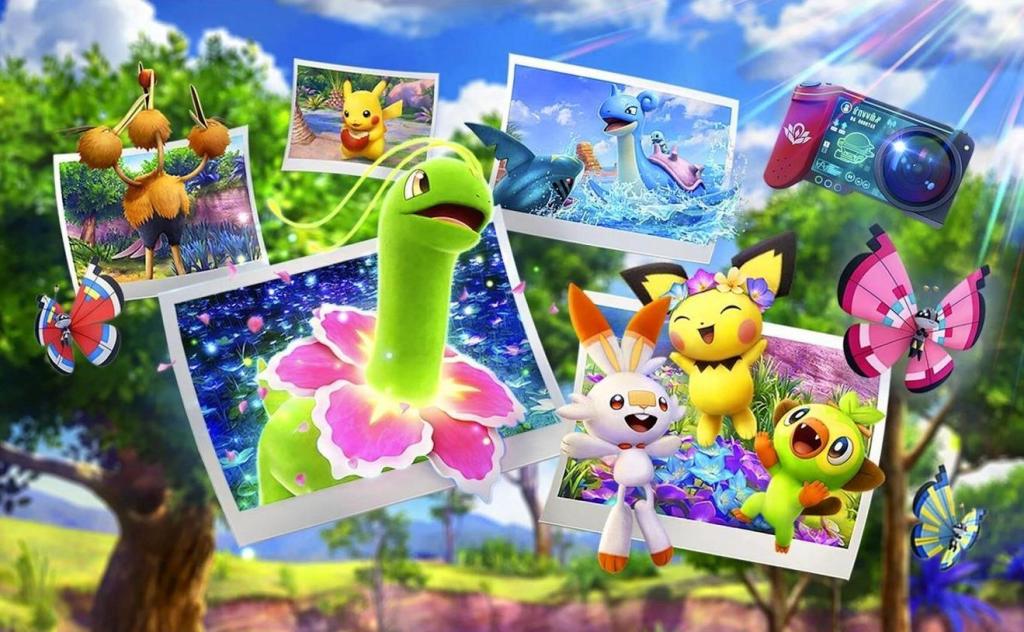 When Pokémon Snap was released for Nintendo 64 in 1999, the photo-taking safari game was a radical departure form the main franchise. In the mainline pokemon games, an encounter with a pokemon is framed around collection, and a wild encounter is almost invariably an attack; by contrast, Snap offered a glimpse into a pokemon world largely untouched by humans. Rather than catching, training and battling, the player careened through a range of natural biomes seeing, for the first time, pokemon in their natural state: hunting, playing, sleeping or completely indifferent to your presence.

21 years on, New Pokémon Snap reproduces this format almost exactly, and while it tries to recapture the wild, expansive magic of the original, it doesn’t wholly succeed.

Set in the new region of Lental, New Pokémon Snap provides more narrative to structure your photo snapping: where the original Snap asks the player to take photos to accompany Professor Oak’s research ‘for science’, New Snap sees the player join a full research team: Professor Mirror, original protagonist Todd Snap and research assistants Rita and Phil are on a mission to discover the cause of the illumina phenomenon, which causes some pokemon to glow. As you travel on rails through the biomes in the NEO-ONE, documenting pokemon both glowing and non-glowing, you are aided by a handy kit that substitutes the original game’s apples with fluffruit, pester balls with ephemeral illumina orbs, and the pokéflute with an imaginatively named ‘music player.’

The game offers a wide variety of new biomes that contain pokemon from across all eight generations, with each run offering ample time to observe the complexities of these small worlds, ranging from icy mountain peaks to deep under the sea. As you gain experience (and photography points), you can access these areas at night, and the balance of alienation and familiarity makes each biome feel tangible, like a home.

The addition of illumina orbs is also a welcome one, as the glowing aura they bestow on your subjects makes each photo feel special. Beyond the rewards of getting the perfect shot, or tempting a previously hidden pokemon out of its den, is the greater reward of observing the characterful details of these environments: a pichu and grookey who seem to hang out as friends, or a mantine basking in the crystalline waters of Maricopia reef.

However, the game’s charm is quickly undermined by some fumbled broader design decisions. There are stringent requirements to unlock each track that require repetitively traversing the same paths over and over, and the ambiguous way that points and stars are awarded to each photo encourages quantity over quality. With this forced repetition, the choreography of each stage becomes more and more evident as pokemon reappear and disappear like clockwork, which makes it difficult to get lost in the utterly stunning microcosms that the games art creates. Even the additional pokemon that crop up in familiar tracks start to feel predictable: by about halfway through the game, I wasn’t just noticing the pokemon, but also the conspicuously staged gaps where I guessed, usually correctly, that new pokemon would be inserted on later track levels.

I was distracted from the best parts of the game by these seemingly arbitrary tasks that propelled an overarching narrative that, if I’m honest, I didn’t really care about. I really just wanted to take photos of pokemon, and I didn’t need an ancient ruin mystery that required a bunch of non-pokemon-photography steps, was resolved almost exclusively off-screen, and then explained to me in extensive exposition, to get me on board. On top of this, surprisingly little of the abundant NPC dialogue is actually dedicated to reminding you what you need to do next, and the tasks themselves are hard to stumble across organically, which can leave the player stranded.

It’s rarely compelling when an exploration game relies on unrepeated, outright narrative exposition to direct linear progression, and New Pokémon Snap is a miserable offender in this regard. For the first couple of runs on a new track, these worlds feel exciting and fresh, and I had an organic desire to document them. But the conditions of narrative progression force a player into repetitive runs, and repetitive actions within those runs, that feel totally unintuitive. By the final biome – objectively one of the most intriguing and beautiful of them all – my approach was more mechanical than inquisitive. My focus had closed in around the functional structures of the game – I didn’t speculate about the worlds and lives beyond the rails.

After about eight runs through one track and only ten seconds or so after realising the reason I wasn’t progressing was that I had just forgotten to get the snap a specific crystalbloom that would unlock this biome’s illumina orbs, the thought occurred: Is this what happens when you turn Pokémon Snap into a real game?

The original Snap only took a couple of hours to play through, but it expanded the imaginative depth of the pokemon world almost infinitely. While the game was also strictly on-rails, it felt deeply undomesticated: with a wildly sensitive first person view, the player swerved and jolted between magma flows at breakneck speed while a Rapidash cut across your path, or clipped through a Voltorb in a cave full of mysterious machines. The speed and lack of narrative context paired with a simple control structure to create a continuous loop of surprise and response that totally concealed the restrictions of the format. Instead of trying to provide a perfectly realised world, it provided enough information for a player to extrapolate their own worlds.

Any review I write of New Pokémon Snap will inevitably be coloured by nostalgia, but it’s not really the 1999 release itself that I’m nostalgic for. What I think is missing from this redux is the 90s game design sensibility that explained less, and trusted in player experimentation more. This is the ultimate downfall of New Pokémon Snap. At its best, it’s a whimsical space where anyone can enjoy some of the best of Pokémon’s environmental art and revel in its characterful creature design. At its worst, it is a fatally incurious game that drags its player between stunning vistas to complete menial tasks, and the actual joy of photographing pokemon feels like an indulgence that you slot in between jobs.

“At its worst, it is a fatally incurious game that drags its player between stunning vistas to complete menial tasks, and the actual joy of photographing pokemon feels like an indulgence that you slot in between jobs.”

So much of the game’s wild appeal is lost through this lack of imagination. The game gives you the camera, literally and figuratively, and then spends ten hours telling you exactly what to do with it, as if forgetting that the joy of photography and exploration games is the act of looking for yourself. For a child in particular, that feeling of being in charge, of your gaze mattering, is utterly compelling  – but New Pokémon Snap seems unable to trust its players to make their own fun.

The original Pokémon Snap might be a nigh-unplayable technological curio to a 2021 audience, but New Pokémon Snap felt railroaded in and outside of the NEO-ONE. The intrepid sense of navigating new terrain – not just being able to navigate it, but being the right person to navigate it – that this game could have offered is thoroughly undercut by imposing design decisions that ultimately cost the game its heart.

I’m completely content to observe and document these magnificent worlds on rails; I just wish this game encouraged my imagination to wander a little further.

A copy of New Pokémon Snap was provided for the purposes of this review.