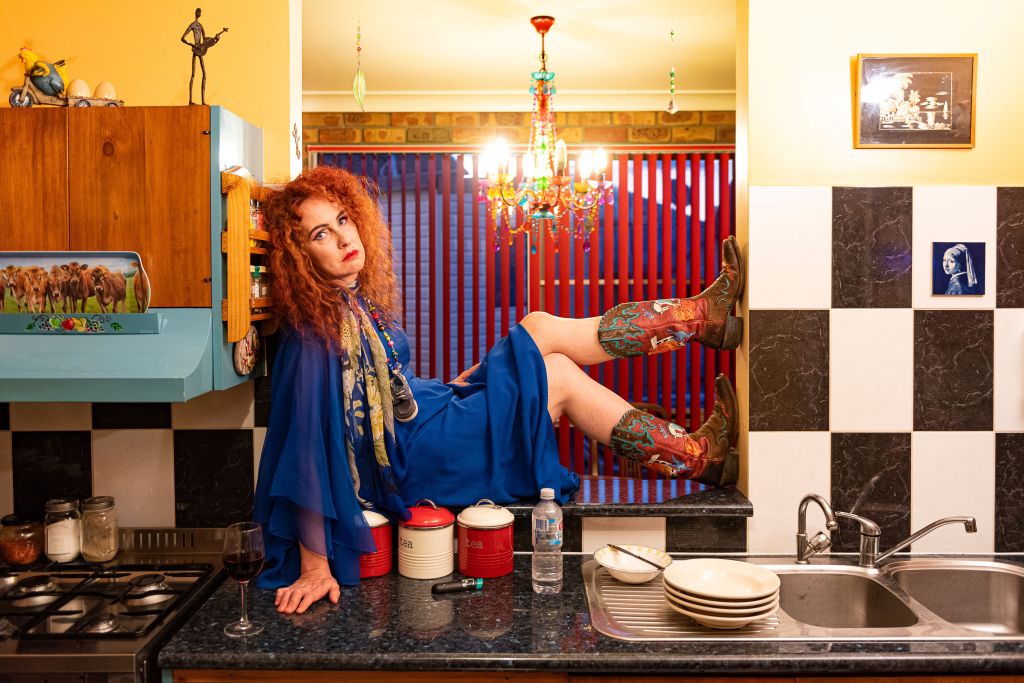 If you were to scour the hidden nooks and crannies of your go-to music streaming service, you may come across an album named I’m Wanita. It’s an unassuming album about the fraught and the tender relationships between women and men, about heartbreak, and about life’s many strange and beautiful moments along the road to self-reflection. As Australian country music goes, it’s far more back-bar saloon than the mega-selling stadium rock of Keith Urban. Listening to I’m Wanita, its singer sounds like she has the confidence of a superstar who’s spent decades in the spotlight honing her craft.

Enter Matthew Walker’s film of the same name to put any of those misconceptions to rest. Wanita is a mess. Country music runs through her veins, sure, but she is tornado. A head-on collision of drama and excess, Wanita is as untameable as her wave of flaming red curly hair. Nothing is easy when she storms into a room, and first-time director Walker captures it all in this often uncomfortable yet rewarding documentary that travels from the streets of Tamworth to the recording studios of Nashville, Tennessee.

Already a nominee for Best Documentary at the 2021 AACTA Awards (it lost to My Name is Gulpilil), I’m Wanita finally reaches cinemas after a trip on the festival circuit that saw it win the Australia Documentary Prize at this year’s Sydney Film Festival. After world premiering at Canada’s HotDocs, I saw the film as a part of the virtual component of New York City-based DOC NYC’s last October, proving the international appeal of Wanita’s accomplished music amid the whirlwind.

Australian documentaries often adhere far too closely to a television friendly house style, but Walker (a nominee at the Director’s Guild of Australia for his work) proves a broader audience can be found when embracing less staid traditions of the non-fiction form.

I’m Wanita is not shy about its central figure. She is middle-aged, a sex worker, and has a tendency to burn bridges. If this were a Hollywood biopic or another A Star is Born retread, her marriage would be described as ‘passionate’ when in reality it comes across more as upsetting. Wanita is damaged. And disappointed—she won countless talent competitions as ‘Australia’s Queen of Honky Tonk’ but never cracked the big time. Or even the small time. She doesn’t even have a Wikipedia page, despite multiple album releases.

But when you hear her voice singing about Patsy Cline and Loretta Lynn, she really does stand out. It’s this dichotomy that makes Walker’s film emerge as more than just another musician bio-doc. Walker and his editors, Peter O’Donoghue and Nikki Stevens, are smart not to entirely dwell on the easy narrative of Wanita seeking to record an album in America.

There are elements of the feel-good genre here as Wanita fights to overcome her demons and succeed, yet within this are many difficult to watch moments that will likely rub some audiences up the wrong way. But country music is all about cutting through the bullshit and telling the truth, and so anything but warts and all would be disingenuous. Furthermore, while not as explicit, the implied sexism of the Australian music industry proves as much of a villain here as alcohol and mental illness.

Matthew Walker comes to the director’s chair as an editor. Among his credits are Andrew Traucki’s found-footage horror The Jungle, Indigenous affairs documentary After the Apology, and a swathe of TV including Julia Zemiro’s Home Delivery. I’m Wanita is an expansion of his 2015 Antenna and Flickerfest awarded short called Heart of the Queen; it’s not hard to see why he went back—Wanita is a compelling figure who routinely does the very wrong thing. Kudos too, to a trio of cinematographers (Simon Cunich, Kathryn Milliss, Bryan Moses) who capture the calm and the storm with equally intense closeness that could feel intrusive if Wanita clearly didn’t revel in the camera. A film-ending musical video sequence is a delight that will send audiences out on the (literal and metaphorical) high note of Wanita’s soaring vocal talent.

Musician biopics are so boring these days. Respect, about Aretha Franklin, and I Am Woman, about Helen Reddy, are just two recent examples of a long line of movies that failed to rise above the dramatic clichés of their subjects’ real lives. If I’m Wanita were fictional, we would balk at its (quite frankly) outrageous storyline of escalating spectacle. Thankfully, Walker’s observational doc lets her story unfold without the need to soften its subject’s many rough edges, which makes for a film elevated above Hollywood conventions. Much like the album she created is a testament to her creative heart, I’m Wanita truthfully exposes the torment behind it.