Making I'm Wanita was a five year crusade through the perils of a very difficult craft.
David Tiley 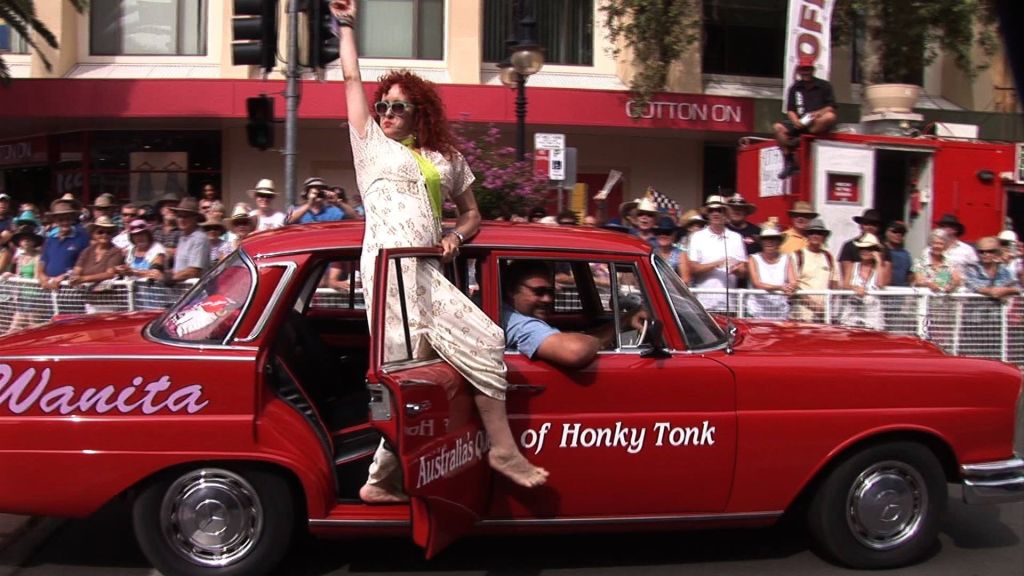 Feature documentary I’m Wanita is a piece of travelling chaos which stuck out like a burning guitar at the 2021 Sydney Film Festival and won the Documentary Australia Foundation Award. Wanita Bhantiar herself is a Loretta Lynn tragic who committed herself utterly to becoming a Country Music Star. Her blinding vision took her to set up in Tamworth 25 years ago, tour when she could, marry a Turkish cowboy (in Turkey) and plot to record in Nashville. She calls herself ‘Australia’s Queen of Honky Tonk’.

Both saint and vampire, loon and seer, she bewitches people around her even as she zaps between outsiderdom, alcoholism, parenthood, prostitution and her microphone. She really is a force of nature.

Matthew Walker was an excellent editor hungering to direct when he was recruited to make a short promotional film about her late in 2013.

As he explained on the phone, ‘The film was shot over four days, and it took me ages to edit. I took the film back up to her and she loved it, and so did Baba [her Turkish husband]. He was laughing his head off, going “That’s true. That’s true!” every time he came on. And then it went into festivals for a couple of years.’

The film has a resonance with the news that Baba Bahtiyar died in August 2021 and this footage remains as a lasting memory of him.

In 2017, Walker approached Michaela Perske to develop the project into a longer film. Screen Australia provided some development finance, and he began to follow her tumultuous life in Tamworth. Her obsession provided a spine to the project.

‘We had the Nashville thing early on. She said that at the start of the development period. So we knew we had a goal to the story, which traditionally I think everyone is very encouraged to have in filmmaking.’ He was also hanging in despite naysayers who thought she was too flakey, or said she would not go to Nashville and if she did, she would not become a star. But Wanita herself knew that and simply wanted to record a good album, worship at the shrine of Loretta Lynn and tour a little in the homeland of her beloved kind of music. But she was tough to follow.

‘At times,’ Walker said, ‘it was so static I would become depressed, particularly around alcohol. Watching people pissed can be so boring. And so disheartening. But she would remain herself, although she kind of shape-shifted for the film. She knew what was required of her in some kind of innate way.’

Read: Film Review: I’m Wanita is more than a Star is Born story

Beside her husband, continually frustrated by her tendency to blow money to the winds, she had two allies. Archer is a singer/songwriter, a travelling man with a swag and guitar, damaged and lonesome and determined. Camped on the borderlines of sanity, he understands her deeply. Gleny Rae Virus is a solid part of society, a multi-instrumentalist and educator, who can hold an audience from the back of Bourke to Nashville recording studios.

Wanita was filmed in a pivotal phone conversation with Gleny Rae, which Walker remembers clearly. ‘“I’m going to just tell them everything, I’m gunna put it all on the line. Do you think that is a good idea?”

‘And Gleny Rae said, “I do think it’s a good idea because that’s what’s interesting about you – your whole life, not just the music.” And so, at that point, she was kind of no holds barred. She knew that things had to keep happening so she was a very easy person to work with. But she didn’t take the documentary as a priority in her life. She was committed but not to anything in particular. She wanted her story told and to keep it interesting.’

Woven into the intermittent shooting days, Walker cut a 58-minute TV movie, There Goes Our Neighbourhood, produced by Carolina Sorensen and written/directed by Clare Lewis, who were partnered in People Productions. They were enchanted by the Wanita project, acquired it from Perske’s Pursekey Productions, and turned it into the crusade this kind of film needs. Tait Brady came on board as producer as well, bringing his deep experience of truly indy productions, and his background as a boutique distributor through Label.

Out in Tamworth, the show was a continual shuffle of available crew – sometimes reduced to the director with a camera and challenging sound, at other times helped by Carolina Sorensen with camera and sound between them. Sometimes they would turn up in town to discover that Wanita was simply not there. The project evolved over five years, often tough times fed on little more than faith.

‘‘I just kind of kept going. It was persistence but not a wilful persistence. I just kept getting drawn back into it. Once I was by myself and the noise around it had settled down, my mind would drift back to the story again and I’d be compelled to keep going with it.’

The project gradually became more intense until they took off for Nashville. Then they all lived in each other’s pockets as the unstable Wanita reached for her artistic peak, infuriated and charmed everyone, and was stabilised by Archer and Gleny Rae.

Here they are in Nashville.

By now the production, the life of Wanita and the destiny of Matthew Walker himself had created a weird set of inter-dimensional rhymes.

‘I was 40,’ said Walker. ‘The producers were brilliant and actually made it happen. And we knew we would never have another opportunity to do this. And I didn’t want to be stuck in an edit suite forever.’ In a sense, the artistic journey of self-faith and brute determination was playing out in front of and behind the camera.

‘She had some kind of magical experience with country music as a child and a teenager. It felt very, very powerful to her and and I guess a lot of people potentially have some experience like that, but they grow up and put it away and get over it, but she still believed in that energy, even in her late 40s.

‘I guess I wanted to see what happened with that. I validated it by putting a lot of attention on it. And I wanted to see if there was a real energy there that could produce something in the real world.’

For all her self-destructive and alienating behaviour, everyone agrees she is a skilled musician. Her behaviour in the studio is practical and knowledgeable. At the same time, her body is often disconnected from her pure musical passion.

‘Fairly early on, she started using the word autistic. And it took me a long time to see what it was.’

Walker had access to the recordings of her when she was a child. ‘These struggles with her difference started very, very early. There is definitely some kind of trauma going on in the background. One of the first things she said to me was that no-one understands me, no-one listens to me. I could feel myself making assumptions, but I decided to take her at face value and listen to what she said.’

Empathy in the edit

This was not about shutting out the medical side of the story and simply concentrating on Wanita’s entertainment value. Walker has substantial experience of neurodiverse people, and he accepts that Wanita probably lives within this story.

The issue really came out in the edit. He probably had up to 500 hours of material, including a lot of tedious telephone conversations, and random hanging around which went nowhere. For two years his income collapsed by 90%. Nikki Stevens worked on the cut for three months. He took over for the next four months, and then Peter O’Donahue pulled it together over ten weeks. The official schedule was in ruins.

Walker took the project back to his home town of Newcastle. His mother had just died, the family home came up for sale, but didn’t find a bidder. So his gang of siblings decided to renovate and try again, while Walker lived in the dismembered pieces of his childhood world. When it sold, his sister offered him a refuge until the edit was finished. He wandered the streets, remembering his past, pacing and pacing with his head full of someone else’s life. He had encounters with a therapist.

‘The challenge of the edit,’ he said, ‘was about empathy. We’d like to get to present the version of Wanita which is very empathetic. And get to the essence of her as I experienced her during the making of the film.

‘The past I found interesting, but things could tip over very, very easily in the edit if we went a little bit too far this way.’

He was walking a difficult line, because the audience could be repulsed at extreme moments, or objectify her with some kind of cheap diagnosis.  ‘It wasn’t about telling a lie about her. It wasn’t about trying to force a version down people’s throats. It was just finding that balance of how you see her when you’re in a clear frame of mind, not stressed out, with a positive view of the world, with an open heart – something like that.’

Personally I found the film uncomfortable at the start. She is pretty repetitive, the music is not to my taste and she makes life very difficult for the people around her. But then they take up the story. Baba struggles to cope and her daughter withdraws almost completely.

Gleny Rae and Archer came to the fore, and we see their wisdom and patience. They have faith in Wanita and we see her through their point of view so it becomes a tender journey as we explore their loyalty and autonomy. They know the worst about her, but they continue to share her journey and that becomes part of the unfolding mystery. Wanita’s support crew are remarkable in their own right.

Right now, Walker is doing his part to launch the film, which opens on January 6 2022. He has become an official part of People Productions and is also directing a film about art therapy which sounds like a coda to I’m Wanita.