The Reef: Stalked is ‘certainly a different take on the genre’

Traucki's The Reef: Stalked has a second act stretch that is remarkably effective with scares that both surprise and shock ... but an attempt at a serious metaphor falls flat, writes our reviewer Glenn Dunks.
Glenn Dunks 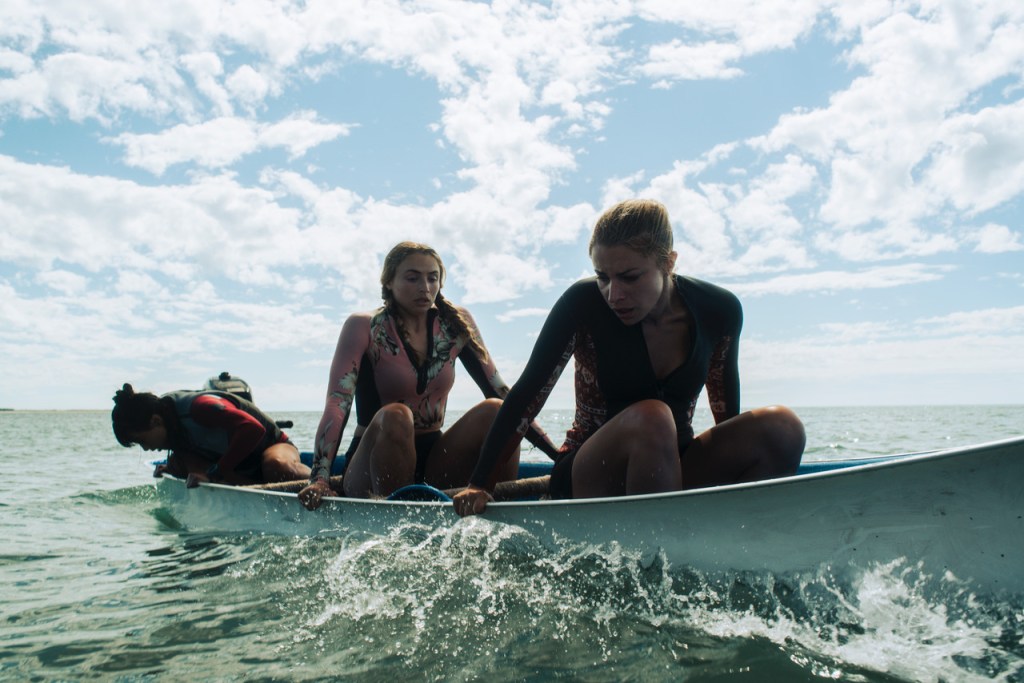 The latest creature feature from writer-director-producer Andrew Traucki shares a title with his own 2010 low budget horror film, The Reef. But don’t be confused, for The Reef: Stalked is a sequel in name only. The set-up is more or less the same, but it’s a new story in a new location with a new cast of characters.

This is the same tactic Traucki took with 2020’s Black Water: Abyss, a follow-up to his 2007 debut (co-directed with David Nerlich) Black Water. Where that franchise was crocodiles, The Reef movies are sharks. Along with the found-footage big cat flick The Jungle in 2013, it’s clear that Traucki has a type. Nevertheless, it’s impressive when any Australian genre filmmaker is able to stay in the country to make these sort of movies instead of taking the industry standard jump to the United States.

Ever since Jaws in 1975, sharks have been a perennial on screen. But you need to differentiate yourself somehow from Spielberg’s masterpiece. There have been sharks + 3D (Shark Night), sharks + genetic modification (Deep Blue Sea), sharks + tsunamis (Bait) and tornadoes (Sharknado). Then there was Open Water, which was sharks + real life, taking the true story of two American tourists left behind by their tour boat off the coast of Australia.

Traucki’s Reef movies have more in common with that 2003 indie hit than any of the others. Levelling its characters in small-scale situations of pure survival, The Reef: Stalked is simple and often effective in eliciting gasps of surprise and shock. But like the water itself, there’s something lurking here that can’t be ignored.

Beautiful one day, a nightmare the next

Nine months after the death of her sister, Nic (Teressa Liane, The Vampire Diaries) has been AWOL. Too traumatised to attend the funeral, she is coaxed back from a new life overseas to a girls’ weekend. Nic is an experienced diver and she’s joined by diving pals Jodie (Ann Truong, Hungry Ghosts) and Lisa (Kate Lister, Clickbait), and younger sister Annie (Saskia Archer in her feature debut), who’s a novice on the water yet eager to re-connect with her older sibling.

Before long, while traversing the seas between islands, a shark enters the fray, stalking the women and (scientifically accurate or not) hellbent on chomping each and every one of them. Will they have the heroics and the stomach to face off against the ocean’s deadliest predator or will this be another downer of an ending like its predecessor?

The Man in the Gray Suit

We learn in an extended prologue that Nic’s sister, Cath (Bridget Burt), is actually the victim of domestic homicide. After being alerted to danger via text message, Nic arrives at her sister’s home to find Greg (Tim Ross, Home and Away) sitting uncomfortably still, scratch marks on his face, and spouting lines like “she made me do it.” Then, Nic finds Cath drowned in the bathtub. It’s a tragic and upsetting start to the movie, sure—and a surprising one, too. But one that I can see Traucki’s good intentions with, using Nic’s recovery from trauma in her fight for survival in nature. Sharks + PTSD is certainly a different take on the genre that I don’t think has been done before.

Ignoring briefly the idea that Traucki’s screenplay is equating the instinctual predatory habits of the ocean’s fiercest carnivore with domestic abusers (a clunky metaphor if so) on land. The problem is that Traucki continuously uses POV shots of Greg drowning Cath at moments of emotional and physical distress. As one character splashes in panic to get back on board their upturned kayak, up flashes vision of Cath as she thrashes and claws for her life, a man’s hands around her throat. Not content to simply allow audiences the opportunity to acknowledge the metaphor and let Liane’s performance speak for itself, this repeated visual choice makes for uncomfortable viewing. I found it to be a grave miscalculation on behalf of Traucki and editor Scott Walmsley and, quite frankly, in poor taste.

I get what they were going for—amplified by the surfing reference of ‘the man in the gray suit’—to never let us forget the scourge of violence against women in our society, and the ocean of grief it can inflict upon loved ones. After all, as noted in Traucki’s interview on ScreenHub, a person is more likely to die from domestic violence than they are a shark attack. But to juxtapose one character’s distress at being unable to breathe while snorkelling to that of a woman being murdered at the hands of an abuser is an artistic gamble that doesn’t pay off.

Which is a shame, because there is much to enjoy here. Shot on open waters in North Queensland—not far from where Julia Roberts and George Clooney will soon be seen gallivanting about in their romcom Ticket to Paradise—it looks beautiful, courtesy of fine work from cinematographer Justin Brickle. The four leads do nice work, too. There is a second act stretch that is remarkably effective with jolt after jolt and scares that both surprise and shock. Similar to The Shallows (easily the best shark movie of the last decade), it also makes good use out of characters being close but not close enough to land to make a swim for it.

Traucki’s screenplay is most successful at giving each of the four actors moments to shine. These characters aren’t so easily and lazily prescribed just one personality type, with each given moments to be brave and smart but also frightened and freaking out. The performers all have chemistry, too, as they struggle with the circumstances that brought them all together as much as the immediate danger they face. Like he has done with his earlier films, Traucki has utilised real shark footage. They are augmented by some admittedly wonky visual effects work, but for the most part that is forgivable given the size of movie that Traucki is making.

The Reef: Stalked isn’t as good as the Black Water movies, but it offers enough of the fun stuff to make audiences want to yell at the screen from the edge of their seat. A rare local horror theatrical outing courtesy of Universal is appreciated. But I suspect it’ll find its audience via the horror streaming platform Shudder like in the United States where it is to be released at the same time it opens in Aussie theatres.