The Reef: Stalked – Andrew Traucki on why his shark flick tackles domestic violence

The Reef: Stalked is a 'sequel in name only' to Traucki's 2010 shark-attack horror film. This time, the shark acts as a deadly metaphor as it hunts down a group of capable women.
Silvi Vann-Wall 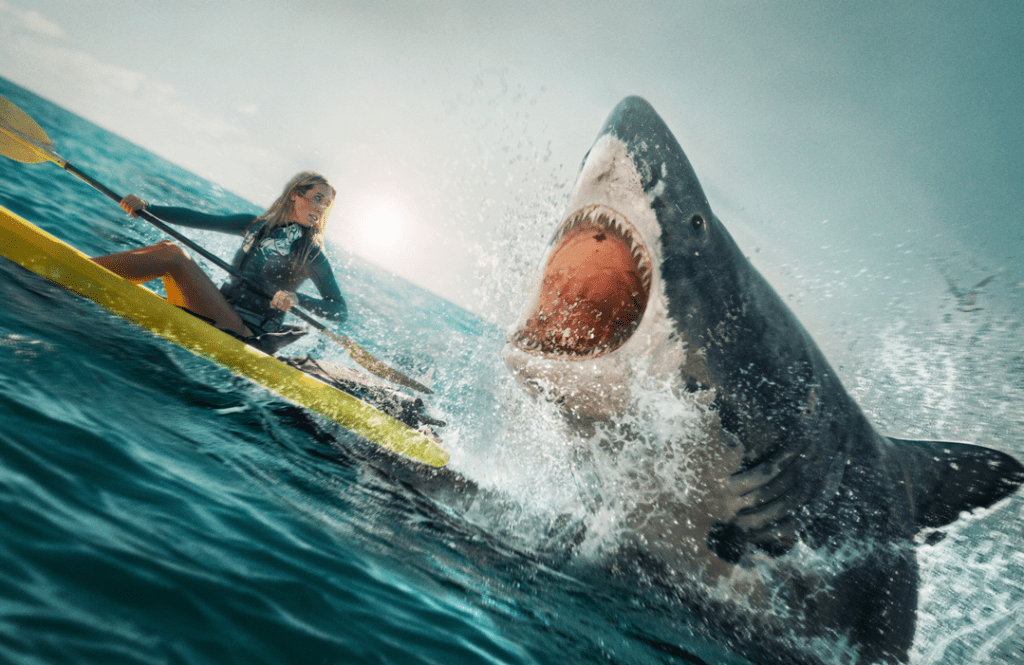 A shark acts as a deadly metaphor in The Reef: Stalked. Image: Shudder

In The Reef: Stalked, Nic, in an effort to heal after witnessing her sister’s horrific murder, travels to a tropical resort with her friends for a kayaking and diving adventure. Only hours into their expedition, the women are stalked and then attacked by a great white shark. To survive they will need to band together and Nic will have to overcome her post-traumatic stress, face her fears and slay the monster.

We spoke to director Andrew Traucki about his shark-infested legacy, and why he decided to do something a bit different with his latest horrific installment in The Reef series.

Hi Andrew. It’s been 12 years since the original Reef, why has it taken so long to get a sequel?

Good question! It’s a sequel in name only, really. I wasn’t really keen on doing another shark movie, because I felt that I’d done that and wanted to move on. Then I realised a couple of things. One, was that there is appetite in the marketplace for shark films. And the second thing was that if I did do another shark film, I could make it something more than just a body count.

I saw this play called Evil Indifference, which was about domestic violence. And that really struck home with me. I began to think about how we call sharks ‘the man in the gray suit’, and I started to see an allegory between a shark attack and a domestic violence situation. So that’s what lured me back into the shark movie – I thought maybe I could elevate the genre.

Read: See What You Made Me Do? SBS tackles Domestic Abuse Crisis

Unlike the first movie, this is a bit of a sisterhood movie – what made you decide to go for that kind of narrative?

I wanted to have a positive spin on such a heavy subject. Rather than everyone getting killed by the shark, I wanted a solution to be found through women collaborating. I also wanted Stalked to be a foil to the original Reef, which had quite a dark ending, so I decided to see what a slightly more uplifting ending would be like.

Because domestic violence plays such a large role in the film’s narrative, how did you ensure that things were kept safe on set when approaching this sensitive topic?

As with all things like this, there’s a lot of protocol to follow. The first thing was to ask all of the actors if there’s any history or something in the script that might be potentially triggering to them. We were very sensitive about it. And indeed, if anything did come up we’d make sure to stop and address it. It was at the front and center of our minds, and something that we wanted to ensure didn’t cause any problems.

Read: Want to be an Intimacy Coordinator? Meet Akala Newman

The music is obviously inspired by Jaws, probably the most effective soundtrack in conveying ‘there’s a shark coming, look out!’ – what other inspirations and influences did you have?

I don’t know if that was intentional – I mean, is it possible to go up against Jaws? It invented the blockbuster and is one of the most successful films ever made. It’s just got so much pedigree. At first I really pushed against Jaws and tried to do realism – I wanted the film to be almost like a documentary. But I was also inspired by Open Water, which was the micro budget shark film, which wasn’t just about sharks but about relationships.

I also take my inspiration from psychological horrors that create realistic tension, so more like Hitchcock and so on. I think making it all about the tension is much more interesting than just pure action.

Why are sharks always the baddies? It seems you personally love sharks and the ocean, so how are you guided by that passion when it comes to making films about killer sharks?

I guess they’re the baddies because deeply imprinted in our DNA is the fact that our ancestors were getting chased down and eaten by similarly big creatures. And that’s still very terrifying for humans. Right now there’s only a few creatures left on the planet that can do that, and sharks are one of them.

But the statistics of being killed by a shark are very low. I think you’ve got more chance of being stung to death by bees than you have of dying from a shark attack. So for the most part it’s just a phobia, but that phobia is really persistent, which is why I think they keep getting cast as the bad guys. I do love sharks, and I think they’re just doing what they do. We are literally asking them to share their environment every time we step into the water.

Just on the statistics, I think you’re also more likely to die from domestic violence than you are from a shark attack.

Real shark footage (as opposed to a CGI creature) was used in The Reef, is it the same deal for the sequel?

Yeah. So wherever possible, we went for live sharks. And I think that’s a real distinguishing factor between my film and most other shark films – that I try to keep it as real as possible.

I don’t want to destroy the magic too much, but we obviously don’t put the actors in any real danger. The whole thing was quite difficult to shoot. We were in water up to our waist for 10 hours a day, and we’re shooting to an open horizon, which means there’s no land, and that gives us about 45 degrees scope of where we can shoot.

So for every reverse shot we have to rotate the subjects around without changing the camera angle. And so for the actors I’d be going ‘the shark’s over there! Now it’s over there! React to that!’ and it’s tough because they’re never acting opposite an actual shark. We got the shark footage done first, and then got the actors to react to that.

When people say films like this turn people off holidaying and hurt the tourism industry, do you take that to heart?

That’s a hard one, isn’t it? Because there are anecdotal stories that Jaws did do exactly that. I think though that people can understand it’s a film and not necessarily what you get in reality. When you visit a reef you’re not going to bump into a great white shark every time. Plus, I don’t feel that I am obligated to promote Australian or American tourism. I feel I’m obligated to try and tell a good story. I don’t think people should take it that seriously.

Will you make another shark film any time soon?

Hopefully not! But, you never know. I don’t really mean that, because they’ve been really good to me. And look, I have been pigeonholed a bit as the ‘Croc/Shark guy’, but I have written comedies and I have got other films in my in my drawer that are ready to go. It’s just a matter of getting support.

The Reef: Stalked is in Australian cinemas from 28 July 2022.