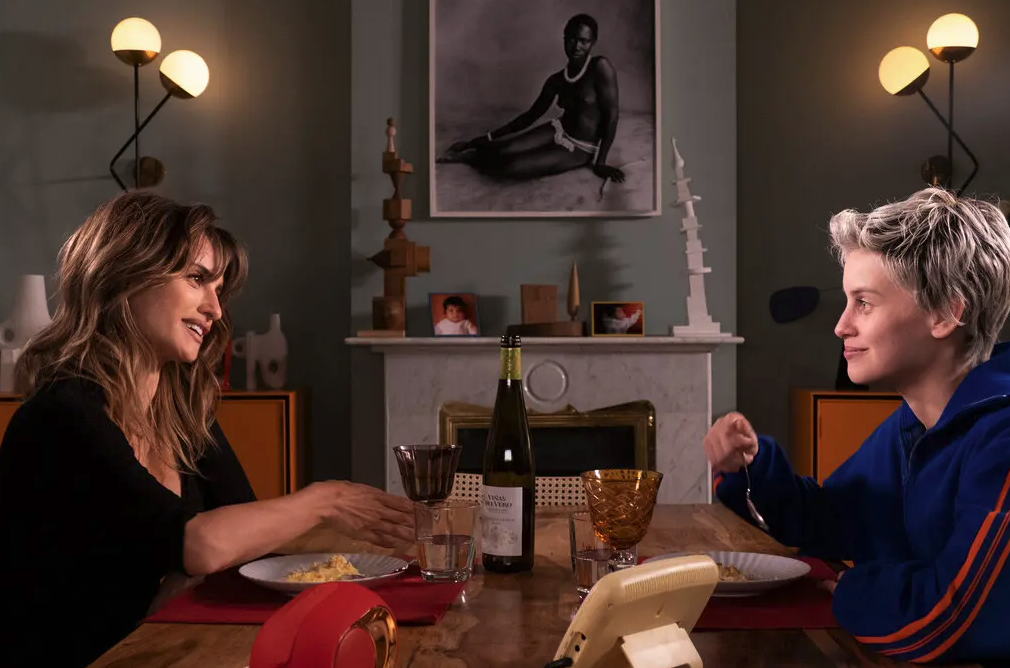 How enticing is this official, widely-used synopsis of Pedro Almodóvar’s Parallel Mothers?

‘Two single women – one middle aged, the other quite young – meet in a hospital room where they are both going to give birth.’

It’s about as enticing as ‘angry stand-up comedian falls in love with ethereal opera singer’ for Leos Carax’s Annette, or ‘college professor meets a younger woman while on holiday in Greece’ for Maggie Gyllenhaal’s The Lost Daughter. In all three cases, the central element that kicks off the real story, the intriguing ‘inciting incident’ or detail, goes unstated. Why? Because this element is held off until well into the film, and to divulge it in a first-release review would constitute a dreaded spoiler.

When it comes to the pleasure that Almodóvar’s movies frequently give, spoiling is indeed a problem. Intricate plotting with a melodramatic flair is among his specialities. Revelations, reversals, outrageous coincidences, seemingly marginal digressions that turn out to be central to the narrative: Almodóvar is a past master at orchestrating these storytelling delights. He engineers his films so as to surprise and amaze as they unfold on our initial viewing of them. There is time enough on later viewings, he wisely reasons, to dig into the other layers of style and theme.

So, you are going to have to make do with an elaboration of that bland synopsis for Parallel Mothers, and just take my word for it that what really happens in the course of its events connects up with the ideas it explores. Those ideas, to which I will allude, are inevitably going to seem a little abstract, unmoored. And, to tell the truth, this film is among Almodóvar’s more schematic ‘dramatic essays’. It’s as if he ‘reverse engineered’ the plot from a broad issue that he wished to address.

More on that later. For now, back to the synopsis. Janis (Penélope Cruz) is a photographer. Her line of work puts her in contact with someone she is keen to meet: Arturo (Israel Elejalde), an archaeologist who has some influence over which suspected gravesites, dating from the years of the Spanish Civil War and Francisco’s Franco’s subsequent dictatorship, can now be excavated.

For Janis, the stakes are high: her own great-grandfather and his other comrades were reportedly – according to knowledge passed down the family line – executed by the Falangists and buried in one of these secret, unmarked sites. Almost incidentally, as this historical and political campaign to uncover the past gains momentum, Janis and Arturo become attracted to each other sexually.

That’s what lands Janis in the maternity ward. It is there that she encounters Ana (Milena Smit), a troubled teenager whose backstory is recounted only much later in the film. Both are, effectively, single mothers. The crucial partners and carers in their lives are not men but other women: Janis’ no-nonsense pal, Elena (Almodóvar regular Rossy De Palma), and Ana’s rather more difficult mother, Teresa (Aitana Sánchez-Gijón).

The dilemma of Teresa in fact recalls that of Leda, the central character in The Lost Daughter: an opportunity to fulfil an intense professional ambition – in Teresa’s case, to finally break through as an actor – conflicts with the emotional demands of motherhood.

Almodóvar has long been the poet laureate of ‘chosen families’ – meaning, the families we actively make through friendship, allegiance and intimate experiences, not the biological families into which we are born.

Almodóvar has long been the poet laureate of ‘chosen families’ – meaning, the families we actively make through friendship, allegiance and intimate experiences, not the biological families into which we are born. Chosen families are expansive, inclusive, queer – if not always smooth sailing. This vision has constituted the core achievement of his best films, including Live Flesh (1997) and The Skin I Live In (2011). Over the course of four decades, the writer-director’s viewpoint has increasingly mellowed, without ever really altering its basic conviction: biological ties can also be drawn into the chosen family circle, as in his touchingly autobiographical Pain and Glory (2019).

In this regard, Parallel Mothers marks a curious inflection in Almodóvar’s evolving sensibility. Biological connections matter more here than in any previous story he has spun. To make that a convincing proposition on the interpersonal plane, the film overlays its big political concern: Spain must know, acknowledge and teach the hard lessons of its repressed history.

In Almodóvar’s case, this commitment to the political cause of remembering and witnessing surely carries a special, possibly even guilty resonance. After all, in the merry post-Franco days of the Movida Madrileña movement – the early 80s punk scene in which he launched his career as a prominent artist, actor and musician – he once made the dreamy, Utopian proclamation: ‘My films are the imagining of what things would be like if Franco had never been born.’ Parallel Mothers is his strenuous attempt to assert and affirm the exact opposite of that sentiment.

However, as I have suggested, there is something mechanical about the film’s overall construction. On the level of style, Almodóvar plays it relatively cool: the primary colours in José Luis Alcaine’s cinematography occasionally pop, the smallest details in Antxón Gómez’s production design are always telling, and the actors do uniformly splendid work – but we are far from the exciting, tightly patterned extravagances and artifices of Law of Desire (1987), for instance.

The major ‘queer moment’ (no spoiler!) in the convoluted plot is rather flat, and goes nowhere in the overall schema – it’s as if Almodóvar desperately wanted to reassure his faithful fans that he can still ‘go there’ if he pleases.

Parallel Mothers simply does not have the same taste for subversive transgression that registered, for example, in Antonio Banderas (as the director’s alter ego) in Pain and Glory deciding to adopt hard drugs at a relatively advanced age. Reconciliation is the keynote of this latest work – and reconciliation is not always the best ingredient in a melodrama. Only a few, fleeting interactions between characters hint, with fine irony, at a more complex, nuanced arrangement between the generations depicted – such as when Janis explains that her feminist mother named her after Janis Joplin (playing in the background during the scene), only to be greeted by Ana’s deflating question: ‘Who’s Janis Joplin?’

I have a theory about how Almodóvar works as an artist. He has declared the crux of it himself on numerous occasions: he begins (just as David Lynch does) from the dreamlike apparition, arising in his mind, of a particular scene or situation. It is not necessarily the start of a story, or its central premise; it could simply be an arresting exchange of dialogue or a sequence of gestures that ends up landing literally anywhere in the finished film.

Initially, it can be an entirely enigmatic fragment, mysterious even to himself. But it is from that initial vision that he organically created the deeply satisfying web of The Flower of My Secret (1995) and All About My Mother (1999), among other highlights in his career.

Parallel Mothers seems to have taken a different path of genesis. Almodóvar (I suspect) began from a concept about history and collective memory, and from there he worked backwards, sculpting characters and events to illustrate it. As a result, the different, multiple levels of the script do not mesh in an entirely convincing way.

At its worst, this tendency to schematisation has all but wrecked the work of once-revered directors including Atom Egoyan and Wim Wenders, rendering their stories lifeless and pre-programmed. Pedro Almodóvar, even at his least inspired, mercifully retains a good dose of wit, spunk and crafty flair.

Let’s hope he gets his full creativity back in gear for his forthcoming English-language debut starring Cate Blanchett, A Manual for Cleaning Women.

Women On The Verge Of A Nervous Breakdown (1988)

This black comedy starring Carmen Maura and Antonio Banderas brought Almodóvar to widespread international renown. When actress Pepa Marcos’ lover Ivan suddenly leaves her, she embarks on a strange journey to discover why. On the way she meets a variety of eccentric characters, including Ivan’s son from a previous relationship, his fiancee Marissa) and a Shiite terrorist cell.

In this drama starring Cecilia Roth and Penélope Cruz, Manuela, an Argentine nurse and single mother, loses her teenage son Esteban in a car accident. Hoping to escape reality, she travels to Barcelona to search for her son’s estranged father, a transgender woman named Lola.

A psychological thriller starring Antonio Banderas and Elena Anaya. This film was the first collaboration between Almodóvar and Banderas in 21 years. Ever since his wife was horribly burned in an auto accident, Dr. Robert Ledgard, a skilled plastic surgeon, has tried to develop a new skin that could save the lives of burn victims. With the aid of his faithful housekeeper, Ledgard tests a new skin creation on Vera, who is being held captive against her will.