Adrian Martin celebrates the virtues of the vulgar in this unique and deeply intellectual Romanian film.
Adrian Martin 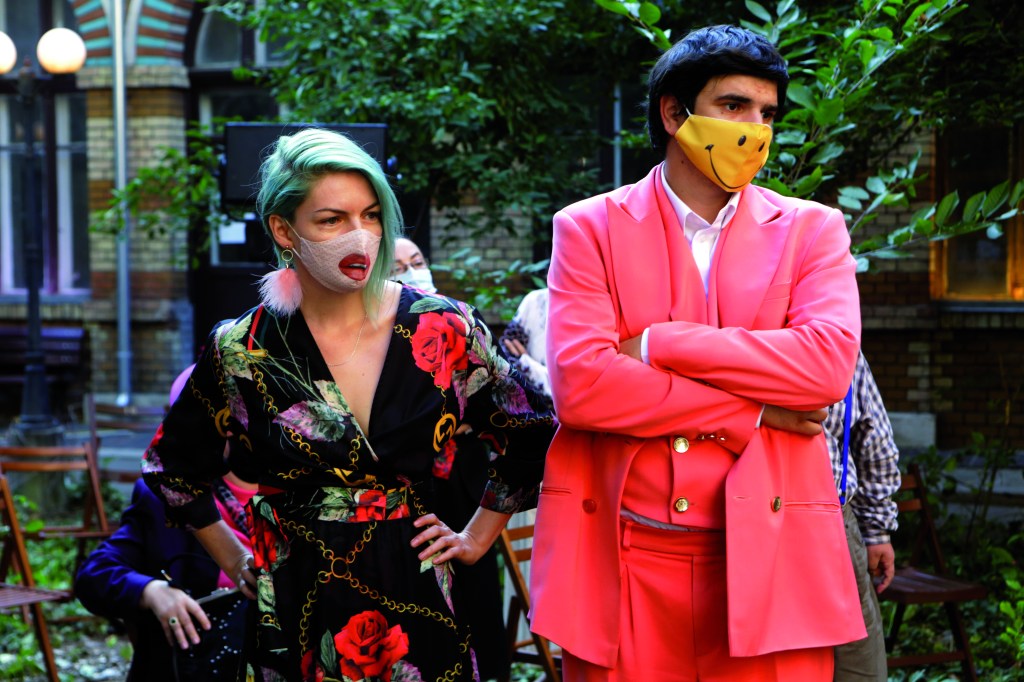 Bad Luck Banging is an epic of vulgarity. Few movies, in recent times, have made me laugh so much, and so loudly. Yet it is, at the same, a deeply intellectual work. There is no necessary contradiction in that: Luis Buñuel, for example, knew a thing or two about the liberating power of the vulgar.

Then again – and part of the film’s internal argument hangs on this – can it really be called pornography if it’s a married couple happily making love, and (what the heck) filming it at the same time, for an extra kick? Even here, in the most joyous and trouble-free moments of Bad Luck Banging, the director’s trademark mordant humour makes a cameo appearance: just beyond the door, but insistent, is the voice of a live-in parent blaring bland domestic reminders.

A privately made and viewed sex-tape is one thing; when it goes public, however, it becomes something quite different. Indeed, it would seem that it threatens to unravel the entire social order. Especially as Emi (Katia Pascariu), the woman on the tape, is a local school teacher. How did the damn thing get online? The proud husband, Eugen (Stefan Steel) – who scarcely figures in the ensuing action – placed it on a ‘protected’ site. Some protection! Soon, everyone has seen it. Some have even downloaded and shared it further – including Emi’s students and their parents. A cautionary tale!

The jolly oompah of a brass band cues the film’s title and its subtitle: ‘Sketch for a popular film’. Jude has indeed made a sketch – an essay pursued in different, successive styles – but his attitude to popularity is surely ambivalent and barbed. On the one hand, Bad Luck Banging is about things that are vitally important to all of us: sex, dignity, intelligence, winning and keeping the respect of others, justice and injustice. On the other hand, the vision of ‘ordinary people’ offered here is often withering: there’s no shortage of down-to-earth characters who are bigoted, small-minded and, frankly, rather horrible. This is the double-edged sword of vulgarity at work.

The official Part I, post-sex-romp, is ‘One-Way Street’ (and if that title reminds you of the cultural commentator Walter Benjamin, it’s no accident – he is among the many big guns name-checked in the final credits). Its early moments set-up Emi’s looming problem within the educational institution – and the fragile amount of support she can count on from her boss, the school’s headmistress (Claudia Ieremia). Emi sets out, on foot, for a parent-teacher meeting focussed solely on the matter of the sex-tape. And here Jude jams on the narrative brakes, in a disconcerting way.

Emi walks. And walks. Across a section of Bucharest for almost 30 minutes. It’s a document of the time in which it was shot: pandemic masks cover most faces. Occasionally, Emi stops at a shop, visits a friend or has a coffee. She makes calls on her mobile and buys presents for her kids. She’s briefly harassed by an elderly dude in a white suit offering her a flower. In almost every shot of this section, the camera follows Emi in a panning movement, and then wanders off her to gaze at something else for a while: some oddity of the urban landscape, or of mundane behaviour in the street. Many real-life ‘extras’ caught on film in this way glance with curiosity or suspicion into the camera lens.

Bad Luck Banging is an epic of vulgarity. Few movies, in recent times, have made me laugh so much, and so loudly. Yet it is, at the same, a deeply intellectual work.

It seems to me that Jude is paying tribute here to Jacques Rivette’s Top Secret (1998), in which we observed Sandrine Bonnaire making her way – not quite in real time, although it felt that way – to the place where she planned to kill somebody. Rivette wanted us to experience the banality of the trip on an equal footing with the thrill of suspense. Jude is blunter: he withholds anything resembling plot resolution (or even development) for quite a while to come.

Viewers will undoubtedly differ in their respective ranking of the various sections of the film. On a first viewing, I found Part I a bit taxing and frustrating, but I’m glad I stuck with it. Because the real gem of Bad Luck Banging is its second part, titled ‘Short Dictionary of Anecdotes, Signs and Wonders’. It’s quite a jolt at the start, since it bears absolutely no direct relation to the fate of Emi or the sex-tape. But it has much to say about many, many things of great import – and especially in regard to Emi’s own speciality, history. An outrageous audiovisual montage in the mode of Dušan Makavejev during his wildest, WR: Mysteries of the Organism (1971) period, it reveals the traumas of Romanian history (wars, State oppression, fascist enclaves, ideological brainwashing) with an offhand malice.

My favourite fragment in this part is footage of little kids dancing in a mass, public spectacle while singing the patriotic glories of war. This image receives the overlaid dictionary entry: ‘Children: political prisoners of their parents’. No truer words were ever inscribed! The film is, on this level, a very curious sort of love/hate letter from Jude to his fellow Romanians. But the very least that can be said of this distinguished writer-director is that he certainly has the courage of his vulgar convictions – vulgar in the very best senses of the word.

Part III, at the 62-minute mark, brings it all back home. Jude labels it a ‘sitcom’; he bathes it in suitably unreal primary colours and repeatedly uses the most mechanical-looking zoom-effect available. Emi, seated at a desk in a courtyard garden, at last faces the parents. And what an unlovely bunch they are: moralistic, prurient, loudmouthed, hypocritical. One guy is decked out in a military costume and complains that fascist sentiments are outlawed; another holds forth with his view that only whores suck cocks. Slander of Romania’s gypsy population runs rampant, even when it is completely irrelevant to the topic at hand. As Emi sarcastically remarks: ‘The more idiotic an opinion, the more important it is’. There’s even a priest present, wearing a mask that (in a surreal touch) has the words I CAN’T BREATHE printed on it; and a mother who accuses Emi of being on the payroll of Mossad (‘How dare you indoctrinate our children with filthy Jewish propaganda?’).

The vulgar comedy swings in all directions here, and nothing emerges unscathed. Jude targets old-time religion as well as new-fangled political correctness, and everything in-between. For instance, when one intelligent and kindly gentleman, Marius (Alexandru Potocean), intervenes to defend Emi in this open discussion, he is instantly shut down as a ‘mansplainer’! There’s something to offend everyone.

On one of its many levels, Bad Luck Banging is the blackest of black comedies. Jude embraces the deepest pessimism, cynicism and even misanthropy in his vision of both individuals and society. People are thickheaded and the social structure is hopelessly broken-down; narrow-minded stupidity will always find itself reinforced by the insane bureaucratic rituals that strangle everyday life. It’s somewhat facile to ascribe such a bleak sense of humour to the Eastern Bloc nations and their past experience of Communism (an experience then corrupted further by the sudden influx of capitalism) – even if there’s an element of truth in that journalistic stereotype. Nonetheless, we can wish and hope that someone will make a portrait of Australia that is equally, irredeemably dark. Perhaps the Juice Media team (of ‘Honest Government Ads’ online fame) might be encouraged to move into feature production?