Everything Everywhere All at Once review: bonkers but brilliant

If you’ve somehow snoozed on Michelle Yeoh’s career, this demented and hugely enjoyable film is a great place to start.
Stephen A Russell 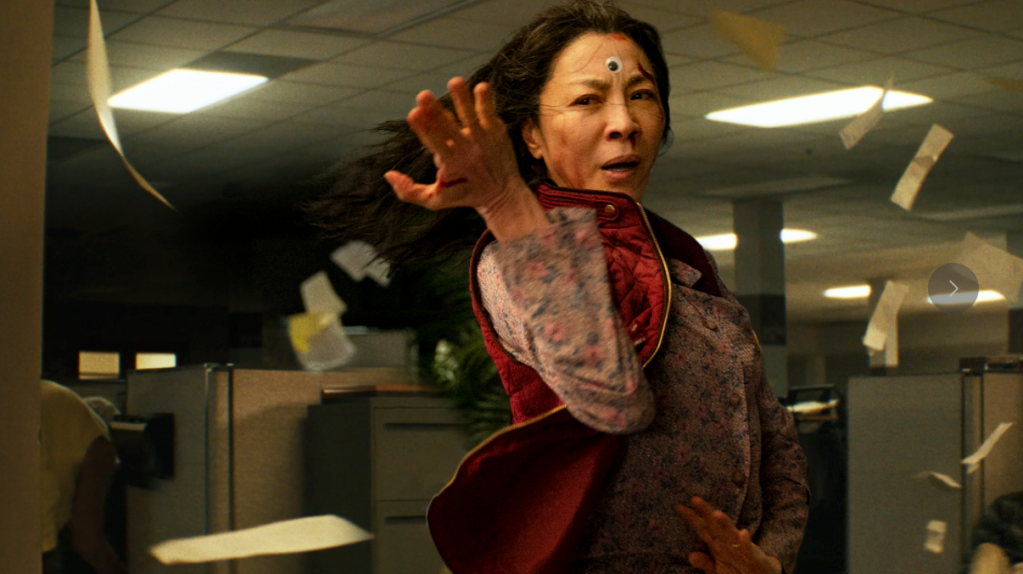 It’s oft said of The Return of the King, Peter Jackson’s 11-Oscar-winning grand finale to The Lord of the Rings trilogy, that as cherished as it is, it faffs on a bit too long with multiple cheesy endings. There’s a touch of that at play in the sweet, verging on saccharine, final stretch of Everything Everywhere All at Once.

Still, this latest surreal slice of cinema from the brains behind farting corpse film Swiss Amy Man, the directorial duo that goes by Daniels (Kwan and Scheinert), totally earns it.

That’s pretty much down to the return of the queen, living legend Michelle Yeoh. Not that she’s ever really been away since kicking up a storm performing her own stunts in wild Hong Kong action movies such as the 1985 classic Yes, Madam!

Since then, she’s turned a recurring guest spot in Stark Trek: Discovery into a forthcoming spin-off show, and mainlined the Marvel juggernaut with a blink-and-you’ll-miss-it appearance in the Guardians of the Galaxy sequel, and a more prominent supporting role in last year’s Shang-Chi and the Legend of the Ten Rings. Umpteen Avatar sequels wait in the wings, while she also stole the show playing the not to be messed with matriarch Eleanor in 2018’s game-changing rom-com Crazy Rich Asians.

Basically, if you’ve somehow snoozed on Yeoh’s career, it’s time to catch up quick. Hopping onto the universal mayhem of Everything Everywhere All at Once is a brilliant place to start. She plays Evelyn, a frustrated laundromat owner who’s as over the never-ending accounting involved in the onerous tax return process as she is her tired marriage to well-meaning husband Waymond.

He’s played with lovably rumpled charm by Vietnamese actor Ke Huy Quan, who broke through as a child actor in movies such as The Goonies and Indiana Jones and the Temple of Doom before the gigs cruelly dried up. His is a welcome return.

There’s no real animosity between the pair; things have just fizzled out. Most of the excitement in their relationship comes from how they’ll manage the impending drama of wayward daughter Joy (Stephanie Hsu of The Marvelous Mrs. Maisel fame). She’s in a queer relationship, and Evelyn’s not coping with it all that well, mostly through anxiety over how her crotchety father (James Hong), visiting from China, will take it.

All of which makes this sound like a sweet slice of life comedy focused on the Asian-American experience. But just when it looks like the family is about to be undone by errant business expenses at the hands of overzealous Internal Revenue Service agent Deirdre (a wonderfully pursed-lipped Jamie Lee Curtis in one of the zaniest performances of her remarkable career), the film takes a surreal tilt into the sublime.

Appearing as if suddenly possessed, a mighty fighting Waymond reveals that there are a multitude of alternate realities unspooling from any given moment, and that an entirely different him can temporarily hijack this body by doing something surreal.

It doesn’t make any sense, but it doesn’t have to. Just surrender yourself to this bonkers but brilliant film that’s a demented fusion of Yeoh’s high-kicking origins and the multiversal madness currently unfolding in the Marvel movies. Of course, Evelyn learns how to channel her bad-arse selves while skipping through parallel lives that include a version of the film star we know and love, and a nod to her Crouching Tiger guru too.

It gets barmier and barmier as she and Waymond dive headlong into a sensory overload of what-could-bes, all while attempting to head off a big bad that hits far too close to home.

And that’s when we wind up with the final act gut punch. Because try as you might, I dare you not to tear up at the unexpectedly emotional sight of two rocks with googly eyes having a heart-to-heart. You’ll also scream laugh at sausage fingers, probably the best Kubrickian visual joke ever, and the delayed gratification of a butt-plug gag just hanging there.

If it misses a trick, it is in not meta-textually deploying the vocal talents of Bradley Cooper when a talking racoon shows up to ridiculous effect. But, as with the mooshiness overload, we’ll forgive the Daniels. They’ve championed Yeoh in a glorious spectacular erupting with abundant wonder. And also Curtis in what might be a career-best turn, stealthily delivering note-perfect tenderness.

It all adds up to googly-eyed gorgeous stuff.

Everything Everywhere All at Once

There’s a reason why movie lovers flocked to the latest live-action Spider-Man movie in droves despite COVID-reluctance: it deploys not one but three webslingers in a grand romp. But it’s not the best Spider-Man film to go multiversal. That honour belongs to Bob Persichetti, Peter Ramsey and Rodney Rothman’s heart-soaring animation Into the Spider-Verse. A visually astounding adventure, it’s a truly beautiful manifestation of the inclusive joy of comic books that soars thanks to Shameik Moore’s awkward teen Miles Morales and his merry band of alternate versions of himself.

A majestically unsettling film, this bleak but dazzling dystopia is rich with unforgettable imagery. Loosely adapted from the Craig Harrison novel, it’s exhilaratingly directed by Geoff Murphy and stars a dashing Bruno Lawrence (who also co-wrote) as a disillusioned scientist whose suicide is only the start of his troubles. Awakening in a world wiped almost clean of humanity, the only survivors he discovers appear to be variants of who they were before. The very building blocks of the universe are oscillating wildly. The final scene may not provide all the answers, but much like Planet of the Apes, you’ll never forget it.

Filmmaker James Ward Byrkit takes intimate apocalypses to the next level with this disturbing chamber piece. Playing out almost entirely within the confines of an increasingly fractious dinner party, guests including Hustlers director Lorene Scafaria and Buffy star Nicholas Brendon, become disturbed by a passing comet. With little more than shaky camera work, improvised dialogue and a Schrödinger’s cat primer, Byrkit makes us believe that the walls between worlds are collapsing and gives us the willies.