In the wrong hands, period pieces can reinforce sexism, racism and homophobia – not here.
Izzie Austin 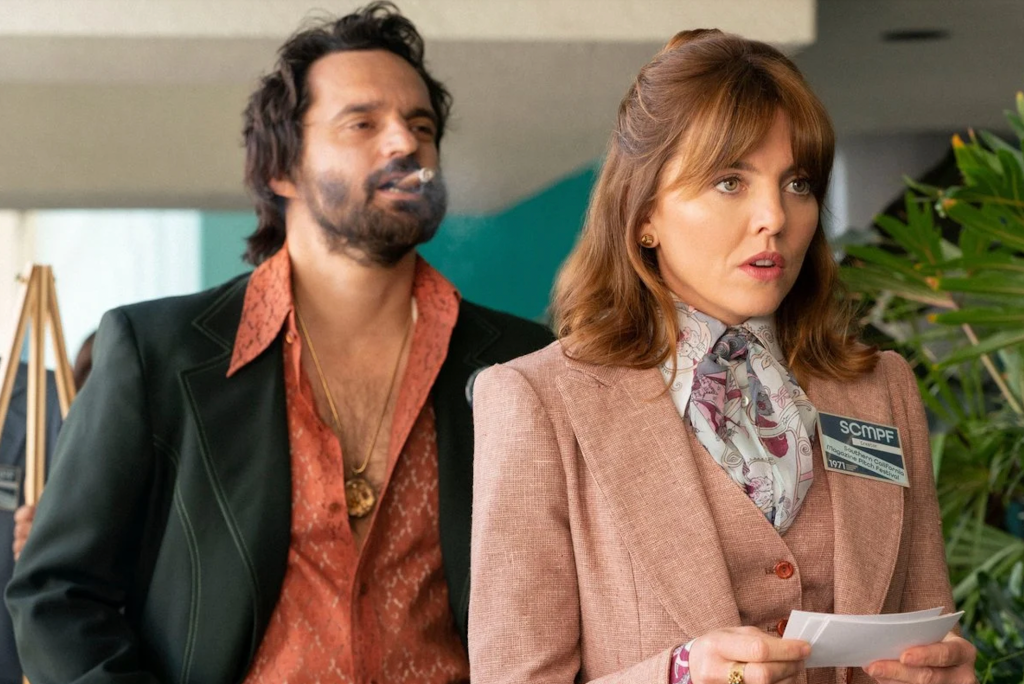 Like many of us, I was enamoured with Mad Men. I would cheer for the characters’ triumphs, I would appreciate the gorgeous mid-century aesthetic, and be shocked by the spectacle of misogyny, but be comforted that it was all in the past.

Then I would head into work at a failing video rental store, drop the Mad Men DVD box set into the returns chute and start my shift, where customers older than my father would stare at my breasts while they threatened to tell my boss they thought I was incompetent.

The risk of period pieces that engage with their characters’ regressive attitudes is that they can consign those attitudes to the past. A film might make a spectacle of a character’s racist, sexist, homophobic, or ableist attitude, but wrap it in the comforting notion that these attitudes are something that society has grown out of.

I began watching Minx, a new series streaming on Stan, thinking it would have a similar attitude towards the misogyny of the 1970s. The series follows Joyce (Ophelia Lovibond), an aspiring journalist who spends her days in a phone bank selling magazine subscriptions, and spends her weekends trying to start her feminist periodical, Matriarchy Awakens.

A chance encounter with Doug (Jake Johnson), whose sleazy publishing house produces magazines with titles like Milky Moms and Bodacious Butts, has her turning Matriarchy Awakens into Minx, a magazine that intersperses journalism and feminist theory with pictures of naked men.

A series that begins as though it will follow one woman’s journey to success as she attempts to fix the world with determination and individualistic hypercompetence very quickly turns into an exploration of the complicated relationship between feminism and sex.

After the sexual revolution of the 1960s, many feminists began to wonder what their place in the revolution really was. Feminist writers responded in different and sometimes contradictory ways to a sexual revolution that centred mens’ pleasure. American writer and activist Audre Lourde wrote about the importance of eroticism as a means of liberating womens’ sexuality from patriarchal capitalism.

Taking the opposite approach, American writers Andrea Dworkin and Catharine McKinnon became anti-porn activists, arguing that pornographic images not only depict harm but are inherently harmful to see.

Those arguments all happened in the decades after Minx’s first season takes place, but they are present in spirit. What makes Minx so interesting is its refusal to flatten feminist thought into just one thing, instead exploring varying attitudes towards sex, and points of view that grow and change.

Joyce is caught between two worlds: the high-society, respectable world where she feels she belongs, and the pornographers who will pay her. The offices of Bottom Dollar, Doug’s publishing house, are full of people who would be cast out of Joyce’s tennis club: poor people, queer people, people of colour, sex workers.

Joyce is uncomfortable in her new surroundings, but quickly learns that the respectable society she is used to is just as perverted as her new coworkers, they just put more effort into hiding it.

When Joyce and Doug attempt to find advertisers for Minx, Joyce is dismayed that the only company who will advertise with them is a sex toy manufacturer. She feels like she has succeeded when an executive at a cosmetics company agrees to buy ad space, but it is revealed that he will only make the deal in exchange for a night with the model Bambi (Jessica Lowe). Doug may sell images of women’s bodies, but he doesn’t expect complete access to them.

An important counterpoint to Joyce is Councilwoman Bridget Westerbury (Amy Landecker), who says she was elected to ‘restore the values’ of her community. Bridget is a woman who has achieved success by projecting an image of conservative, traditional womanhood, and who believes that feminism will cause more harm to women than good. She wants to shut down the pornography businesses that ‘exploit young girls, drive down property values, and lead good men to stumble in their faith’.

She applauds her girl scout troop for their resourcefulness and chastity, and when they pose for a photo, she stresses that she wants to see ‘big smiles, straight spines, and flat tummies,’ before adding: ‘Suck it in, Ruth.’

Bridget might not be selling photos of women for money, but she is objectifying them. With the authority of the government, she is letting Ruth know that her worth is in her appearance, and her appearance is flawed.

At time of writing, Minx has only released four episodes of a ten-episode season, and there are a lot of aspects I’d like to see explored as the series continues. Race is brought up in passing, such as when Tina (Idara Victor) points out that while Joyce was correct in assuming Tina is a secretary, she only assumed that because Tina is black.

Similarly, photographer Richie’s (Oscar Montoya) sexuality is an important part of his character, but so far not explored beyond him being the only photographer who is comfortable shooting naked men.

Given its track record, I have confidence that the series will do justice to these topics, but for now I’ll just have to be content with what is a refreshingly complex exploration of feminism.

Minx is streaming on Stan now.