The Kit Kat Klub first graced the silver screen half a century ago – what lessons can it teach us in 2022?
The Conversation 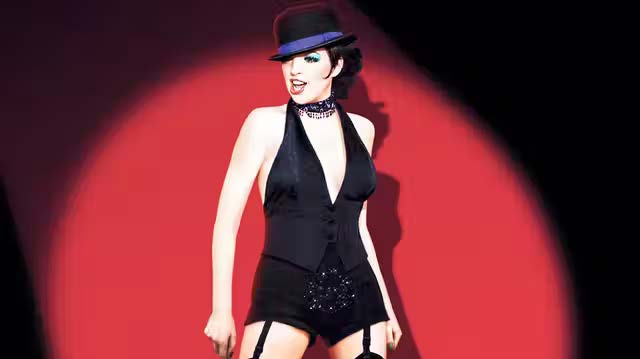 A radical musical about 1920s Berlin still resonates in the 2020s. Image: IMDB.

In the 1970s, many critics and filmgoers had given up on the movie musical. While the mid-60s had seen the phenomenal successes of The Sound of Music, Mary Poppins and My Fair Lady, most subsequent attempts to adapt hit Broadway shows or develop new film musicals did not make back anything close to their large budgets.

Bob Fosse’s 1972 film version of the 1966 Broadway musical Cabaret would turn out to be that radical revision.

While the film is undoubtedly the most famous version of its story of ‘divine decadence’ in Weimar Republic era-Berlin, the material it is based on goes back long before 1972.

In the late 1920s, young gay English writer Christopher Isherwood travelled to Berlin to soak up some of the sexually and artistically liberal lifestyle. He wrote about his experiences in a series of short stories assembled as the novel Goodbye to Berlin in 1939, focusing on his complicated friendship with a cabaret singer named Sally Bowles.

John van Druten adapted (and sanitised) the novel into a hit 1951 Broadway play, I Am a Camera, which was itself turned into a movie in 1955.

Producer/director Hal Prince spearheaded the transformation of van Druten’s play into the Broadway musical Cabaret in 1966, with dialogue by Joe Masteroff, music by John Kander and lyrics by Fred Ebb.

Van Druten’s 1950s audience wasn’t quite ready for a fully accurate picture of hedonist 1920s Berlin. But by the 1960s, tastes had loosened enough the stage musical could daringly juxtapose a portrayal of the era’s sexual freedoms with the violence of the growing Nazi movement – but it was still very much a ‘hetero’ version of the material.

Read: Born to Be: gender, hope and a musical surgeon

Finally, by 1972, director/choreographer Bob Fosse and screenwriters Jay Presson Allen and Hugh Wheeler could return to the feeling of the 1920s to present an even more frank portrayal of the period on film.

The team’s most important structural decision in making their film adaptation was to limit the musical numbers to the stage of the titular cabaret, the Kit Kat Klub.

Cabaret is not a musical like My Fair Lady or Singin’ in the Rain: the characters do not spontaneously burst into song. Instead, the musical numbers we see performed in a stylised manner in the cabaret comment obliquely on the realistically presented events of the plot.

This lack of stereotypical song-bursting is probably one reason why the film was so successful in 1972 amid many traditional musical flops. The musical numbers become modernist commentary rather than the illustrations of romantic idealism typical of the genre.

This style of gritty modernism was very much in the air at the time: Cabaret’s competitors at the Academy Awards included The Godfather (which beat Cabaret for Best Picture) and Deliverance (another film with creepy musical commentary).

Much of the star power of the film comes from Liza Minnelli as Sally Bowles. Some Isherwood fans (and Isherwood himself) criticised Minnelli’s performance. Isherwood’s original portrait was of a rather untalented Englishwoman, but here was an outstanding member of American showbiz royalty.

Despite this criticism, Minnelli’s interpretation works well within Fosse’s vision. Her star power is undeniable.

Fosse fills the film with expressive faces, sometimes modelled after specific artworks of the period, and Marisa Berenson and Franz Wepper give sensitive portrayals of a Jewish department store heiress and her down-at-heel suitor.

But at the centre of the film stands the ‘Emcee’ of the Kit Kat Klub, famously embodied by Joel Grey.

The Emcee is a mysterious figure. We primarily see him onstage performing, or backstage casting enigmatic and sinister glances at the camera, breaking the fourth wall. He seems to be the only character fully aware Berlin is riding for a fall, but he keeps his secret. He is at once complicit and refractory. He entreats us to ‘leave [our] troubles outside’ – so he and his cabaret acts can distract us from what is really going on.

The film’s characters seek liberation from social and sexual mores, but their attempts are halted by wider political forces we know will only make those mores even more strict. While the Nazis were eventually defeated, Cabaret nonetheless offers a cautionary tale.

Ultimately, Cabaret is a depressing film, and therein lies its continued power. Our world is still full of Emcees hiding villainy underneath their sly smiles.