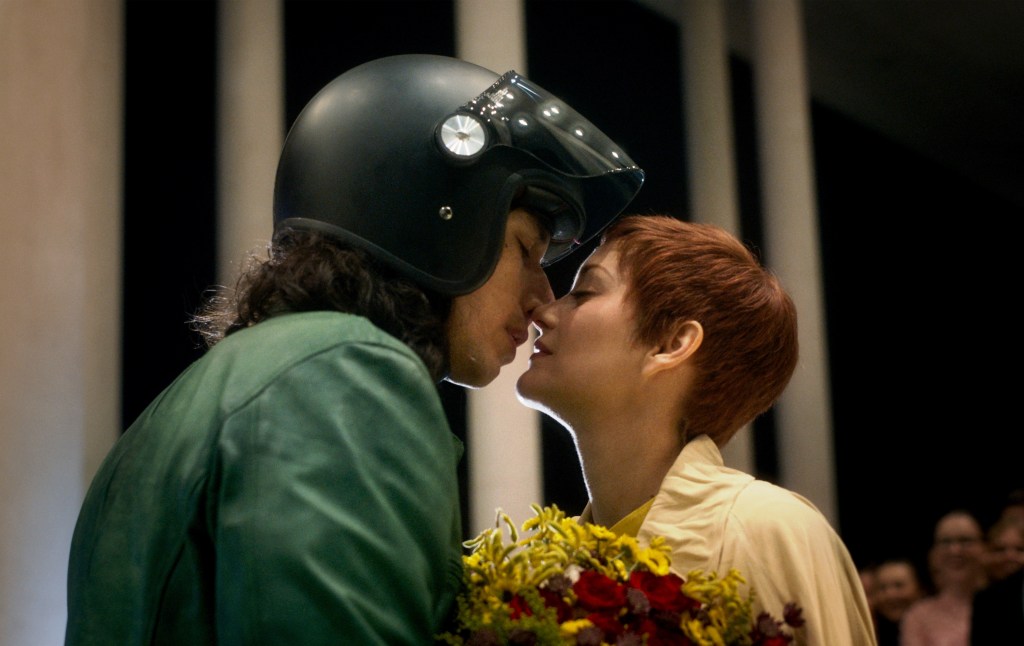 Most films start in an ordinary, banal way, but in Leos Carax’s Annette there is a ritual of beginning. Over the production logos, a voice – Carax’s own – mock-solemnly instructs us not to laugh, shout, fart or even breathe during the entire two hour and twenty minute running time. Okay. Then there is what sounds like a scratchy snippet from an old gramophone recording: the French nursery rhyme devoted to ‘mon ami Pierrot’. Then, a recognisable location (the legendary recording studio The Village in Los Angeles), but even that is not given to us in an immediately legible, visible way. The image begins in darkness, with electronic static pulsating; once the musicians arrive, close shots of them plugging in their instruments flicker from obscurity from clarity, and flashing superimpositions create momentary chaos.

Finally, a prompt from the maestro at the mixing dark – Carax again (accompanied by his teenage daughter, Nastya, to whom the film is dedicated): ‘So, may we start?’ Sparks – brothers Ron & Russell Mael with their back-up band – oblige with a song titled, logically enough, ‘So May We Start’. But no sooner has the song kicked off than the brothers, and seemingly everyone else in the vicinity, take a determined walk together, out the door and down the street. It is a rousing spectacle, reminiscent of the incredible ‘entr’acte’ in Carax’s previous film, the great Holy Motors (2012). By the end of the song, two stars – Adam Driver and Marion Cotillard – have detached from the group and metamorphosed into their fictional characters, respectively Henry McHenry and Ann Desfranoux, each off to give a public performance.

Everything that is magnificent in Annette is already there, in embryo, before the film’s title appears on screen at the six-minute mark. The beguiling continuum between homely detail (the Carax family) and grand theatrics. The perfect fusion of two quite different aesthetics – that of Carax and of Sparks (who wrote the initial story) – into a co-auteur vision. The constant oscillation between the most primal, even childlike forms of storytelling (like fairy tales) and the most experimental, advanced techniques of cinema. The regal confusion signposted by Sparks in their lines: ‘But where’s the stage, you wonder, is it outside or within?’ And, above all, the shotgun marriage of zany humour (fart jokes) with the intimation of sheer tragedy ahead. For Annette will be, as we are promised by the lyrics, ‘a tale of songs and fury with no taboo’, and it comes with a disturbing rider: ‘If you want us to kill too, we may agree’.

Read: TV Review: The Pursuit of Love is delicious

Both Henry and Ann, as we soon see, engage in two variations on dark, bleak art. Ann’s is the high art form: opera, with its beautiful, cathartic murders and suicides. As Henry acidly comments, Ann as a diva ‘dies and bows’ every night. He, on the other hand, is a provocateur stand-up comedian in a tradition that stretches from Lenny Bruce to Louis C.K, via the strident anti-comedy stylings of Rick Alverson’s films (such as Entertainment). Introduced like Jake La Motta preparing to enter the boxing ring in Raging Bull, and eating a banana since he is billed as the ‘Ape of God’ – Carax loves his animal metaphors – Henry is out to shock, unsettle and confound his audience. But, in an age when even controversy is a commodity lapped up by masses of adoring fans (who already seem to know most of the punchlines), isn’t Henry’s stage routine just as predictable and unthreatening as Ann’s? So this anti-hero is compelled to ever further extremes, which include a heavy dose of self-destructiveness.

Amidst glimpses of mass media frenzy (as in his episode of Tokyo!, Carax offers a glacial parody of ‘entertainment news’) and social media mania concerning this unlikely ‘Beauty and Beast’ union, Ann and Henry’s whirlwind romance leads to a much-publicised pregnancy. At this point, Annette introduces what I refuse to call a ‘plot twist’, since it is something that no one inside the fiction ever even comments on. I am not going to spoil it for you, because it’s best to see this movie completely innocent of how it unfolds. Suffice to say, this rather important detail – which did not exist in Sparks’ original story outline – arises from the freedom that Carax proudly claims for himself as an artist: he can tell a story in any way he chooses, and use any tools at his disposal to represent and depict its deepest content.

What is this content? After the paroxysmic romanticism that reached its peak in The Lovers on the Bridge (1991), Carax’s cinema took a fully pessimistic turn in Holy Motors. His characters have become quasi-automatons, caught in hellish cycles of perpetual performance. Their allotted ‘role’ is their destiny, whether they like it or not. Whether we consider them to be grand figures from mythology or tawdry types from pop culture, the end result is the same: they’re stuck in repetition. Even cute little Annette – literally, ‘little Ann’ – is condemned to embody two, distinct sides of her mother’s personality.

Nowadays in the Carax universe, true love remains rapturous, but is also inevitably doomed. And when Ann starts to have doubts about her man and his aggressive compulsions, so do we – there are reminders here of some of the greatest classic Hollywood melodramas, including Nicholas Ray’s In a Lonely Place and the 1950s rendition of A Star is Born. A startling scene that expresses the onset of these complications might suggest that Carax is mocking the current situation of widespread ‘calling out’ of potential sexual abusers.

as Annette develops, it sincerely becomes one of the most extraordinary documents of the #MeToo era – and an infinitely higher artistic achievement than, say, Promising Young Woman

However, as Annette develops, it sincerely becomes one of the most extraordinary documents of the #MeToo era – and an infinitely higher artistic achievement than, say, Promising Young Woman. Carax may not believe (as I do not believe) that all men are inherently ‘toxic’, but in Annette he isolates a certain kind of masculinity, embodied by Henry and so superbly conveyed by Driver, and subjects it to an excoriating critique. Yet the drama remains, to the very end, complex, and the emotions it arouses are tearingly ambivalent – the final duet between Henry and Annette (Devyn McDowell) had me bawling my eyes out.

Annette’s brilliant cinematographer Caroline Champetier has admitted that, when Carax first outlined the project to her in 2015, she was disconcerted by its resonance (suitably transformed for the purposes of drama) with aspects of Carax’s own life. There has always been an intimate vein in his films – sometimes cryptically so, as in the work of one of his avowed mentors, Philippe Garrel. This personal connection – and the need to somehow mirror it, however distorted, in the finished result – is clearly what drives him. In 2011, Carax’s partner, actor Katya Golubeva (from whom he was separated at the time) died – and the persistent rumour that she had died by suicide found its reflection in the wrenching musical sequence (‘Who Were We?’) featuring Kylie Minogue in Holy Motors. Nastya Golubeva Carax, who appears in both that film and Annette, is their daughter. The guilt – rational or not – that must linger for the surviving partner of one who suicides is a major undertone in Annette.

And that’s not all in the ‘backstory’. Katya Golubeva’s partner before Carax was the Lithuanian director Šarūnas Bartas; Carax was a close friend of the couple during the 1990s, and acted in Bartas’ film The House (1997). The daughter of Golubeva and Bartas – Ina Marija Bartaité, who was featured in his haunting Peace to Us in Our Dreams (2015)  – died in a road accident at the age of 24 in April of this year. And, in recent times, Bartas has faced multiple charges of sexual harassment and assault. If it seems merely extraneous or gossipy to cast the shadow of Bartas onto Annette, let it be noted that the ‘third party’ in Carax’s tale, a man who might also be Annette’s biological father and is identified only as ‘The Accompanist’ (played with verve by Simon Helberg), eventually rises to the role of orchestra conductor – and in Carax’s Pola X (1999), Bartas was the guru-like conductor of a modern noise-orchestra.

As a musical, its level of inventiveness is astounding; each sequence functions as a mini-movie in its own right.

Beyond its undeniably dark heart, Annette is, paradoxically, the most exhilarating of films. As a musical, its level of inventiveness is astounding; each sequence functions as a mini-movie in its own right. For the most part eschewing strict dance steps (and hence operating in the tradition of musicals by Jacques Demy and Christophe Honoré) but always creating intense movement, Carax stages each song within a complex space mingling ‘outside’ and ‘within’ – and includes everything from a delightful sex scene to a verse from Ann sitting on the toilet. The musical styles vary freely in Sparks’ fantastic score, from Stephen Sondheim homage to raucous rock, with a little echo of Bertolt Brecht/Kurt Weill in-between. We are here light years away from the comfortable irony of the current Apple TV series Schmigadoon!, with its endless sarcastic patter about ‘breaking into song’ and its tendency to choreograph every number as if on a crowded Broadway stage two inches in front of the protagonists’ noses.

There are hundreds of things to say, at length, about this film; I’ve only started to scratch the surface of a work that (like every Carax movie) I will watch and study many times over. Let’s put it in a nutshell, for now: Annette is a masterpiece.

Annette is in general release from 26 August where cinemas are open.