What can we learn about the state of our environment through films made in Australia? Quite a lot, according to the new Seeing Green podcast.
Belinda Smaill 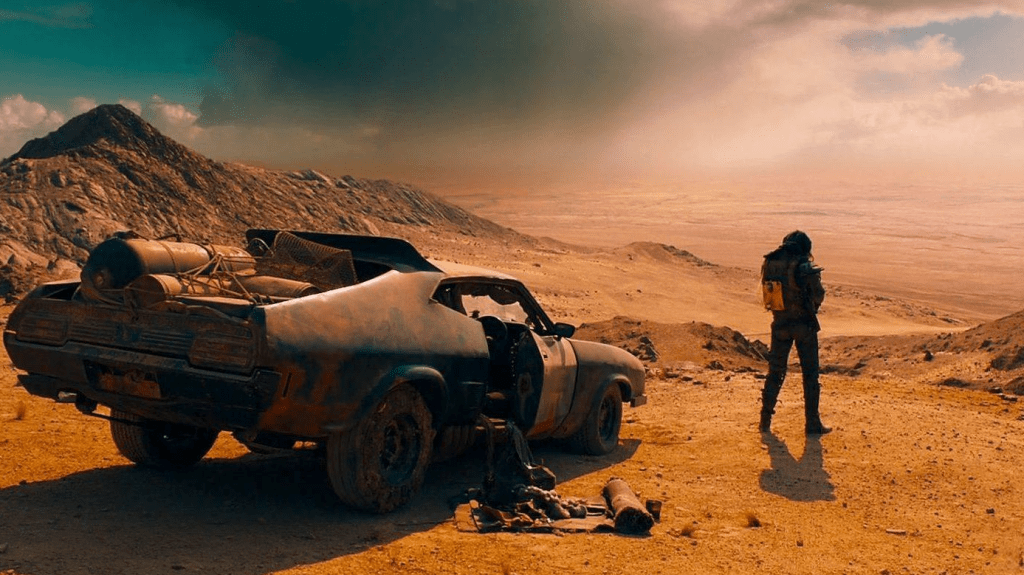 This article was co-written by Associate Professor Belinda Smaill of Monash University and film scholar and PhD candidate Melanie Ashe.

We wouldn’t be the first to point out the Mad Max series of films visualise a future of ultimate climate catastrophe. Dusty and resource-scarce, civilisation as we know it has collapsed and is now overrun by lawless gangs.

That world, and others presented in Australian film, is the focus of Seeing Green, a new podcast hosted by Triple R host Dylan Bird that we are both involved in producing. So far, there have been episodes on Wake in Fright (1971), Storm Boy (1976) and Rogue (2007) as well as the George Miller’s Dystopian franchise.

The podcast takes a fresh look at Australian cinema, asking questions about how films have created a visual and narrative blueprint for the way we relate to the natural environment. Rather than simply exploring how films tell stories about the outback, the beach or the bush, we invite different guests to explore questions of environment, ecology and sustainability through one well-known film each episode.

George Miller reportedly told his crew before filming Mad Max: Fury Road (2015) to imagine that ‘all the worst case scenarios that you have seen on the news have come to pass’. The director’s vision was sadly prescient given the intensification of extreme weather events such as the recent flooding Australia, more frequent and fiercer bushfires, a pandemic possibly fuelled by deforestation, and global conflict over resources.

The Mad Max episode features Dr Kathryn Lucas-Healey, Research Fellow at ANU’s College of Engineering and Computer Science, who explores the question of petroleum: drilling for oil or oil refining. While the Fury Road does not explicitly show these activities, it doesn’t have to for the viewer to be aware that it references a reliance on oil-based cultures.

The society in power in Fury Road is one that fetishises and worships car culture. In a world where vehicle bound mobility is the only way of surviving the harsh terrain, petrol or ‘guzzolene’ is one of the key currencies. Petroleum also exists as a symbol of power in the film’s rich and detailed production design.

Fury Road’s villain Immortan Joe proudly wears a (petroleum based) plastic breast plate. One of the only refined petroleum products in the film, Joe’s plastic costume signifies the coveted nature of petroleum in addition to his authority.

We can also think about how the film is implicitly about extraction through its production context. Much of the franchise – especially the films shot in Australia – has been captured against the backdrop of mining communities. Mad Max 2: The Road Warrior (1981) was shot on old mining roads and abandoned mine sites around Silverton, NSW and Mad Max 3: Beyond Thunderdome (1985), around the opal town of Coober Pedy, South Australia.

Those films are careful to present the ‘nowhere’ place of Max’s world, playing down the existence of these mining communities. Nevertheless, they capture the visible evidence of Australia’s extractive histories, and the legacies of environmental destruction and colonial violence left in their wake.

Make do and mend

While Fury Road brings a story replete with savage societal customs, it also shows a society’s ability to reuse and recycle. Any scrap from the countless car explosions in the film are gleaned and refitted, resulting in the cars of Mad Max’s eclectic DIY aesthetic. This essentially means that Fury Road’s society is operating under a circular economy resulting in minimal waste.

Lucas-Healey, an expert on electric vehicles, describes how most contemporary vehicles are too complex to easily repair – they are ‘computers on wheels’, with complicated circuitry and high servicing costs. Unlike the combustion vehicles of the Mad Max world, there is not yet a robust repair culture around newer vehicles. And so, Lucas-Healey calls for us to think about alternatives:

‘What is a clean, electric future that is tactile and tangible, and that we can fix ourselves and build ourselves without needing highly qualified people and really advanced manufacturing facilities?’ she asks. ‘Like, how can we make solar panels ourselves?’

Thinking about the possibility for repair in the apocalyptic setting of Mad Max helps us to imagine what kinds of futures, apocalyptic or otherwise, may be more sustainable and accessible.

Why Cinema and the Australian Environment?

Cinema plays a crucial role in shaping our responses to the natural environment.

Looking at well-known examples of Australian cinema is a good way to trigger debate about how we can revise our understanding of the environment. We’ve talked a lot about the concept of ‘landscape’ in Australian films but that’s a different idea – it’s more about the scenic composition of a shot or scene.

What about the species that star in Australian films, their actual role in the ecosystems versus their cultural characterisation? What about the ways certain scenes bring the sensory and emotional experience of a particular natural environment to the viewer? What about denaturalising colonial settler attitudes to the continent and its ecologies, as presented in film, and exploring the importance of Indigenous approaches to country and law?

Our relationship with our environment is crucial, and the stakes are only getting higher. Films play a major – and under-explored – part in how we conceive of that relationship.

Find out more about the Seeing Green podcast here.

Seeing Green is the result of research undertaken as part of an Australian Research Discovery Project. Professor Therese Davis (Swinburne) and Associate Professor Belinda Smaill (Monash) are the executive producers. The series is produced by Britta Jorgensen and hosted by Dylan Bird.