Even stronger in its second second season, the ABC's 'Total Control' is a complex and satisfying political thriller, says Mel Campbell.
Mel Campbell 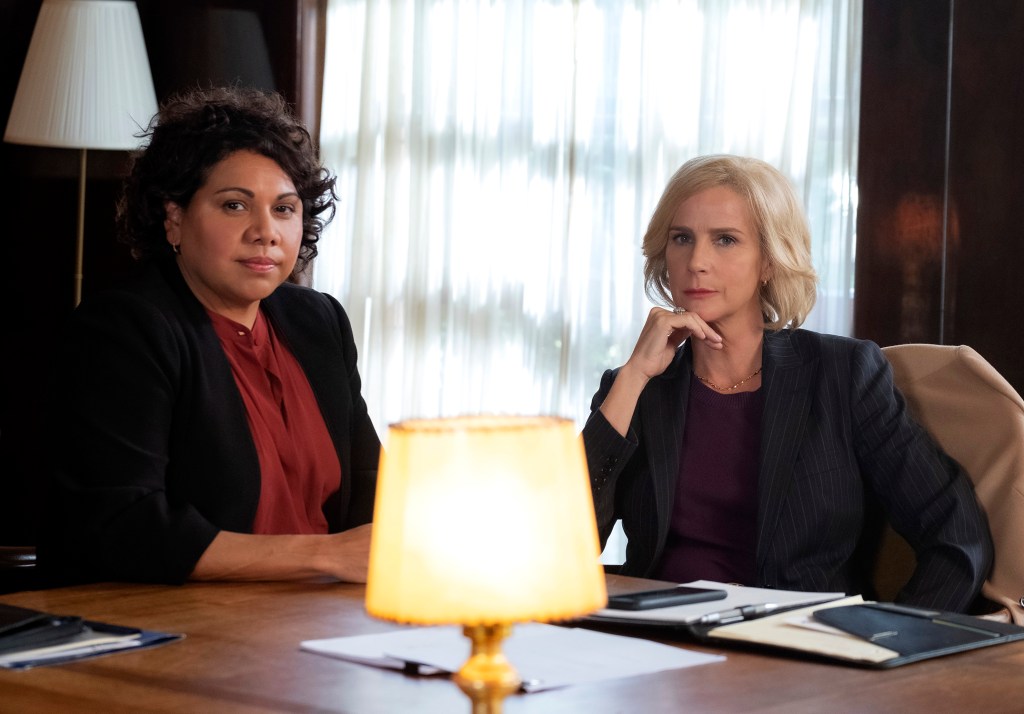 One of the most striking – and infuriating – things about season one of Total Control was the way newly minted Coalition Senator for Queensland Alex Irving (Deborah Mailman) was so bad at playing politics. Instead, she brought to Canberra an aggressive insistence on moral clarity that her colleagues, particularly Prime Minister Rachel Anderson (Rachel Griffiths), found naïve and foolish.

As the second season begins, Alex has ended Rachel’s prime ministership after revealing the government had covered up the killing of an Aboriginal girl in a juvenile justice centre. Having then quit the Coalition, Alex is courted by self-satisfied Labor Opposition Leader Laurie Martin (William McInnes), whose factional warlord Paul Murphy (Wayne Blair, who also directs this season) is quietly manoeuvring to become Australia’s first Indigenous prime minister.

But Alex bridles at the idea of being ‘owned’ by Laurie: parachuted into a Western Sydney seat where she knows nobody, forced to toe an equally odious party line, and becoming a despised stranger in her own rural hometown of Winton. So she decides she’ll run as an independent in her home seat of Freeman against the complacent Coalition incumbent, Jack Ramsay (Colin Friels), and convinces her leftie political-science academic brother Charlie (Rob Collins) to manage her campaign.

Meanwhile in North Sydney, Rachel’s refused to retire diplomatically and has been disendorsed by her former immigration minister, right-wing populist Damian Bauer (Anthony Hayes). Like Alex, Rachel has decided to run as an independent – in her case, as a reasonable centrist, backed by Machiavellian think-tank operator Nick Pearce (Alex Dimitriades).

And when she makes friendly girlboss overtures to Alex, saying they could both potentially hold the balance of power and so need to work together, Rachel is shocked when Alex harshly rebuffs her. That’s the central tension in Total Control: to Rachel, politics is a pragmatic profession; but to Alex, it’s always been personal.

The political-thriller genre flourishes in Total Control always felt a little perfunctory to me – another reason why I didn’t really enjoy the first season of the show. This season amps up the threats to her personal safety: a Twitter stalker is sending her menacing WhatsApps; and a ute with a shadowy hi-vis figure behind the wheel is terrorising her teenage son Eddie (Wesley Patten). Then someone anonymously reports her to child services – a fraught reminder that the Stolen Generations continue to this day.

Predictably, the calls are coming from someone she knows; and when Alex finally unmasks her stalker, she realises anew that genuine compassion and conviction in politics are as rare as Scott Morrison telling the truth.

The show also relaxes into a satisfying ‘campaign trail’ genre as Charlie brings in a crack team of young data nerd Leo Jacobs (Harry Greenwood) and plain-spoken comms specialist Joely McKinnon (Steph Tisdell). Ever the idealist, Charlie insists on a ‘clean campaign’… but everyone else is playing extremely dirty.

The spiky dynamic between Joely and Alex is at the heart of why I’m enjoying season two of Total Control much more. Alex initially encounters a combative Joely at a Winton town-hall meeting and dismisses her as just a disgruntled local barmaid. Later, she learns Joely knows her stuff – and it’s a lesson for Alex that she, who resents being chronically underestimated, can also underestimate others.

Season one leaned heavily on Alex’s ability to unsettle a white-dominated political system by refusing to be pleasant – that trope of the ‘Angry Blak Woman’. And Alex’s actions often came off as improvised bravado – she’d naively expected her colleagues and her staffers would have her back, then was forced to take action herself.

But this season, much of the drama comes from Alex’s recognition that she can’t, and shouldn’t, do politics on her own. So Total Control extends beyond the usual political-thriller question of ‘who you can trust’ to examine how you prove yourself trustworthy, exploring the idea that trust resides in solidarity, not realpolitik.

the strength of this season is its pervasive atmosphere of anger at Federal-politics-as-usual. It chooses to emphasise actual voters, who usually don’t feature much in TV dramas about politics

Indeed, the strength of this season is its pervasive atmosphere of anger at Federal-politics-as-usual. It chooses to emphasise actual voters, who usually don’t feature much in TV dramas about politics: there are a lot of compelling, gritty cameos from people who don’t perform like actors. Rather than mere consumers of ‘civic entertainment’, they become citizens whose voices need to reverberate in Parliament.

Read: From Black B*tch to Total Control: an interview with Darren Dale

The scene where Alex and Rachel appear together on Q&A – a disgusting exercise in empty civic theatre that I have long argued is the worst show on Australian television – is beautifully handled. Blair shoots the grandstanding as Alex sees and feels it. The slick, sinister way the show cuts in audience reaction shots contrasts with the more naturalistic way Blair handles similar scenes. We see that Rachel is at home here, while Alex just wants to get home.

In another key scene, Alex tries to prove her influence to the barflies at the Winton pub by putting Prime Minister Bauer himself on speakerphone, so they can force him to hear their demands. But the experienced Bauer swiftly flips into blokey waffle about ‘have a Fourex for me’, waxing sympathetic about the ‘bloody bugger of a drought’ and charming the pub customers.

‘You stupid bastards,’ Alex says acidly. They had a direct line to the PM, and they rolled over and let him tickle them. But by participating in this ugly system that’s lost sight of its imperative to serve ordinary people, can Alex ever be true to the moral standards she feels so keenly?

‘Total control’ is a concern that reverberates through Australian society generally: have we handed over our power to the most venal, self-interested trough hogs politics can groom? And if so, how do we get it back?

Total Control is on ABC TV and ABC iView on Sundays at 8:40pm.