Nakkiah Lui and Gabriel Dowrick's ABC comedy series is fully committed to its satirical targets, and it made Mel Campbell laugh.
Mel Campbell 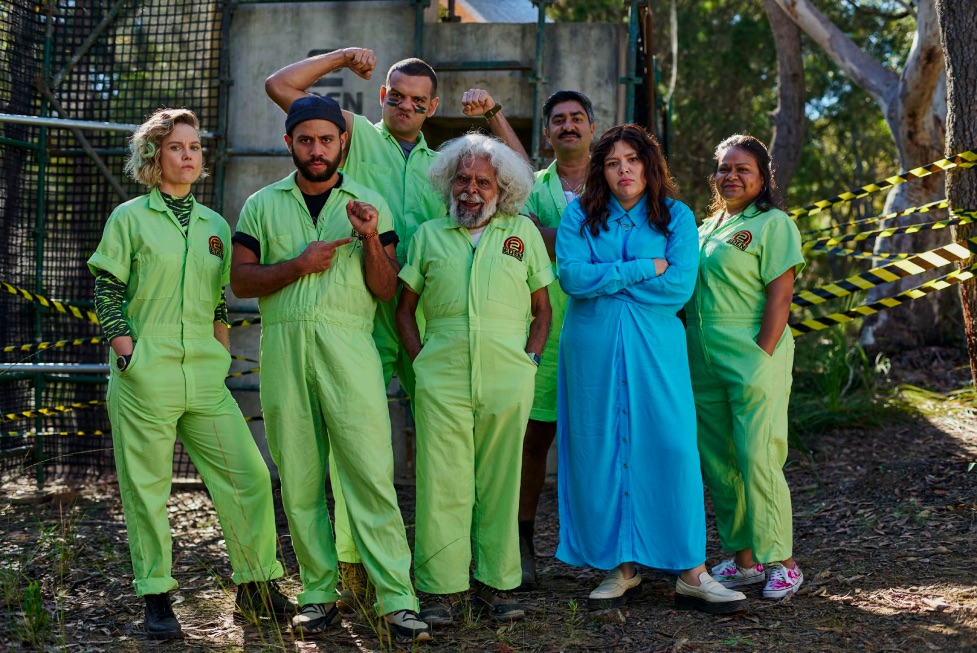 The cast of Preppers, via ABC.

We first see Charlie fleeing through the bush. Then she wakes up on what she thought was her grandmother’s land, only to learn it’s now ‘Eden 2’, where an assortment of doomsday preppers are led by a wily old man named Monty (the delightfully impish Jack Charles), who claims to have been close to Charlie’s Nan (played in flashback by Miranda Tapsell). Monty calmly informs Charlie he has signed a 10,000-year lease on the property.

‘I just want my land back!’ Charlie says.

‘We’re Aboriginal people – we all want our land back,’ says Monty.

Preppers has a satisfying premise: that having survived the crisis of colonisation, Aboriginal people are well placed to cope with any future catastrophe. But not all the Eden 2 preppers are Aboriginal – as Monty explains, the others are there to help pay the rent.

The first Eden 2 preppers Charlie meets are Guy (Meyne Wyatt) – a surly survivalist and self-styled Aboriginal tough man – and Fig (Luke Arnold), an enthusiastic white himbo who just wants to be accepted. Then there are Kirby (Eryn Jean Norvill), the secretive white host of conspiracy-theory podcast Agent of Truth, and Jayden (Aaron McGrath), an earnest, relentlessly political youngster who can’t wait for an apocalypse to usher in Aboriginal self-determination. And Kelly and Lionel (Ursula Yovich and Chum Ehelepola) are a mixed-race couple of reformed swingers who found Jesus and are now saving themselves for marriage or the rapture – whichever comes first.

But what has made pampered city girl Charlie run away from her life? While everyone else at Eden 2 lives in a state of readiness, Charlie’s in the throes of a personal doomsday she barely saw coming.

She co-presents a breakfast TV show deliciously called Wake Up Australia, and is engaged to her smarmy white producer, Thomas (Grant Denyer), who constantly sidelines her in favour of her white co-host Sophie (Brooke Satchwell). But when Charlie pitches an on-air Invasion Day editorial, Thomas talks her out of it – isn’t Charlie’s mere onscreen presence enough of a political statement? Why not let Sophie ‘be an ally’? When Charlie is prodded into participating in a gimmicky Australia Day outside broadcast, and comes to suspect Thomas is cheating on her with Sophie, she snaps on live TV – and her rage goes viral.

Some of the best moments in Preppers are at the expense of the casually racist Australian TV industry – and Denyer and Satchwell are clearly enjoying this chance to subvert their familiar onscreen personas. Satchwell’s white-teary appeals to Charlie’s feminist solidarity are a particular highlight.

The supporting characters are broadly drawn, especially in Episode 1 when their shtick hasn’t yet been well established and so they mainly seem annoying. But they offer Lui and her co-writer Gabriel Dowrick some fun opportunities to satirise sanctimony on many fronts: race, sex, class, religion, gender, media, conspiracy thinking and wellness hucksterism – even the ideological rigidity of activism.

There’s some slyly hilarious and very dark Frontier Wars humour when the gang kidnaps an ‘Aboriginal Aboriginal archaeologist’ (Luke Carroll) to help identify a skeleton in an unmarked grave. And an absolute series highlight is Kate Miller-Heidke’s guest appearance as the legendary Penrith Panther. But there are also fraught moments when the limitations of Charlie’s soft politics become clear, as when staunch activist Casey (Shari Sebbens) calls her out for her complicity with white supremacy. And in the final episode, an all-white bourgeois prepper community, Shangri-La, offers a ‘treaty’ with Eden 2 that may be yet another land grab.

Read: TV Review: All my Friends are Racist is absurd and self-aware

The series is cleverly structured so that the full scope of Charlie’s January 26 meltdown is revealed gradually, in social-media fragments and flashbacks prompted by her interactions with the preppers, and only reaches its raucous, fiery climax in Episode 6. The persistence of this scandal in the news cycle is what keeps Charlie at Eden 2, where she gradually comes to better terms with her Aboriginality and her hippie mum, Marie (Christine Anu), and finally feels like she’s somewhere she belongs.

However, I was a little hazy about what would be involved in the ‘bounty on her head’ being advertised by a rival network. I mean, are they going to offer Charlie a job, or stalk her with paparazzi… or kill her? Never mind – it’s comedy! Preppers is fully committed to its satirical targets – and most importantly, in an industry where comedy is often just ‘quirky drama’, it frequently made me laugh.