The story behind their latest drama, and the secret recipe for this thriving Indigenous production company.
Rochelle Siemienowicz 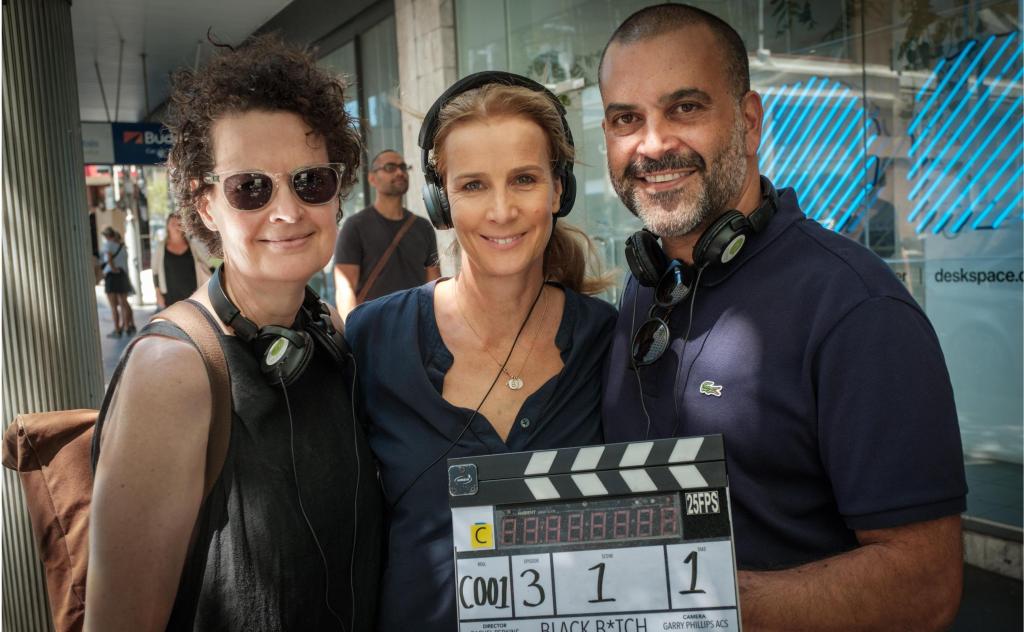 Miranda Dear, Rachel Griffiths and Darren Dale on the set of ‘Total Control’. Courtesy of ABC.

How does an idea get turned into an TV series? Here’s one story.

In July 2017, Darren Dale, the director of the groundbreaking Indigenous production company Blackfella Films (Redfern Now, First Australians) attended the first Australian iteration of Series Mania, the international TV industry event. The hot ticket headline speaker was Vince Gilligan (Breaking Bad, Better Call Saul) and at a dinner after the show, Dale got talking with Rachel Griffiths, the Emmy and Golden Globe award-winning actor, producer and director (Six Feet Under, Muriel’s Wedding, Ride Like a Girl). Griffiths said she had an idea that had been percolating for years, a show called Black Bitch that would be perfect for Blackfella Films.

Speaking on the phone to Screenhub, Dale talks a mile a minute as he remembers the conversation. ‘She said it was about an Indigenous outsider, someone who is helicoptered into politics and then brings the government down. I said that sounded incredible, because we had also been developing an idea for a drama set in politics, but ours was set in state politics. Of course, as soon as Rachel Griffiths was pitching this idea, I got firmly in my mind that she’d make an amazing Prime Minister. It just sounded like a great marriage of two ideas that could merge together and become something neither of us had thought of. We wanted to create drama inside the political space, and also to work with great actors.’

Two years down the track, that show is now a six-part drama called Total Control premiering on the ABC and iView on Sunday 13th October. All six episodes are directed by Rachel Perkins, the founder of Blackfella Films, and Dale’s business partner since she brought him into the business in 2001. Dale is credited as producer alongside Miranda Dear, former ABC Head of Drama, who came into Blackfella in 2010 to help develop their drama slate. Rachel Griffiths is co-creator and Executive Producer. The show was made with major production investment from Screen Australia in association with the ABC, and had support from Create NSW, Screen Queensland and Screen Canberra. And yes, that is the real Parliament House you’ll see on screen, as well as the interiors of the old Parliament House, both of which allowed filming, which seems extraordinary (and heart-warming) in these paranoid times.

Total Control begins with a bang, quite literally, with a scene featuring Deborah Mailman standing up to a gunman. She’s electric in the lead role of Alex Irving, an outspoken and complicated Indigenous woman reluctantly fast-tracked into politics. Quickly betrayed, she embarks on a mission to settle the score. Rachel Griffiths plays the conservative female PM (fond of blue jeans and an Akubra hat), a tough female leader looking for a media-friendly ally. Needless to say, she gets more than she bargained for with Alex.

Dale says that despite his early thoughts of Griffiths making an excellent PM, this was not part of the initial discussions, and Griffiths ‘did not envision herself in that role. We hadn’t even resolved that the PM would be female, but once we started developing the story it felt like really great natural fertile territory for our drama to have two powerful women playing against each other.’

Mailman was also attached early on, leaping at the chance to play her first lead role in a TV series, directed no less by Rachel Perkins, who helmed Radiance back in 1998, a beautiful breakout first feature film for both Perkins and Mailman.

Blackfella took the early idea to the ABC’s Head of Scripted, Sally Riley, whose response was instant. ‘She said, “that’s something I want to watch, and something I want to make,” Dale says.  ‘Deb Mailman was a big draw-card for her because she’s always wanted to have a project centred around Deb, and I think we all know why: because she’s such an extraordinary actor with a great emotional range, an ability to get empathy from the audience and an innate likeability.’

The story producer was Stuart Page (Cleverman, Wentworth, Crownies) with the writing team including Pip Karmel and Angela Betzien. Dale says Rachel Perkins also did some writing, and that he, Miranda Dear and Rachel Griffiths were all there in early story sessions.

Much of the commentary around this show has focused on its name change from the striking and potentially offensive Black Bitch to the rather generic Total Control.

Dale agrees that the original name was a strong one. In fact, he says, Griffiths said the reason she was pitching it to hime was because ‘Blackfella was the only production company who could get away with a title like that.’ But not even Blackfella could pull it off, even with explanation that it was a gutsy reclamation of a racist, sexist slur. There was a Twitter backlash around the time of the Toronto Film Festival preview of the first two episodes, but Dale says the decision by the ABC to rename the show had actually been made before that.

‘Look, Black Bitch was always an aspirational title for us. It was to liberate us tonally and make sure we weren’t just worthy or ploddy or domestic kitchen sinky. But we always imagined it as a working title, and even the ABC announced it as a working title at their Upfronts last year. I know it’s been reported that after a backlash the title was changed, but the title decision was made prior to that. It was just coincidental that the trailer for TIFF dropped because they couldn’t accommodate the title change because their program obviously goes to print much earlier than they announce their program.’

Dale says that the ABC made the decision to rename because they ‘loved the program and the strength of the material, and how engaging the performances were, and didn’t want anything to stand in the way of achieving the broadest possible audience.’

An enterprise tied to the remit of public broadcasting?

Perkins founded Blackfella Films in 1992 but the business really started to make its name in the 2000s, with projects like the acclaimed 7-part documentary history series First Australians (2008) for SBS, and two multi award-winning seasons of the ABC drama Redfern Now (2012-13). Dale was formerly a producer at SBS, Miranda Dear came from the ABC, and the public broadcasters are still the main outlet for Blackfella’s offerings, including factual shows like Filthy Rich & Homeless, How ‘Mad’ are You? and DNA Nation (all SBS). The company’s projects fit neatly with progressive agendas around diversity, gender equity and the support of Indigenous storytelling.

This begs the question: With the current funding crises of the public broadcasters, does Blackfella have a contingency plan? Dale says no, ‘Not an articulated one. I think what we have is a clear idea and mandate of the programs that we want to make. Certainly I think that aligns with the public broadcasters and the kind of content they want to make, mostly projects with Indigenous characters or themes, and with a purpose at their centre. We’ve been very fortunate to work with both of them for many years.’

Obviously he’s hoping the broadcasters can hang in there, but he says that he’s confident that bold Australian storytelling can travel well into the world.Total Control will perhaps be an example. ‘We have quite a substantial investment from Keshet who are the international distributor. They put in a really significant amount of the budget, similar to the ABC, and obviously they’ll be taking it to the MIPCOMs next month and we’ll be hoping for some major sales from that. Buyers are very interested since the screening in Toronto.’

The Secret Sauce – not too many cooks

With critical acclaim, significant audience numbers (for example 2.3 million for First Australians) and an increasing slate of content (five shows in production, according to Dale, across scripted and non scripted), what’s the secret sauce that has allowed this company to grow and thrive?

‘The biggest thing we do is that all the projects we work on, we develop from the ground up,’ he says. ‘We are in there right at the start. We never just come on board as the producer of a project. The ideas are always developed by us from the very inception and that means they’re projects that we deeply care about, that have a purpose and we have our hands all over the content from the very beginning to the very end.’

‘The ideas are always developed by us from the very inception and that means they’re projects that we deeply care about, that have a purpose and we have our hands all over the content from the very beginning to the very end.’

He says maintaining a small size is one of the keys to Blackfella remaining a viable commercial enterprise, and one of the few independent Australian production companies that are still independent. There are just seven people listed as staff of the company. Besides Perkins, Dale and Dear, they are Jacob Hickey (Head of Factual), Helen Lovelock (Business Affairs Manager), Celia Richards (Drama Development and Production Exec) and Hannah Williams (Office Manager).

‘We are viable, and we have been for some time now,’ says Dale. ‘At this size we don’t have to make projects just to service an overhead. We don’t want to grow into a company that has over 30 people. We’ve hit that nice spot where we are making projects that service the desires of the creators.’