Two eps into the ABC’s six-part series Total Control, Chris Boyd’s advice is not to give up before the end of the first one. The dividends come late, but they’re handsome.
Chris Boyd 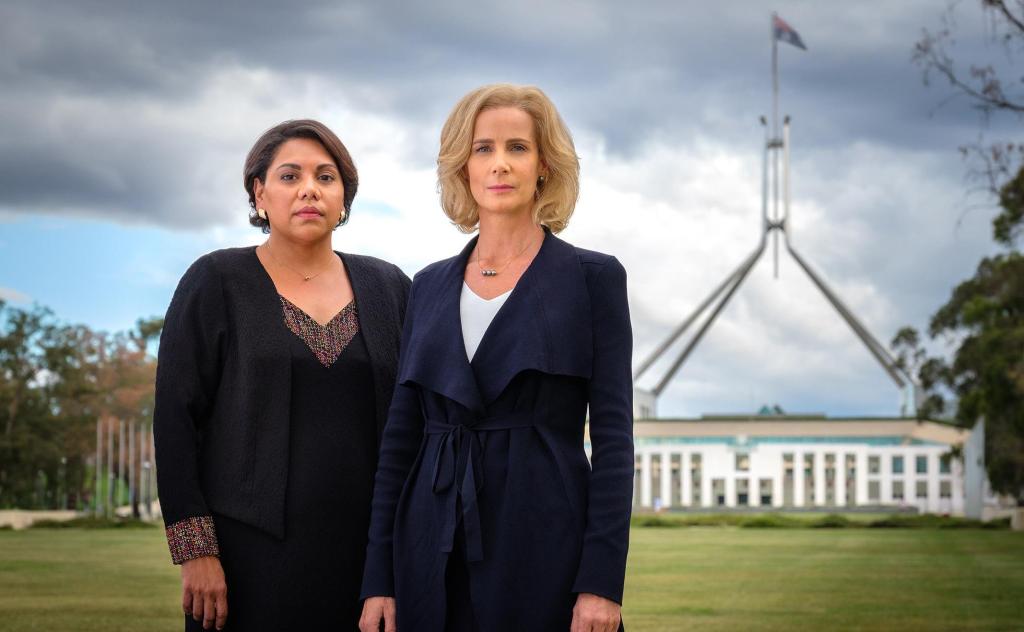 Deborah Mailman and Rachel Griffiths in ‘Total Control’. Image courtesy of the ABC.

A bit of a curate’s egg this one. As an action drama, Total Control is unconvincing and poorly executed. As a political thriller, it’s sketchy and forced. The Canberra intrigue is shallow to the point of parody. Given that the actor’s art is ultimately one of convincing deception, you might imagine that playing a politician would be a comfortable fit. But the senior ministers in Total Control are transparent in their dissembling, as if the actors needed to signal to the camera that they’re lying. (Surely, to rise out of the backbench ranks, one has to be good at lying. Or be barefaced and snake-like when saying the most appalling things.)

I’m not referring to the cat-herding Prime Minister Rachel Anderson (Rachel Griffiths) here. She clutches the poison chalice of leadership – with a parliamentary majority of one – with a tight-lipped grace. She’s too busy dealing with actual problems (principally the Americans, hell bent on bludgeoning Australia into siding with them against China) to worry about the sound of blade sharpening behind her.

Seven months out from the next Federal election, one of Anderson’s Queensland senators has died, costing her conservative government its upper house majority. The PM recruits an indigenous woman from Winton, Alex Irving (Deborah Mailman), to fill the casual vacancy. Irving has caught the nation’s imagination after standing up to a shotgun-wielding man about to shoot his estranged wife. Phone footage of the stand-off has turned Irving into a reluctant – and largely silent – folk hero.

The PM persuades Irving that her hopes for her moribund local community – a reopened health centre tops a long and pricey list – can only be realised if she were to take a “seat at the table.”

Irving’s first meeting with her parliamentary colleagues shows the best and worst of the series so far. The opening shots of the seated and suited male politicians are low and tightly framed, with the shallow focus and compression of a telephoto lens. Casting is perfect: stuff-shirts, preening egotists, dissolute old-timers, showboaters and allowance rorters. Great cinematography, great editing, great extras. Then, alas, they open their mouths. Richard III this ain’t.

Amongst the banality, director Rachel Perkins and writer Stuart Page still manage to convey the anxiety and sheer fraughtness of a woman leading an overwhelmingly male caucus, like a teacher in a boys’ secondary school who is only ever one careless remark away from utter humiliation. It’s a revealing moment. A Margaret Thatcher wouldn’t work in Australia. Nor would a Hillary Clinton. That peculiarly Australian masculine ‘playfulness’ will tear down any woman, no matter how talented or authoritative.

Inconsistencies of craft abound in this first episode. There are some glorious shots, outdoors and indoors. A couple of Parliament House capture Irving’s point of view, her awe and wonder, with easy precision. Others are lazy, washed out and have an ugly (fluorescent) colour temperature.

While Irving’s staff and colleagues are nothing but fatuous veneer, her family are complex, fleshy and brilliantly realised. We don’t question for a second that Irving is a conservative.

As it happens, Alex is the progeny of a staunch royalist mum (Trisha Morton-Thomas, Aunty Mona in Redfern Now) and a card-carrying Country Party dad. The real question is how “latte-sipping Socialist brother” Charlie (a suave and charismatic Rob Collins, Cleverman) fell so “far from the tree”. [Their cliches, not mine.]

Once Irving slips the political shackles and kicks off her high heels – on morning TV opposite Rhys Muldoon – the Deb Mailman we know and love kicks in. More than kicks in. She kicks arse. And that’s where the series belatedly lights up.

Alex is galvanised by the death in custody of a teenage indigenous girl, Marcie Maclean (Val Weldon). Marcie has died of an asthma attack… triggered by tear gas in her cell. And there’s an escapee from the same detention centre (Shantae Barnes-Cowan, remember that name, she is a first magnitude star in the making) who has footage of the girl’s tortured final minutes.

In the second episode, the Senator returns home in an attempt to persuade the traditional owners of the land around Winton to lease it back so that a new US army base can be established.

Increasingly blunt, and foul-mouthed, Mailman is electrifying. Tectonic. Unforgettable. She and Rob Collins, though not the series, are unmissable.