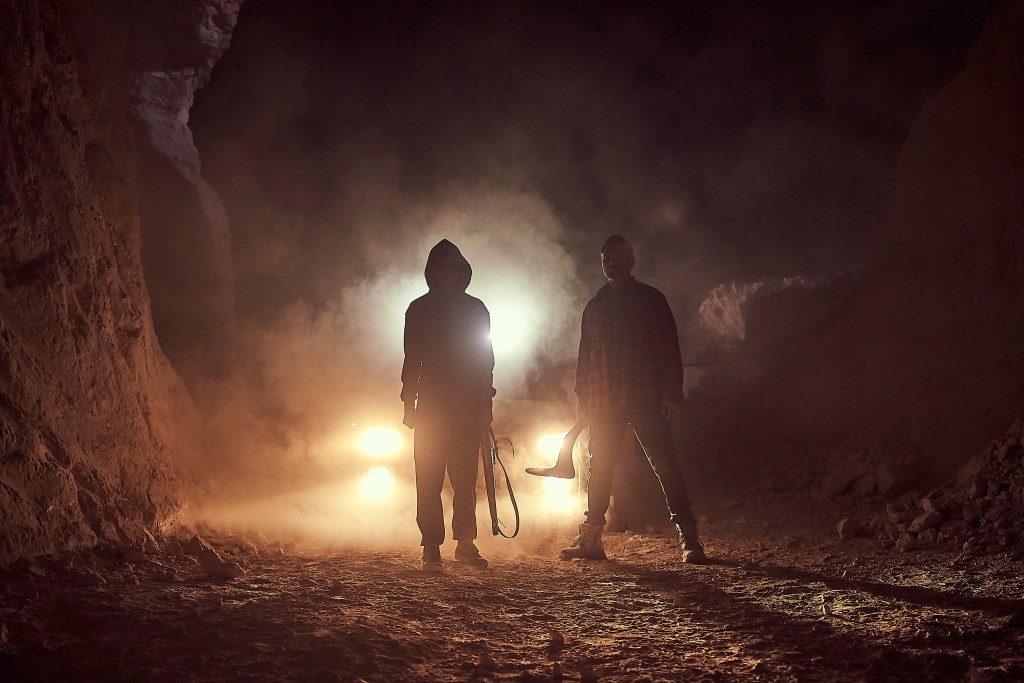 In promoting her recent ABC survivalist-colony comedy Preppers, series co-creator and star Nakkiah
Lui astutely pointed out that Australia’s first peoples had had plenty of practice readying for the end
of things: ‘1788 was like the apocalypse for Aboriginal people,’ she told the Sydney Morning Herald.
Stark and saddening real-world connotations aside, it’s a line of thinking that’s ripe with dramatic
possibilities and potential, and the new eight-episode homegrown horror series Firebite rips into it
with bloody elan.

Created by Warwick Thornton and Brendan Fletcher, collaborators on the terrific documentary We
Don’t Need a Map, it’s a gutsy, vibrant and enjoyable piece of pulp fiction with an undercurrent of
rude, angry energy coursing through it, appropriate enough given its inspiration.

Read: Warwick Thornton’s big time out at The Beach

Thornton’s discovery a few years ago that among the cargo transported to Australia by the First
Fleet was 11 vials of the smallpox virus – whether they were brought along for vaccination purposes
or viral weaponry is still debated – prompted the acclaimed Samson and Delilah filmmaker to
transfigure the deadly disease that ravaged the Indigenous population into something equally lethal
but perhaps a tad more cinematic: vampires.

Firebite’s backstory has 11 vampires shipped out to Australia two and a half centuries ago by the
white powers that be with the sole intention of wiping out the Black inhabitants of the land. Of
course, the vamps didn’t count on Indigenous ‘Blood Hunters’, skilled warriors who gradually
whittled down the invaders’ numbers over the years.

Now only one original vampire remains – Josiah, the Vampire King (Callan Mulvey) – and he’s
travelled to the outback mining outpost of Opal City to marshal his remaining bloodsucking troops,
who lurk in the labyrinth of tunnels and mineshafts below the ochre sands, and replenish his
numbers in a last effort to conquer the country.

Standing in their way? Cocky, boozy vampire hunter Tyson (Rob Collins) and his fiery adopted 17-
year-old daughter Shanika (Shantae Barnes-Cowan), who have done a pretty good job so far of keeping
the region’s few rogue vamps at bay. But the arrival of Josiah ups the stakes (sorry), and it’s going to
take more than the two of them to quell this terrible threat.

Three episodes of Firebite were made available for review, and they strike me as sufficient to
evaluate its virtues and flaws, the former of which far outweigh the latter. The series is a co-
production with US network AMC, responsible for the likes of The Walking Dead and Breaking Bad,
and while the injection of a little international capital ramps up the production value somewhat, it’s
clear that this is an Australian story – and a First Australians story – through and through.

There are times when Firebite seems so hellbent on putting the pedal to the metal that the plotting
ignores or creates a few holes for itself, although the show’s energy is so punchy and captivating that
those holes are papered over well enough. And I must admit I found some of the dialogue on the
clunky, expositional side, although a vampire hissing something like ‘The last Blood Hunter…’ to
themselves as they stare into the distance really is de rigueur in a yarn like this.

But Thornton (the show’s cinematographer, and director of four of the eight episodes) and his
collaborators do a great job of dovetailing between tones and moods of ratbag humour, righteous
fury (‘they sent them everywhere,’ a vampire hunter says of his prey, ‘every colonised nation is at
war’), heightened action and genuine dread, all the while imbuing Firebite with tributes and
homages to vampire stories of the past – one suspects Robert Rodriguez’s From Dusk Till Dawn and
Kathryn Bigelow’s Near Dark were screened for the cast and crew – and classic Aussie genre fare.

The casting is excellent. Mulvey’s sleek, predatory beauty and unnervingly calm affect are a great fit
for Josiah, and while she has not a lot to do in the early episodes, one can only assume that a
production doesn’t secure the services of the gifted Yael Stone only to have her doling out beers and
sassy one-liners behind the Opal City bar, so keep an eye on her character of Eleona.

The stars, however, are Barnes-Cowan and especially Collins. Barnes-Cowan made a forceful
impression in the first season of the ABC political drama Total Control, and here reinforces that she’s
someone to watch – Shanika takes no shit from vampires, racist schoolmates or her larrikin dad
Tyson, and the young actor’s performance is full of conviction and charisma.

And if there’s any justice, Firebite should immediately kick the incipient stardom of Cleverman, Total Control and
Mystery Road’s Collins up a few notches. Tyson is a juicy role, complete with action-man heroics,
self-deprecating humour and dark moments of the soul, and Collins doesn’t put a foot wrong
depicting any of it. ‘I’m a rock star,’ he smirks after singlehandedly dispatching a posse of vamps. He
ain’t wrong.