We are clearly watching Anne’s own telling of her story: her own fantasy of being a playful, adorkable rom-com heroine.
Mel Campbell 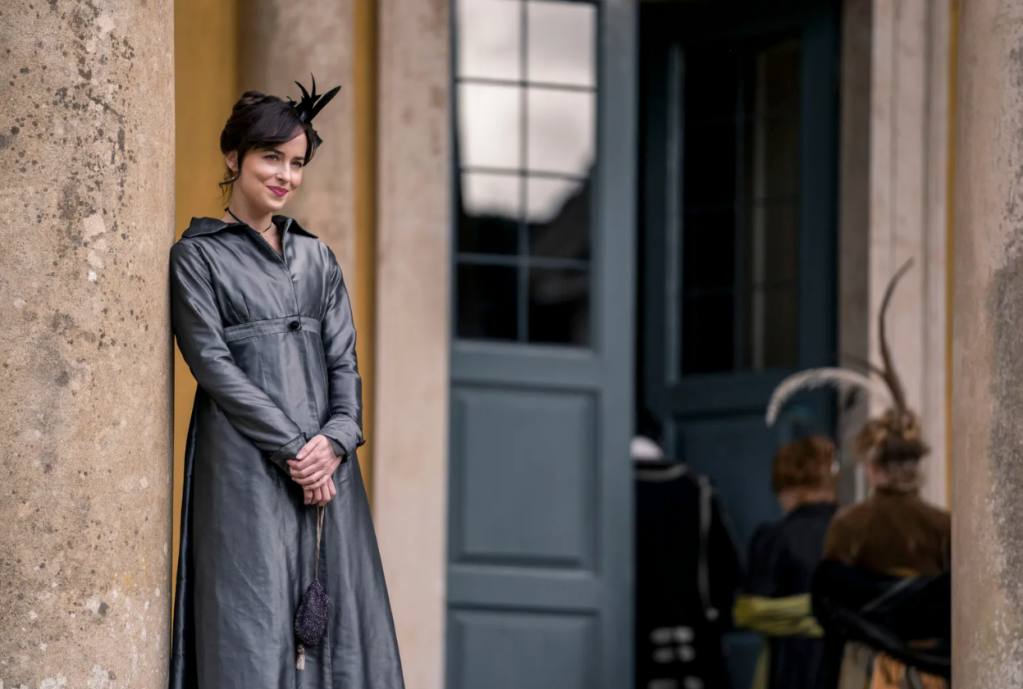 While I want to be clear from the start that this is a frustratingly bad adaptation of Jane Austen’s final completed novel, it isn’t an entirely bad film.

Indeed, I was surprised by the fresh, wistful tone the film sets up at its outset. Persuasion is a fundamentally melancholy story about Anne Elliot (Dakota Johnson), a woman who was once persuaded to give up her great love, and now can’t see anything good in her future.

Anne is the middle daughter of an immensely vain and status-obsessed baronet (Richard E. Grant). Her dead mother’s best friend, the well-meaning but completely foolish Lady Russell (Nikki Amuka-Bird), was the one who persuaded Anne to dump her soulmate, naval officer Frederick Wentworth (Cosmo Jarvis), because his prospects weren’t deemed good enough.

Of course, now he’s back, promoted to captain and enriched by the Napoleonic Wars, while Anne’s spendthrift dad has forced the family to decamp to Bath, a snobby resort town she hates.

So it’s a smart creative choice to begin with a dreamy flashback to what Anne has lost. As the film begins, she’s canoodling with Wentworth, then the film then cuts to Anne in the first of many fourth-wall-breaking addresses to camera. Johnson’s delivery is elegiac: as she strokes her pet bunny, she has the rueful quality of someone who’s speaking to us because no human in her life understands her. Only Wentworth did, and now he’s gone.

Read: Of the Persuasion: Why Austen will be remixed to eternity

This establishes an intriguing context for all the things I hated about the film’s aggressively zany trailer – all that 1990s rom-com klutz business, and that Fleabaggish self-loathing. Anne slips over in a puddle of what could be her own urine, upends a full gravy boat into her hair, blurts out embarrassing revelations at a dinner party, and is caught by Wentworth doing a silly pantomime impression of him for her young nephews, complete with bread-basket hat and jam moustache.

But we are clearly watching Anne’s own telling of her story: her own fantasy of being a playful, adorkable rom-com heroine. This fantasy is the only thing sustaining her. When her appalling, narcissistic family members say or do something thoughtlessly awful, she always glances compulsively at the camera, as if to say: see what I have to deal with here?

I also wonder if the irritating ahistoricity of Anne’s appearance – she looks like a 2020s Instagram influencer with her curtain bangs and beret – was a deliberate creative choice. What if this is also Anne’s fantasy of not being like other girls?

What if she is compensating for her lost ‘youthful bloom’ – she learns, crushingly, that Wentworth now finds her appearance ‘much altered’ – and her family’s humiliatingly reduced financial circumstances by imagining herself to be someone special and emotionally authentic in a world of phonies?

A lack of control?

The fact we can’t really be sure about this film’s creative intentions suggests that the creators weren’t truly in control of this adaptation.

But a telling scene comes maybe halfway through the film, when Anne believes she has finally lost Wentworth for good. She tells us that she had often morbidly imagined how she would face this moment. She self-mockingly says she’d wished for such grace and dignity that statues would be erected to her heroism.

In another revealing scene, Anne is out walking with Wentworth, her hypochondriac sister Mary (Mia McKenna-Bruce), brother-in-law Charles Musgrove (Ben Bailey) and his two eligible young sisters Louisa (Nia Towle) and Henrietta (Izuka Hoyle). Anne is about to pee behind a tree when she overhears Wentworth observing disparagingly to Louisa how much he dislikes that Anne always sits on the periphery, quietly judging everyone.

This is a real departure from the way the scene is written in the novel, where Anne does not hear anything explicitly bad about herself, but recognises that Wentworth is still wounded by the way Anne had allowed her mind to be changed about their engagement.

The Anne of the novel is an unfailingly kind, capable person who always listens sympathetically to everyone, and selflessly does her best to help others. But in this moment, in this film, Anne is forced to consider that others might see her as cold and judgemental – that the loveable klutz we’ve been watching up to this point is Anne’s self-delusion.

The idea that the film does not actually like its heroine is the most interesting thing about this adaptation.

Anne is Austen’s most interior heroine, which makes her a difficult prospect to bring to the pure surface of the screen. But ultimately, the film’s other creative choices left me annoyed, wondering if screenwriters Ron Bass and Alice Victoria Winslow even cared about the themes and values of Austen’s novel.

In retrospect, the aggressively zany trailer feels like it was meant to lure fans of something like Bridgerton – a recent novel series by a still-living author, written explicitly to pander to contemporary romance-genre tropes that assume individuals are free agents motivated primarily by the pursuit of their own happiness.

Persuasion, by contrast, is set in the same time and place it was written: among the landed gentry in early-19th-century rural England, where social circles were small, rank and reputation were finely calibrated, and individuals were treated as appendages of their families.

In this world, a 27-year-old single woman like Anne was not a young person with future hopes and plans. Life was basically over for her! She was condemned to live like a ghost: faded, forgotten, ignored, and utterly dependent on the goodwill of others. There was no such thing as “exes” in Regency England – which is exactly why Anne and Wentworth spend most of the story struggling to understand what they now mean to each other!

I don’t want to come across as one of those period-drama pedants who get mad about horrible modern dialogue clangers like ‘a six in London is like a ten in Bath’, or ‘We’re worse than strangers. We’re exes.’ Deliberate anachronism has worked well in shows such as Our Flag Means Death, Dickinson and The Great, where it flags a satirical intention: the historical revisionism is meant to commentate on contemporary society.

By contrast, a successful literary adaptation can use modern ideas to enrich the original story. Taking Jane Austen’s works alone, Clueless is a wonderful adaptation of Emma, while Bridget Jones’s Diary is a delightful Pride and Prejudice commentary.

Read: The Umbrella Academy is a masterclass in adaptation

Before watching Persuasion, I watched Fire Island on Disney+ – a shrewd and hilarious adaptation of Pride and Prejudice, written by and starring Joel Kim Booster, that tackles all Austen’s themes of family, class mobility and romantic expectations by expressing them through a contemporary lens of Asian-American identity and gay male party culture. Booster gets Austen’s novel – and that’s what makes Fire Island so much fun.

To do Persuasion justice you need to capture Anne’s bitterness. Rather than simply a novel about ‘second chances at love’, it’s a pun on ‘persuasion’ as the act of convincing someone, and as a person’s temperament or inclination.

Anne and Wentworth are twin flames whose hidden emotional depths prevent them from simply coming out and saying, ‘I made a mistake – let’s try again’. Only a cathartic letter from Wentworth to Anne at the film’s climax bursts the tension the story builds up.

But this film just doesn’t have that tension. It doesn’t have the courage to make Anne truly unlikeable; and Jarvis’s Wentworth isn’t mercurial enough to make us worry that Anne might truly miss out on his love a second time.

Persuasion is currently streaming on Netflix. 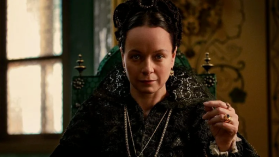