TV Review: The Great is a lavish bureaucratic sitcom 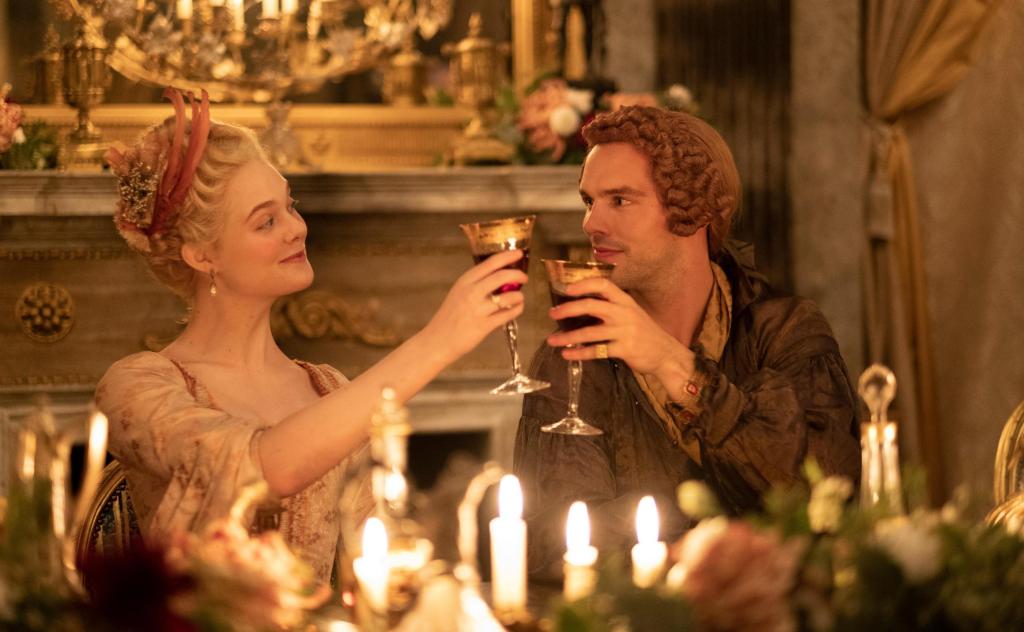 ‘Huzzah!’ Elle Fanning and Nicholas Hoult in The Great. Image via Stan.

Two 18th-century teenagers play picturesquely on a swing, like a vision from a Fragonard painting. One girl comes from a noble but penniless family, yet she’s about to be married – and her friend stops swinging abruptly to hear the bridegroom’s name. ‘Emperor Peter… of Russia?’

‘Yep! Russia,’ says Catherine (Elle Fanning) triumphantly. Glowing and naïve, raised on Western romance and Enlightenment ideas, she’s heading blithely into a farcical, feudal world where almost everyone believes they deserve greatness. Yet we know from history that only Catherine will eventually be called ‘the Great’.

The Great is a ten-episode series created, written and executive-produced by Australian writer-director Tony McNamara, based on his stage play. McNamara was Oscar-nominated for Best Original Screenplay for The Favourite, alongside his co-writer Deborah Davis; and if you loved that film’s satirical fizz and power struggles, you’ll probably love The Great too.

Billing itself as ‘an occasionally true story’, and lavishly art-directed to recreate the opulence of the Imperial Russian court, it treats its historical setting and characters with the same cavalier looseness as The Favourite, and evokes a similar atmosphere of privileged anarchy and emotional cruelty.

When Catherine arrives, she’s shocked by how provincial and casually misogynist the imperial court is, beginning with Emperor Peter (Nicholas Hoult) himself: a callous fool ruled by his appetites. He loves smashing vodka (and then smashing the glass on the floor with a hearty ‘Huzzah!’), hunting for rabbits (badly), and shagging his mistress Georgina Dymov (Charity Wakefield) – who happens to be married to Peter’s long-suffering best friend Grigor (Gwilym Lee, Top End Wedding).

Meanwhile, other palace insiders jostle for power by pandering to Peter and his laddish coterie. The weird, fervent Orthodox Archbishop (Adam Godley) has prophetic visions fuelled by magic mushrooms. Buffoonish military commander Velementov (Douglas Hodge) is forced to wage a futile war with Sweden to bolster Peter’s hunger for greatness. And career bureaucrat Count Orlo (Sacha Dhawan) is wily but wimpy, and constantly belittled by the jocks of Peter’s inner circle.

But in the deserted palace library Catherine meets Orlo, who will become one of her few allies at court, along with Peter’s kooky, libertine Aunt Elizabeth (Belinda Bromelow). After Catherine unwittingly insults the court ladies and humiliates popular Lady Svenska (Danusia Samal), she’s snubbed and smeared with that horse rumour. Her closest confidante is her maidservant Marial (Phoebe Fox), a former aristocrat forced into serfdom because her father insulted Peter.

It’s the resentful Marial who tips off Catherine that if the Emperor dies, the crown passes to the Empress. Catherine begins to plot a new, progressive Russia under her benevolent rule, and recruits Orlo to her scheme. But after Peter gifts Catherine a gentle, well-endowed lover, Leo (Sebastian de Souza), will she lose her appetite for treason?

The Great arrives at a cultural moment when more period dramas are abandoning earnest, stuffy pageants for deliberately anachronistic burlesques. But this isn’t the gleefully trashy anachronism of shows including Spartacus: Blood and Sand, The Tudors, Reign or Black Sails, which pander to contemporary appetites and aesthetics in their soap-opera plotlines, fantasy costuming and graphic sex and violence.

Rather than a soap, The Great is a bureaucratic sitcom in the same comedic tradition as Yes Minister, Blackadder, The Thick of It, Utopia or even The Office. Its characters fall into archetypes, have recognisable roles, and repeatedly create farcical misunderstandings within chaotic events that ‘reset’ after each episode. It’s through comedic repetition that The Great’s social satire and character building express themselves.

As a female-fronted historical comedy, The Great also occupies the same broadly feminist terrain as Kate Beaton’s hilarious Hark! A Vagrant history comics, and the Apple TV+ series Dickinson, which enlivens and queers Emily Dickinson’s life and poetry for a young audience.

But The Great is never too superficial or flippant. Like The Favourite, it undercuts its farce with some surprisingly heavy dramatic moments. Lost in the forest, Orlo confronts his capacity for both cowardice and savagery. Marial sneaks back to her former palace apartments and is savagely beaten for her nostalgia. And in one particularly bleak sequence, Catherine and Elizabeth deliver cheer and macarons to the battlefront and are sickened by their complicity in the soldiers’ suffering.

Despite Fanning’s fresh, always compelling charm, Catherine is not the show’s most interesting character. That would be Peter, who’s both so funny and so pathetic that it would completely ruin The Great if Catherine ever managed to kill him off. Ever since Skins, Hoult has shown a gift for portraying mingled confidence and cruelty; his Peter is clearly a product of his awful parents, whose legacy he feels compelled to preserve – sometimes literally. Lee is also delightful as the cuckolded Grigor.

I had such fun watching The Great, a historical treat that lives up to its title. Both sweet and acerbic, it’s as bingeable as Catherine’s macarons and Peter’s vodka. Huzzah!