Netflix's Persuasion has sparked outrage among Austen fans before it even premieres – why does the author's work still excite us so much?
Meg Funston 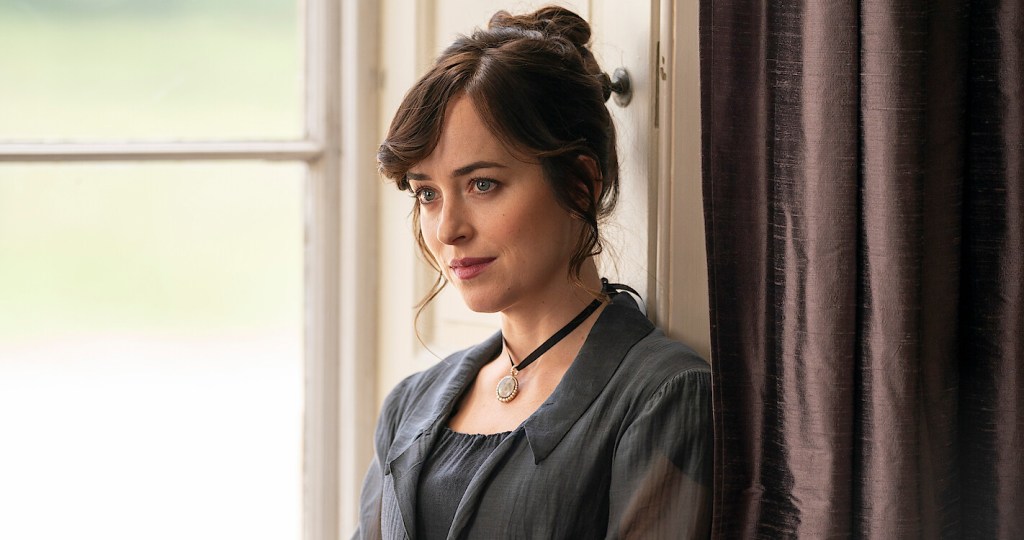 When Persuasion premieres on Netflix on 15 July, it will join the long, long list of Jane Austen adaptations – many, if not all, of which, take liberties. From a bedraggled (and butterfly-inducing) Colin Firth climbing out of a lake in the BBC’s Pride and Prejudice (1995) to teenage rom-com Clueless (1995) – based on the author’s 1815 novel Emma – the value of reinterpreting Austen’s fictional worlds is a truth universally acknowledged. But why – as in the (2016) film Pride and Prejudice and Zombies – do these particular stories and their characters remain … undead?

Netflix’s upcoming Persuasion stars Dakota Johnson as Anne Elliot, the novel’s protagonist, who must choose between ‘the one that got away’ (a man she loved eight years earlier, but was persuaded by her family to reject) and a new suitor. Although the story has been adapted for the screen before, this most recent version – or the trailer for it, at least – has set Janeites the world over on edge.

The trailer sees Johnson’s character adopt a kind of Fleabag-style role, breaking the fourth wall and talking directly to camera, a move Austenites are saying is unfaithful to the original text (which, um, didn’t involve cameras or fourth walls). Set up as something of a quirky millennial rom-com (we see Johnson smear jam on her face, drink wine straight from the bottle, bashfully stumble over her words, and knock a bottle of gravy onto her head) some – many! – have argued, even before it airs, that the filmmakers have misread, or altogether ignored, the source material.

‘I was really, really looking forward to this Persuasion,’ says Harriet Jordan, Vice-President of The Jane Austen Society of Australia. ‘It’s my favourite novel in the world. And when I saw that they were doing consciously diverse casting I was really excited about it.’

‘But then I saw the trailer, and it didn’t feel like the Anne Elliott of the book. They fundamentally changed the main character. My expectations have rather plummeted.’

Jordan, who also co-hosts the podcast Reading Jane Austen, doesn’t doubt the film will have its own fans – and those who will watch it just because. ‘I’m sure it will work for a lot of people,’ she says. ‘I just suspect I’m probably not one of them. It won’t stop me watching’.

Jordan has been a fan of Austen since high school, and been involved with the Jane Austen Society of Australia, the largest literary association in Australia, intermittently since its early days, more than 25 years ago.

‘At the heart of all of the novels, there is a romance that you can really buy into and enjoy,’ she says. ‘There is just this amazing observation of people and you get a real picture of what the society was like then’. While she prefers when screen adaptations keep most of Austen’s dialogue and the books’ sense of humour – ‘they’re funny, like they’re really funny’ – she’s also not ‘one of these people who says you have to be exactly 100% true to the book … because you can’t’.

And of course, if one adaptation doesn’t work, we can all rest assured that another will be along in five or so minutes. As with the monster Netflix hit Bridgerton, there seems to be something about the British Regency era (1811–1820) that keeps us coming back for more.

Scriptwriter and novelist Luke Devenish, whose most recent novel The Heart of the Ritz is set within the iconic Paris hotel during the second world war, thinks that the past – however troubled – offers a certain refuge.

‘An obvious appeal is escapism,’ he says.  ‘I think we look to the past for answers to our current problems, and potentially see a way forward that we might not have envisaged.’

Romance also helps. ‘There’s comfort in these types of stories for people who may currently be feeling lonely, or feeling disconnected or feeling in other ways dissatisfied with relationships. They’re saying to modern readers and modern audiences: if you work on yourself, and do your best to make yourself a better person, love will find you.’

Devenish, a senior lecturer in film and television at the University of Melbourne, has published four historical-fiction novels, supervised more than 1,500 scripts for Neighbours, worked on Home and Away, and as an assistant commissioning editor for drama at the ABC. He’s not one of the naysayers about the upcoming Persuasion adaptation. ‘If the current adaptation is reflecting certain devices, and taking cues from something like Fleabag, I’d say that’s fantastic, and it makes me want to see it.’

‘These texts are the world’s texts, and they are open for everyone and anyone to interpret as they wish. The key to adaptation is that you actually have to not treat the original texts as some kind of sacred cow. That doesn’t further the art form, and doesn’t further the story.’

But what of those die-hard Austen fans who are already expressing dismay?

On this last point, Jordan makes a similar observation – one that seems to confirm what we all already sense (depending on our sensibilities): Jane Austen’s world and ours will continue to interact long after the dust has settled on Persuasion.

‘All the adaptations have their fans,’ she says. ‘Different people like different things’.

Persuasion premieres on Netflix on 15 July.