These were the shows that delivered us from lockdown, with a focus on Australian content but not exclusively. From Mystery Road to Stateless, Aunty Donna, The Great and Bluey these rated highly with our critics.
Rochelle Siemienowicz 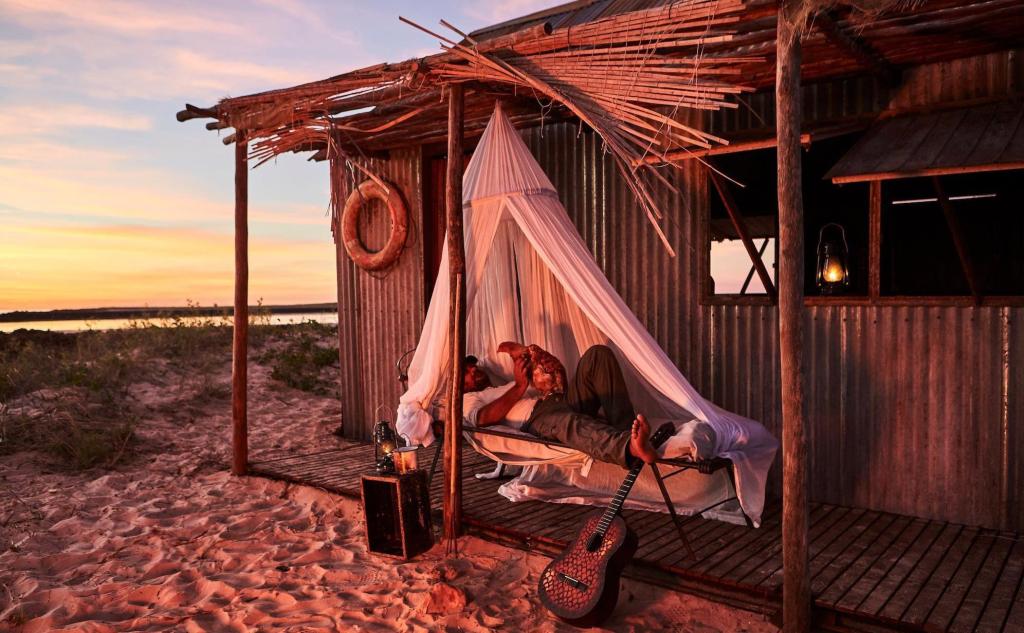 Image: Warwick Thornton’s slow TV special The Beach (SBS) was exactly what we needed in lockdown.

Watching television became hard work for me this year, and I wonder if it was the same for you.

It wasn’t just the three remote controls I had to locate in order to operate my TV; or the lost passwords and expired credit card details for too many streaming services. I was also suffering the lockdown blues.Tied to my computer screen all day, I took refuge in books after hours, or browsed comforting and sensual makeup tutorials on my phone, dipping in and out of the ABC news app for coronavirus updates when I dared.

Watching gruesome crime, hard-hitting documentaries or even tense cook-offs felt too stressful in this weird limbo. Mainly I wanted comedy, or relationship dramas set in the olden days when we used to leave the house; or something visually stunning and geographically transporting.

Something like Warwick Thornton’s gorgeous six-part slow TV documentary event,The Beach (SBS & NITV), which took us up the north west coast of Australia to watch him detoxing on a deserted beach, cooking up a storm in an art-designed man-shack, and talking to his chooks from a hammock. The Beach was without a doubt the best thing I watched all year, and interviewing him about it was also a highlight.

Screenhub reviewer Chris Boyd loved The Beach too, watching it three times and giving it four stars. He called it ‘a blinder. Gorgeous. Fascinating… a deeply personal gift for our solitary times. See it on free-to-air, if you can, on the biggest screen you can find.’

Read: TV review: The Beach is gorgeous but deeply puzzling

Also set in the same part of the world (and featuring Thornton as one of its directors, along with Wayne Blair), Mystery Road Series 2 was thoroughly engaging, full of memorable characters, locations and surprise twists. Detective Jay Swan (Aaron Pederson) is well worth spending time with, even if he’s not a great conversationalist.

The series created by Cate Blanchett, Elise McCredie and Tony Ayres tackled some difficult subject matter, with much of it set in an Australian detention centre where a fistful of characters converge on all sides of a dilemma. In a cast full of standouts, including Blanchett, Yvonne Strahovski gave an amazing performance as a disturbed woman caught up in a cult and then a detention centre. The Matchbox Pictures drama dominated the AACTA Awards this year and our critic Chris Boyd gave it four stars. Praising its cinematography, direction, editing and sound design, he said, ‘…it is the evenness, depth and sheer acting torque of the large ensemble…that will grip you to the very end.’

Read: TV Review: Stateless is gripping to the very end

Nuclear tests were just part of a longer story, as told by Larissa Behrendt’s excellent documentary made as a condition for filming drama series Operation Buffalo. In her 4.5 star review, Mel Campbell said:

Maralinga Tjarutja also gently but provocatively reminds the viewer of a colonial legacy just as toxic and persistent as nuclear contamination: the way that severing ties between people and their Country forces later generations to embark upon journeys home through white bureaucracies and archives, searching for the cultural knowledge that was stolen. No wonder the mystery and the road have been such powerful tropes in Aboriginal storytelling – case in point, Mystery Road.

Ten comedians took their shows to a global audience with this excellent straight up funny series, which Anthony Morris deemed 5 star-worthy, writing:

Anarchic, rude and weird, Australian comedy team Aunty Donna don’t appeal to everyone, but they do appeal to Morris who gave the new show 4.5 stars. Honed on live performance and online, the wacky guys finally got a proper TV show on the biggest platform around and he reckons they just keep getting funnier.

Laurence Billiet’s tender insight into one of our most celebrated sports stars, Cathy Freeman, was joyous and timely, said First Nations critic Bryan Andy in his 4.5 star review of the documentary. Andy particularly liked the addition of Yawuru woman and dancer Lillian Banks, ‘who is choreographed sparingly but brilliantly by Stephen Page of Bangarra Dance Theatre, who doubles as the doco’s co-director’. Banks was used within the one-hour film as a kind of body double representation of the younger Cathy Freeman. Andy also writes that ‘the broad palette of media snippets in Freeman is complemented by reflections from the woman herself, in Cathy’s trademark bubbly-yet-sincere, determined voice. An engaging balance is struck, resulting in renewed appreciation for her focus, determination and tact in trailblazing a track that still, after twenty years, remains legendary and unmatched.

Read: TV Review: Freeman is a portrait of Aboriginal excellence

Oscar-nominated Australian writer-creator Tony McNamara delivers a bingeable historical farce that will delight fans of The Favourite in this whipsmart rollicking comic costume drama, very loosely based on the historical Catherine the Great. It stars Elle Fanning and Nicholas Hoult in career best performances and Mel Campbell absolutely loved this giving it 4.5 stars. She wrote:

Rather than a soap, The Great is a bureaucratic sitcom in the same comedic tradition as Yes Minister, Blackadder, The Thick of It, Utopia or even The Office. Its characters fall into archetypes, have recognisable roles, and repeatedly create farcical misunderstandings within chaotic events that ‘reset’ after each episode. It’s through comedic repetition that The Great’s social satire and character building express themselves…. But The Great is never too superficial or flippant. Like The Favourite, it undercuts its farce with some surprisingly heavy dramatic moments.

Read: TV review: The Great is a lavish bureaucratic sitcom

Ludo Studios’ much awarded animated series about a blue heeler pup and her family is pure fun and ABC iview’s most watched show of all time. No wonder, said Anthony Morris in his 5 star review. The series couldn’t have come at a better time in the hard year that was 2020. He wrote:

Our critics this year gave four star reviews to a number of other shows including:

A few of my personal favourites

In those moments when I managed to find all three remote controls and lose my phone for a minute, these were the shows that gave me hours of distraction, diversion and delight. Maybe they’ll do the same for you over the summer break:

An emotionally satisfying and visually stylish drama about a female chess prodigy in 1960s America.

The latest series covering the Lady Di years is intelligently plotted and totally addictive, chock full of fantastic performances, including Gillian Anderson as Thatcher and Olivia Colman as the Queen.

Tim Minchin and Milly Alcock are sensational as two misfits on a road trip across the Nullabor with an old piano of the back of their ute.

A darkly comic series from 2018 about a stale married couple (Fred Armisen and Maya Rudolph) navigating their relationship in the afterlife.

A pair of jaded aspiring comedians living in New York are almost unbearably nasty, but their saving grace is their staunch friendship and love for each other. This comedy has actual jokes and its very funny, staying just the ride side of sour, and occasionally sweet.

The Pier (SBS on Demand)

A Spanish mystery drama about a wife discovering her husband’s secret life after his apparent suicide. This is sexy, surprising and very delicious to watch, especially if, like me, you’re dreaming of visiting Valencia, or anywhere outside of Australia.