From artist to director, CJ Grebb tells us about his 20+ years in the world of game art.
Edmond Tran 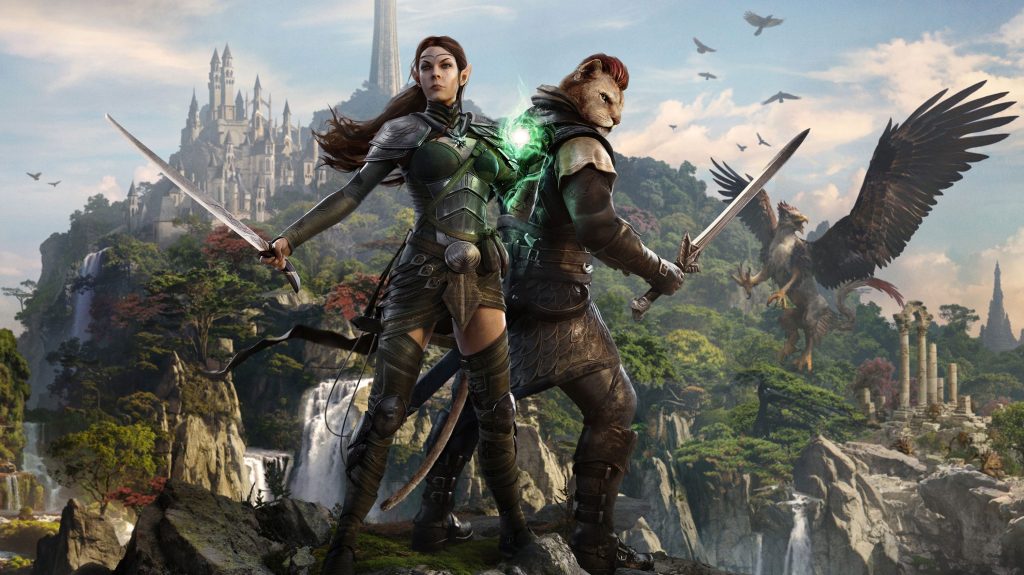 How does a large-scale, massively multiplayer online role-playing game (MMORPG) come together? That’s a question that we can’t really answer in less than 2000 words, but we can get an insight into how some of its head creatives think and work. We recently spoke to Art Director on The Elder Scrolls Online, CJ Grebb, about the burden of building and maintaining a large, established fantasy property. But we also spoke to him more specifically about his leadership role at Zenimax Online Studios, currently staffed by hundreds of employees, and what it’s like to go from a hands-on role as an artist to a management and decision-making role on one of the world’s biggest shared online universes.

[The following interview has been edited for clarity]

ScreenHub: A general question to start: What does the Art Director role on a game like The Elder Scrolls Online actually entail?

CJ Grebb: I basically coordinate and am the ombudsman for all of the art that comes out of artists and eventually gets into the game. So I’m surrounded by a team of really, really supremely talented people, all of them better artists than I am at their individual tasks, but I get to be the person who makes the decisions about what goes in, and what best suits the story, and what best suits the storytelling that we’re trying to do.

What was your pathway to the position that you’re in now?

I graduated with a graphic design degree and thought I was gonna go into magazine layout, newspaper layout, that kind of thing.

I answered – and I swear this is true – a classified ad in The Washington Post. So I moved out to Washington, DC after college for a rinky-dink little game company that wanted an artist.

That company ended up being Mythic Entertainment, which eventually went and made [popular mid-2000’s MMORPG] Dark Age of Camelot. By the time we started working on Dark Age, they had promoted me up to become the Co-Art Director on that project.

I was with Mythic for 17 years after that, which is extremely unusual in the games industry, to stay with a company that long. When I just wanted to make a change, I contacted my old boss Matt Firor, who was now working for Bethesda and making The Elder Scrolls Online, and I let them know I was moving on from Mythic asked if I could put their name on a reference.

And it just so happened they needed a Creative Services Manager. So I was the Creative Services Manager for a while, which was creating videos and screenshots and sort of dealing with brand, PR and marketing needs. And then a couple of years ago –  I think probably because Matt knew me from my time with him on Dark Age and having been the art director there – when they needed someone to come step into the Art Director chair for The Elder Scrolls Online they tapped me!

And so the secret to a good career in the games industry is to latch on to someone who’s really really up there.

It must have been daunting to be thrown into such an important role on a project that was already so established.

Yeah, The Elder Scrolls… I’ll put it up against any franchise you want to name right? Like your James Bonds, your Star Wars. People love this game, this world, they name their kids after characters in these games… they meet each other online, they get married because they met in Elder Scrolls Online.

I take my role as shepherd of that, as far as the art goes, very seriously. We’re doing stuff that’s important to people, you know, this is a real part of their lives, and you can’t take it anything other than seriously, and want to do the best by the fans who have made it such a successful franchise.

How do you cope with the idea that a decision you make might not sit right with the millions of people who make up its existing fanbase?

The challenge to not disappoint people is always there. But when you’re in a creative position, and you’re surrounded by a lot of other creative people, the best you can do is just your best work and hope that everybody recognises that you’re trying your best to maintain a level of quality and honour the product.

We work hand-in-hand with [the developers of the mainline Elder Scrolls series] Bethesda in regards to what we’re doing with the property, the places we’re going and the additions we’re making to the world. There’s always a level of partnership there, making sure that we’re not overreaching, we’re not going too far in one direction or the other when it comes to the storytelling or what we’re doing with the characters.

Is that stifling? Having to work within these strict bounds and established guidelines? Do you and your team have enough freedom to put your own personal creative stamps on the Elder Scrolls universe?

There is a lot of collaboration and a lot of back and forth between the artists and all of the other departments. So for instance, my concept artists are constantly emailing writers or our loremaster to make sure that before they put pen to paper and create something that they understand what the purpose is. And if you get that out of the way, and you have a deep understanding of what this needs to be before you start to draw it and paint it, then everything else flows from that.

The same thing can be said for every other team down the line, when it gets out of concept and it goes to 3D, the fixture team or the figure team. And a large part of my job is making sure that I’m directing it in a method that is going to be consistent with what everybody wants along that chain.

You’ve been in the games industry for a very long time now, since the late 1990s. Where do you think your biggest learnings have come from?

The last two years have been the most intense training course of my life. I mean, I had a sense of what the job was going to be because I had done it before in another capacity, but the difference between Dark Age and Elder Scrolls is legion. Elder Scrolls is a much bigger game, much more complex, much deeper lore, much deeper responsibility to a legacy.

And then beyond that, it’s been a lot [of] really learning how complex a project like this is created. Seeing how all the cogs come together and how all the gears have to match to get something from the page to people’s screens has been really amazing to witness and start being a part of.

The amount of work that goes into coordinating and getting something that’s not only artistically satisfying, but satisfies the gameplay needs and the story needs and then satisfies the wants and desires of millions of players out there. It’s been amazing. So yeah, the last two years have definitely been the greatest growth period of my life.

So what’s your day-to-day like? I’m going to guess… a lot of meetings?

Yeah, I do a lot of meetings with the various groups, the most comprehensive meetings I have are three times a week I’ll meet with the concept team, where we go over the concepts that are coming in and we just make sure that it’s all going in the right direction, because the more time we spend making sure it’s right at concept phase, the fewer problems we’ll have down the line.

Interspersed with that, I have regular weekly meetings with the environment team, with the figure team, with visual effects, basically, with all the various teams to make sure that I’ve got my eyes on what they’ve been doing to make sure that it’s all working towards the same goal as far as what the story is trying to express.

And then interspersed amongst that are also meetings with producers to make sure that all the problems that might be coming up in the coming weeks are being addressed to make sure that we are thinking ahead, and that we know what’s in front of us so that we don’t miss anything, basically.

So yes, it’s a lot of meetings and a lot of fun looking at a lot of really cool art.

How do you find management after starting your career as an artist?

I often tell people, ‘you know, it beats digging ditches.’ So for anyone who has even an inkling to have some sort of art career, to end up being in a position where I get to not only see a lot of beautiful art created in front of me but get to be the one to say, ‘let’s go this direction and not that direction?’ It’s cool, I dig it.

What’s the most common misconception about what you do?

I do not play games all day.

I mean, I have to go into the game to see the art when it’s finally in, but you know, it’s a review process. It’s not playing a game, it’s working on the game. And I suspect that a lot of my colleagues would say the same thing.

We’re working really hard. We do four major content drops a year – that’s a lot of content to push out – and staying ahead of it and trying to keep your energy up while you’re working at home and your kids are running around on the floor above you and you’re trying to make it all work… it’s daunting sometimes.

Aside from The Elder Scrolls Online, who do you think is doing really great work in terms of art direction in the industry right now? Which games are impressing you?

I still think World of Warcraft has a great art style. It is unique and it is of itself. But to think that those guys made a really smart decision about where they wanted to take their art direction 18 years ago, however long ago WoW launched… I still think they do it really well. But the one I’m keeping my eye on is Blue Protocol. I really, really love the look of that game.

How about in other media? Do you have time to enjoy other forms of media?

I just finished Castlevania [on Netflix]. For a western produced, quasi-anime there is some really, really top-notch animation in that series – like really good. It’s always fun to watch a show like that and get to the section of the show where you can really tell they spent their animation budget, all of a sudden it just goes through the roof. I love that.

The Elder Scrolls Online is available on PC, as well as PlayStation and Xbox consoles. It released its latest expansion, Blackwood, in June 2021.