Does Catherine Hardwicke's 2008 vampire film stand the test of time? This adoring crowd in Melbourne suggests it does.
Amy Loughlin 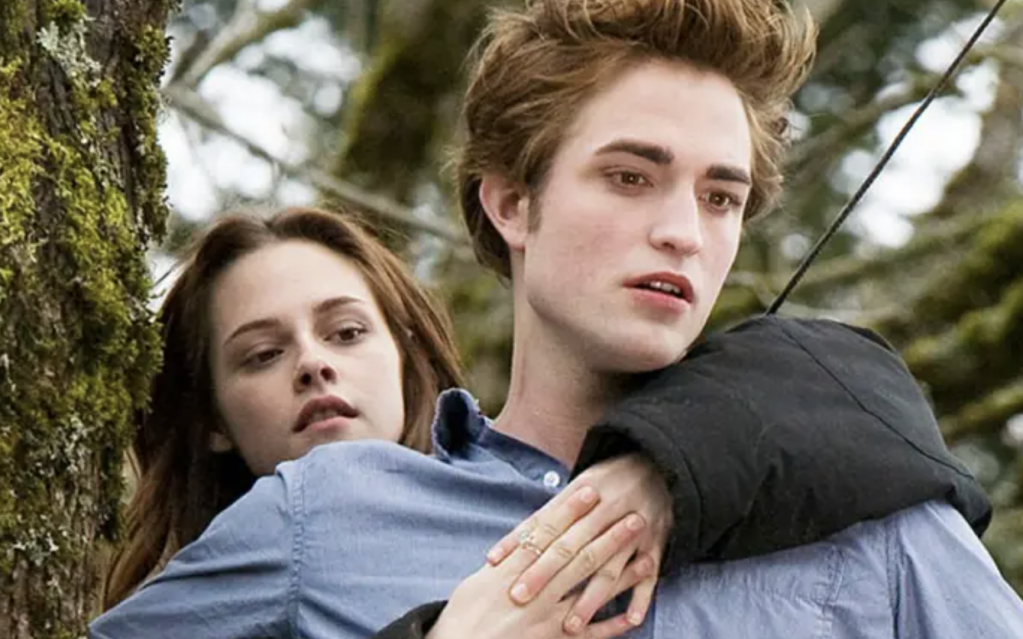 Kirsten Stewart and Robert Pattinson take to the trees in Twilight. Summit Entertainment.

It’s a Friday evening in March at Cinema Nova in Melbourne. Somewhere in this building, Robert Pattinson is taking his highly anticipated turn as the caped crusader The Batman while Kristen Stewart delivers an Oscar-nominated performance in Spencer. But I’m not here for those screenings – no, I’m here to watch the film that made them both famous, Twilight.

Yes, Twilight – the 2008 romantic fantasy film, based on Stephenie Meyer’s 2005 novel of the same name. This is the first time that the teen flick has ever been played at Cinema Nova – and judging by the nearly sold-out theatre of 18 to 40-something women that have made the trek here, not a minute too soon.

‘The reason this film became such a cultural punching bag is because it’s for teenage girls,’ argues moderator Lucy Fenwick Elliott. But she immediately concedes: ‘It’s a weird film! Let’s all be honest about this first film, it’s really weird.’ The audience laughs and nods in agreement – seemingly no one is more critical of this franchise than the fans who have re-embraced it in this Twilight ‘Renaissance’ we’re living through.

Dr Athena Bellas, host of the Teen Screen Feminism Podcast, agrees. ‘When you read reviews from the period that Twilight came out, reviewers were talking about girls as being completely unable to use their critical faculties, and sort of masking that as “concern” about their capacity to understand what Twilight was really about.’

So what was Twilight really about? It’s easy to dismiss it as something frivolous – a somewhat problematic love story, a passing fad without much artistic merit that had its moment, a curio that should be left in the previous decade. But if this evening is anything to go by, it still has plenty of cult appeal, and deserves to be analysed – as it increasingly is – through a feminist lens, especially as a relatively small-budget film led by an early career female director and female screenwriter.

‘This was the film that proved, from a monetary perspective, that even though we earn 75 cents to a man’s dollar, the female dollar still pays,’ says Maria Lewis, writer of feminist fantasy literature, as we touch on how women movie-goers have been consistently undervalued by the studio system. ‘And not just one of them – we’ll buy the T-shirts, we’ll buy the merch, we’ll buy the dolls, we’ll buy the whatever – we’ll invest!’

Film Review: The Batman returns on a staggering scale

Despite the goldmine this demographic represents for studios, as Lewis says: “Anything that female fans, particularly young female fans, are fanatic about is considered less valuable.”

One of the most difficult touch-points for fans of this series is the treatment of its first director, Catherine Hardwicke. ‘She was bullied on set,’ Lewis says. ‘She was bullied in the studio system … They literally replaced her with men going forward.’

Catherine Hardwicke fought against what many believed Twilight should be, using the film’s mid-size budget to tell a love story that young women wanted to see, with a great deal of attention to everything from its stellar soundtrack to its aesthetic choices. ‘That was her pushing for those artists, her chasing those people, her chasing those ways to make a thing feel richer than it was is,’ Lewis says. ‘And the way you do that is with aesthetic, like the costume choices, the location choices, the music choices –  and they replaced her with the dudes that did American Pie.’ This receives a loud chorus of boos from the crowd.

The film launched the careers of many actors (the two main leads, as well as Anna Kendrick of Pitch Perfect fame, Justin Chon who directed the 2021 indie hit Blue Bayou, etc) but also people behind the scenes. Screenwriter Melissa Rosenburg went on to be the showrunner for Netflix’s female-led Marvel hit, Jessica Jones. “Jessica Jones changed the perceptions and depictions of women on screen, that doesn’t get to exist literally if Twilight doesn’t exist, if she [Melissa Rosenburg] isn’t elevated to those positions of power,’ Lewis says.

As the panel wraps up and the first opening logo for Summit Entertainment appears on screen, the crowd collectively erupts into applause. What ensues is a night with a level of audience participation that would rival any midnight screening of Rocky Horror.

This audience doesn’t just like Twilight – it knows the movie intimately, every visual and audio cue, every laughable line and every character entrance (most of which are cheered). We loudly recite the cringey lines in unison and we sing the soundtrack in a collective chorus, especially when Muse’s ‘Supermassive Black Hole’ plays during the infamous baseball scene. People are wiping tears of laughter from their eyes and gripping each other for support.

Perhaps it’s a sign of our maturity as an audience when the older male side characters get more whoops and cheers than the intended love interests – specifically the more stable adult figures, Charlie (Billy Burke) and Carlisle (Peter Facinelli). It could also be a sign of our increased emotional maturity when the crowd shouts ‘Gaslighter!’ and ‘He’s toxic, babe!’ every time Edward lies to Bella.

By the end of the film, appetites have been – for now, at least – sated. However for those that need more, the sequel New Moon begins immediately after.

But with Twilight, as for vampires the world over, the knowing hunger will return. As the credits roll, one of the biggest rounds of applause is for Catherine Hardwicke’s name. You can feel the genuine love for what she did for a generation of women filmgoers.