Ian Dunlop led a long, energetic life making some of our most important and enduring films. History with a capital H.
David Tiley 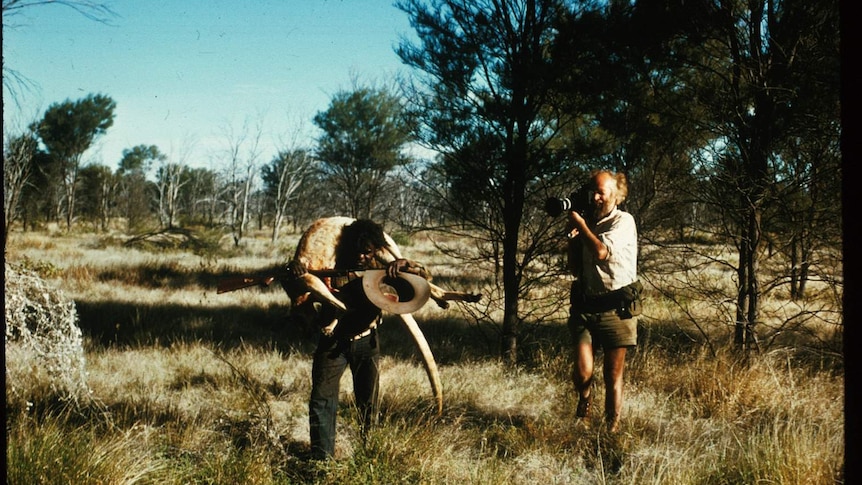 What kind of ritual should carry us through the death of Ian Dunlop? As one of the key ethnographic filmmakers in Australia, he filmed cultures which created powerful liminal dramas to take a person beyond life, wrapped in a shroud of culture and memory.

The National Museum of Australia (NMA) carries the transcript of an event with Ian Dunlop, with editor and colleague Pip Deveson and Dr Peter Thorley, held in 2011. Talking about his most celebrated series, he started at what he called the beginning.

In the time before time two great ancestral beings, the Djang’kawu sisters, went in their canoe on a great journey. They were beautifully decorated and around their necks they hung dillybags, and in the dillybags were the symbols of the Djang’kawu Law. They landed in north-east Arnhem Land at a spot which they named Yalangbara. Here they created the first people, the children of the Djang’kawu, the children of the Rirratjingu clan. They also performed many other creative acts when they were here: they named and gave meaning to all the natural phenomena; they thrust their digging sticks into the ground from which wells came up; and the sacred Djuta trees. For untold years the Law of the Djang’kawu continued.

Some essence of Ian Dunlop remains in his extraordinary thirty-year output of films, many absorbed into gargantuan compendiums, some slipped out in specialist areas, always with excellent crews in conditions that urban Australians would see as the essence of horrible.

He was born in the United Kingdom in 1927, and was a post-war migrant to Australia, to Sydney University and the Commonwealth Film Unit in 1956. He was thrown in the deep end.

He made a totally conventional film called The Australian National University, now a piece of accidental ethnography in itself.

Two years later, he was filming at the Giles Weather Station in the Gibson Desert 750 km from Alice Springs, using 35mm colour film. As a construction crew met the Traditional Owners, Balloons and Spinifex revealed his life’s work.

From now on he lived with a quandary. balanced between between conventional filmmaking and ethnography, each with very different rules. He was steadfast in the evolution of ethnographic filmmaking in Australia as it moved from ‘objective’ recording of customs through to participatory filmmaking and ultimately works made by Indigenous filmmakers. At the same time, the medium traversed all the possible technologies, though Ian Dunlop’s world was celluloid.

That whole story is outlined in The History of Australian Ethnographic Film, from the National Film and Sound Archive, which is an excellent read.

Pressures fuelled by tourist development concerns and military needs, and the extension of bureaucratic control over formerly remote areas, saw round-ups of Aboriginal people and their removal from their lands to government camps and settlements such as Kintore, Papunya and Yuendumu. Dunlop came back from the Giles trip and arranged (with AIAS providing funding and acting as producer) to return in 1962 to make ethnographic films. He took two newly-arrived families from a government ‘settlement’ back to their country and they showed him various aspects of their life in the desert. This resulted in the publication of a long (19-part) series of films made over the next six years entitled People of the Australian Western Desert.

A pioneer of scale

He was perfecting the art of the longitudinal project which could extend over years and generations. The largest was The Yirrkala Film Project, which extends to 22 separate titles. He made a lot of other films – as early as 1962 he made Dances at Aurukan, in 1978 he made Narritjin in Canberra, and added Conversations with Dundiwuy Wanambi in 1982 in a strand which tends to focus on the formal arts.

In her explanation to the NMA audience in 2011, Pip Deveson talked about the beginning of the Yirrkala project.

The very first thing that Ian filmed in 1970, the year before this, was a village council meeting at Yirrkala that had been called to discuss the film project. The chairman of the council, Roy Marika, one of Mawalan’s brothers, told the other elders gathered there:

His filmography is a bit slippery because he would rework the original scenes to explore new meanings, and to balance out that conundrum between lean story and inclusive detail. There were various shorter versions for wider consumption.

The Australian writers don’t seem to engage so much with Towards Baruya Manhood, shot in colour in 1972, which was 9 by 50 minutes long, and Baruya Muka, cut into 17 by 50-minute episodes. The project began with a French anthropologist in Papua New Guinea. As an aside, the central figure in the climactic ceremony ultimately became a filmmaker, trained by the French who supported the emerging local screen sector.

In 1996, Les McLaren and Annie Stiven made Taking Pictures, a 56 minute documentary about ethnographic filmmaking in PNG. Australian Screen Online has three fascinating clips, including Dunlop himself which reveal the enormous changes which occurred from racist exoticisation to deeply immersive, cooperative filmmaking which understood the power dynamics in the process.

Underneath the often boys own derring-do of these films, is a profound lesson in the morality of filmmaking, which has now turned itself into the diversity revolution.

Here is more of that discussion session at the NMA.

I wonder if you might tell us a little bit about what goes on in your thinking now when you sit here 40 years on and look at that footage.

IAN DUNLOP: One of the main things that struck me seeing this film was the beautiful shooting of Dean Semler, the cameraman. I must acknowledge the huge debt of gratitude that I owe to the rest of the unit: in particular Dean Semler, camera, and Bob Hays, sound, who did an absolutely amazing job.

PIP DEVESON: Can I just mention Dean Semler went on to win an Oscar for Dances with Wolves. But you can see the brilliant handheld camera work – just amazing with all this action going on around him. How he did it, I don’t know.

IAN DUNLOP: To be perfectly honest, in seeing this film today I saw many more things in it, more richness, than I had perhaps ever seen before. It’s a long time since I have seen the film – probably some 20 years. Of course, when you are shooting the film, you only have a fairly vague idea of what’s going on. It is only afterwards when Wandjuk documented it with me that I got the richness of all the symbolism. When it’s going on, you just hope that what you are focusing on is the most important stuff. If you see something else happening, you gently grab Dean Semler’s shoulders and move him around to pick up something else. You are working to a certain extent in the dark. You don’t have someone whispering to you in your ear exactly what is going on.

The National Film and Sound Archive published a fine collection of comments about Dunlop, which stand as his public eulogy.

Most people remember him from his later years, where he became a legendary figure at the Film Australia headquarters in Lindfield. Here he tended his own work, keeping not just the finished films but the outtakes and smaller trims as well. The details are all precious, and who knows what meaning they will have in the future?

He had a much wider sense of history than personal pride. He worked on the preservation of earlier ethnographic filmmakers, including Baldwin Spencer, Frank Hurley and the Chauvels, even though he saw their practice in very different ways. He helped to navigate the tangle where racist eyes found the sacred and the secret.

Trevor Graham, his friend and colleague, wrote a lovely piece on Facebook, which says so much. His ending can be ours as well.

“The Ceremony – Djungguwan” DVDs were launched by Film Australia to mark UNESCO World Day for Audio Visual Heritage and presented to their collection in 2007. The documentaries featured in the set are cultural crown jewels: a priceless part of Australia’s heritage made with and for the Yolngu for future generations. Ian Dunlop will never be as well-known as film directors like George Miller, Peter Wier or Gillian Armstrong, but he has left a legacy to Australia’s cultural and filmmaking heritage every bit as important, and one that may well stand the longer test of time.

As Wukun Wanambi says in the Ceremony Djungguwan, ‘So this is now for the future generations. Dhuwa and Yirritja so that you can see this picture and remember what we are doing’.

Ian’s films will live on, but he will be greatly missed.