Screen Forever is leaner and meaner as the screen world mutates

The Screen Forever program this year offers the drama of trying to be in two places at once in a packed program.
David Tiley 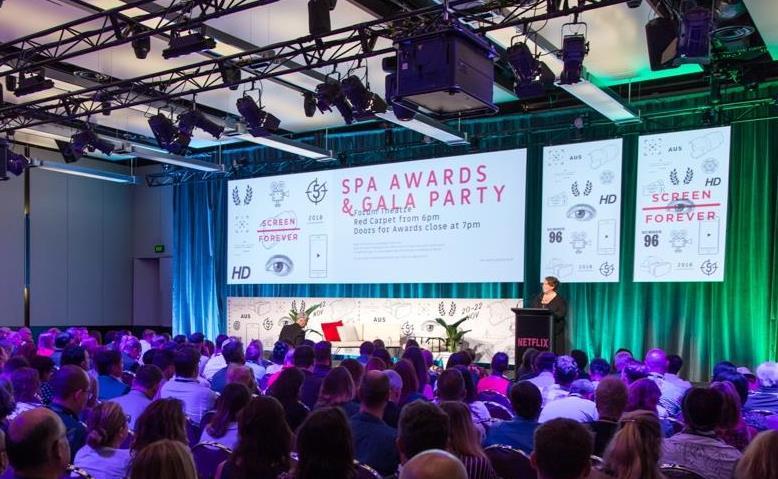 Somehow the program for Screen Forever 2019 leaves us less panic-stricken than the 2018 version. There is more time for mingling and discussion, and less sessions. The particular problem of the fringe panel which turns out to be the best of the whole conference seems to have diminished. In the past couple of years the sessions have promised a lot and the blurb has illuminated powerful questions but the panellists have not been able to answer the challenge.

Rachel Griffiths will deliver the Hector Crawford Memorial Lecture, which she has been preparing for a while. We hope she minimises the sentiment about the fluffy Mr Crawford, the political crusader who also invented Australian factory production for television. Griffiths has a unique perspective which could be used to provoke some useful discomfort in the system.

John Seale will talk cinematography to producers. We are hoping he concentrates on learned insights and active observation rather than reminiscence, though stories from Fury Road, The English Patient, Cold Mountain and The Perfect Storm will keep us all happy.

Tea Uglow will deliver another extraordinary session from the hive of Google Labs; she is one of the least predictable people allowed in public by monster companies and shows us that the future is about new thinking rather than new toys.

The guts of SPAA is about a decorous version of pitching, reconnecting, finding markets and experiencing change. But there are still the insight-driven sessions which depend on the longer game of placing ourselves in the landscape with the right tools and the right map.

The opening Tuesday hits early delegates with a round of VR, which is now an liminal ritual for most conferences. That is vital because VR is as much a production tool as a consumer experience. There are also a couple of valuable back to basics sessions to stabilise the producer who is aware just how much this opportunity costs. The session on loglines is a useful provocation:

‘In this Log-line writing Lab, designed by Australia’s premiere marketing agency The Solid State, Walter and Anna discuss the importance of a well written log-line, why they are the bedrock of any Pitch and how they impact a film’s most valuable marketing asset – the trailer. The session will include a prac component where Walter and Anna will workshop one example with the Audience.’

This is followed by a meditation on the art of the hustle from one of its modest experts:

‘This session, presented by Ellenor Cox, will enable you to make the most out of your time at Screen Forever. Learn tips and tactics for pitching, networking and negotiating, along with strategies for ensuring your personal brand and projects create a lasting impression.’

By Wednesday delegates are faced with ugly choices. London multidisciplinary immersive filmmaker Karen Palmer discusses the future of perception at the foggy hour of nine am:

‘At a time when the industry is facing uncertainty and anxiety, Karen’s message is about leaning into that fear and using new technology to tell richer stories that help us understand the human condition in a much more meaningful way. Don’t miss her discussion of ‘Unconscious Bias and the Future of Perception’ at Australia’s premier screen industry event this November.’

At 10 am, Michael Carrington opens himself to scrutiny as the Director Entertainment and Specialist at the ABC, which covers most of the ABC TV content beyond the separate division of New and Current Affairs.

He is up against Jackie Edwards, the head of the BFI’s Young Audience Content Fund designed to galvanise the BBC and Channel 4.

‘In the 6 months since its launch, the BFI’s YACF has stimulated development and production across a range of areas of young audience content including live action teen drama, indigenous language programming and has resulted in ITV and Channel 4 commissioning more YA shows than they have for many years.’

They are both up against the discussion about mental wellbeing provoked by the recent documentary The Show Must Go On, which could be cathartic and uncomfortable.

To make the choice really difficult, Indigenous Stories: Moving the Conversation Beyond Consultation will allow key people to lay into the tensions around ‘the often contentious matter of intellectual property rights, revenue and collaboration with Indigenous Screen Creatives.’

The next round of choices pitches Jonathan Olsberg on ‘how the content explosion opportunity is disrupting the global production and consumer landscape.’ His company can be described as ‘a creative industries strategy consultancy that provides high-level advice to public and private sector clients, specialising in the worlds of film, television and digital media.’ Beyond that fluff he is a banker, a producer, a distributor and an international sales agent and a shrewd analyst of international standing.

He is already known here as one of the external assessors for the first round of the Screen Australian Enterprise program in 2009/10. He will be attempting to entice an audience from a session which gathers the drama buyers together, along with a masterclass on development from an international perspective and the growing conversation about inclusivity and diversity.

Revived by lunch, delegates have a particularly horrid choice between a panel on genre stories through diverse lenses, in which writer and script guru Mike Jones conflates two important issues to touch some raw nerves about neo-genre. But the smart producer is going to hanker for a discussion of panel research, social media and focus group input and its role in the executive decision making process. If they get onto the role of cast, some producers may go into orbit with sheer rage and despair.

By now the day has become brutal. SDIN, the Screen Diversity and Inclusion Network, will launch a new app for The Everyone Project which allows a statistical map of the movement.

At 2.45 an American producer slides quietly into the schedule. Far from a machine bunny, Dan Jinks has an academy award for American Beauty, was nominated for Milk, and has also been active in television with shows like Pushing Daisies.

‘Dan will talk about being a creative producer working largely outside of the Hollywood studio system, the importance of risk taking, collaborating and his enduring love of stories.’

Or you could be watching the catchily titled Films That Pop – but for who? This could well be the sleeper session that really cuts through because it is about the hideous problem of good films that never get the resources to grab an audience.

We will hear from Mark Montefiore, head of Canadian indie production house New Metric Media about the creation of dedicated fanbases. Kristy Matheson, the highly respected Melbourne director of film programs at ACMI reports on her Natalie Miller Fellowship research project. ‘She looked into how international cultural and film institutions are staying relevant through targeted curatorial strategies, embracing diversity and leaning into their local communities – and are thriving.’

Mark number 2, Marc Wooldridge, former MD of 20th Century Fox Film Distribution for Australasia talks about the way that Three Billboards Outside Ebbing Missouri and The Favourite beat off the zombie hordes of tentpole movies to score mainstream success.

While producers can sit stunned in their seats contemplating a future for smaller films, they could nerve themselves up for a session about employing directors, on the way to talking to Mike Sneesby, the CEO of Stan who could be the hero of domestic streaming.

For some reason the program is now linear except every new session starts fifteen minutes before the end of the previous one. So Tea Uglow is a bit disrupted, along with Paul Anderson, the CEO of Network Ten.

On Thursday morning, Charlotte Koh will demonstrate the power of agility in the US television model, as she roams from Fox Searchlight, Emmy nominations and startups in the short show realm. ‘She is now Head of Digital Media and Unscripted at Hello Sunshine, Reese Witherspoon’s female-focused media company’, according to the program.

‘Charlotte will talk about new storytelling platforms including diversifying the way stories are told to remain sustainable and how to reach new audiences.’

At the same time Jonathan Olsberg is back with a truly nitty-gritty session on Taking Care of Business.

‘Much of Australia’s original screen content is produced by small to medium businesses who not only need to find, develop, make, and sell quality programs but also run a business. What are the key strategies producers need to use to develop and grow their business and company brand? What can we learn from other industries? What is the role of government in supporting small business?’

The executives of large companies will be free to attend the John Searle session.

eOne pops up later in the morning in the person of Stuart Baxter, the president of international distribution to talk about the company’s drive to grow and dominate in a time of streaming triumph. He will claim eOne remains committed to Australia, and will succeed as an integrated studio operation combining film, television and digital sales and production activities.

Most of the day concentrates on practical analyses. Producer Beck Read talks about triplet doc Three Identical Strangers, Dirt Music and The Cry provoke a conversation about adaptation, The writers’ room for The Unlisted opens up, while producer Greg Bassett talks about his co-pro with China, The Whistleblower. And Sesame Street gets to dance about its fiftieth year.

Prism, the think tank which opened last year in Sydney, has another shorter outing here with a sombre question:

Just before the awards and knees-up, a bunch of confident TV people talk calmly about ethics in reality TV.