TV Review: Too Old to Die Young is a grandiose television event

Thirteen hours of Nicolas Winding Refn's neon vision may be too much for some, but Adrian Martin finds intrigue amidst the slog.
Adrian Martin
[This is archived content and may not display in the originally intended format.] 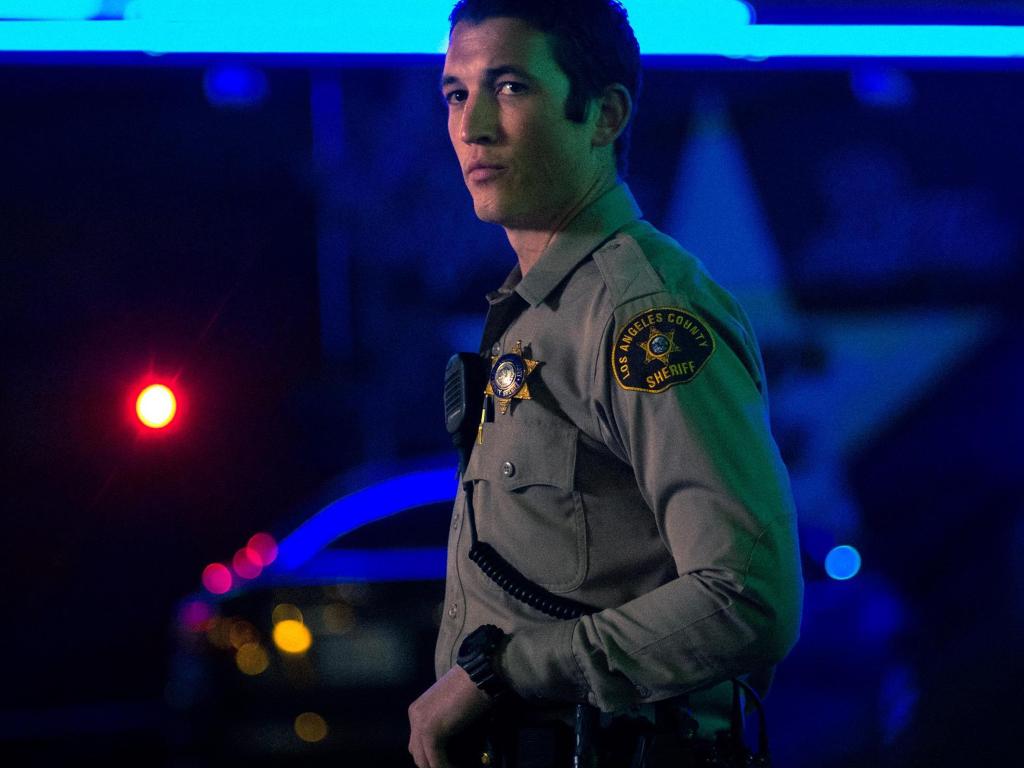 A smooth, lateral tracking movement follows the path of Yaritza (Cristina Rodlo from the 2019 Miss Bala remake) along the façade of a cheap motel. With a gun in one hand and a knife in the other, Yaritza swiftly disposes of three henchmen stationed outside two rooms, after greeting them with a breathy “Hi, guys”. She then coolly steps inside, kills three more guys (pausing to reload her gun to finish off the final victim) ­– but leaves alive the women who have been corralled into sex slavery. We see a Nazi flag positioned prominently in one of these rooms. All of this is done in one take (including diverse digital effects) lasting one and three-quarter minutes, with no slow motion, underneath the dreamy synth music score of Cliff Martinez. It’s the type of undeniably virtuosic – even breathtaking – moment that fans of Quentin Tarantino’s Kill Bill movies are likely to acclaim: such spectacular violence, such a strangely poetic beauty of bloody action – and with a feminist message, too! Oh, did I mention that Yaritza likes to call herself the High Priestess of Death?

Too Old to Die Young ­– not to be confused with the excellent recent Chilean film by Dominga Sotomayor, Too Late to Die Young – is a 10 episode, 13 hour series by Nicolas Winding Refn (Drive, 2011) for Amazon Prime. Very much in the footsteps of David Lynch and Twin Peaks: The Return, Refn – who directed every episode, sharing the writing credits with Ed Brubaker – describes it not as an episodic series but one, long movie. Long and slow it certainly is – and means to be ­– with an excruciatingly stretched-out storyline that is far from being resolved at the end of the first season.

Refn aims for excess on most levels of style and content; Too Old to Die Young is definitely not for the squeamish. Even the series title appears anywhere during an episode that Refn chooses to drop it. I confess that, one scene and five minutes down in the first episode, I was entirely ready to ditch it – every line of dialogue was preceded and followed by a protracted pause, the actors (Miles Teller as Martin and Lance Gross as Larry, two crooked cops) looked constrained to emote as little as possible, and the colours in literally every shot are an unforgiving mélange of hot pink, purple, blue, yellow … (with as much neon lighting crammed into the frame as possible). But I stuck with it, and I’m glad I did. (The second episode, set in Mexico and delivered almost wholly in subtitled Spanish, is the best of the series.) I have plenty of reservations about its increasingly convoluted, self-destructing themes, but Too Old to Die Young is definitely worth something as a fairly unique “TV event”.

The motor of the story – if motor is the right word for this protracted crawl through many characters, places and (for a long time) only loosely connected events – is simple. Larry is killed in the street by a mysterious figure, Jesus (Augusto Aguilera), who declares that he is avenging the murder of his mother. In fact, Jesus has targeted the wrong guy; Martin (Teller) was the culprit. From there, the plot splits in two: while Martin spins deeper into obligations involving shady underworld figures, Jesus returns to his birthplace of Mexico, where the ageing patriarch of his criminal family, Don Ricardo (Emiliano Díez), dotes over Yaritza and rages over the creeping loss of their American territory. But is his hot-headed, bad-mannered son, Miguel (Roberto Aguire), really the best choice to take over this empire? These two major plot strands will slowly intersect – due, in part, to the unusual therapeutic practice of the beyond-New Age Diana (Jena Malone), herself straddling the spheres of crumbling law and anarchic disorder.

Like in Only God Forgives (2013) ­– the exact point in his career where he became more ambitious and grandiose – Refn tries to keep a balance between elements of the film noir genre (crime, mystery, murder) and formal explorations that border on the avant-garde (sometimes rather chintzily). It’s the same combo that Lynch perfected in Lost Highway (1997) – with “neo-pulp” co-writer Barry Gifford giving Lynch there what graphic-novelist Brubaker gives Refn here – and that Luca Guadagnino scuttled in his atrocious remake of Suspiria.

As with Tarantino, one can always play the game of spotting the influences and allusions. It’s a heady stew: Lynch, William Friedkin, Gaspar Noé, Kenneth Anger (for the Aleister Crowley black magic ingredient), Alejandro Jodorowsky (Refn’s avowed artistic mentor), Rainer Werner Fassbinder (for the eye-burning garish colour schemes), Abel Ferrara (a scene from his Bad Lieutenant is restaged for a film-within-the film segment), even that severe, spiritual master, Robert Bresson. Both Teller and Rodlo are the blank “models”, utterly devoid of facial expression, that Bresson never had a chance to meet and cast ­– but Refn hedges his bet here by introducing the psychological motivation of sociopathy (Martin frequently admits to his “lack of feeling” when killing).

I defy anybody to make coherent sense of Too Old to Die Young, to discern or decipher its “deep structure” of meaning. With this necessary caveat: it is entirely possible that Refn and Brubaker intend to re-scramble the plot elements (and their associated semantic values) in the next season, if they ever get to make it. But let’s juggle with what has been presented to us so far in this saga. Observe, first up, that this is a narrative entirely obsessed with what is tagged today as “age inappropriate” relationships. Martin started sleeping with Janey (Nell Tiger Free) when she was 16. The relationship between Yaritza and Don Ricardo (who “adopted” her) remains charged and ambiguous. This brings us to an incest motif: there’s a strong rhyme between Jesus with his mother, Magdalena (Carlotta Montanari, glimpsed in lurid fantasy flashbacks) on the one hand, and Janey with her wildly out-of control, coked-up father, Theo (William Baldwin), on the other. In this series where single parenthood seems to be the golden rule, there’s even something a little odd going on between Diane’s ailing hired killer Viggo (John Hawkes) and his senile old Mom, Eloise (Joanna Cassidy).

Is all this coded as so much “perversion” in the moral landscape of the series? It would appear so: while Yaritza goes about freeing oppressed women with her nifty knife/gun work, Diana despatches her killers (Viggo and Martin) to deal with those who abuse vulnerable children (there is a nod here to the great films of Samuel Fuller). At the end of this mission of righteous revenge, Diana proclaims that there will one day be a rebirth of innocence, a new dawn for mankind.

At the same time, however – and this is where the theme-diagram gets confusing ­ and contradictory – Refn is toying with a Twin Peaks-style template of Good versus Evil conceived on a mystical, supernatural and cosmic scale (as he also did in The Neon Demon, 2016). Yet Yaritza is surely positioned on the negative side of that opposition; and Martin himself is all over the semantic map. There’s also a heavy-handed overlay of political satire “in the age of Trump” that marks the series’ lowest point, and clarifies little: cops sing happy chants about fascism, the underclass drapes itself in Nazi flags, and most of the “ordinary folk” on display are unadulterated grotesques. Plus other complications: it is constantly implied that revenge-killing may not only be a little sociopathic, but also liable to spin out of control; it’s just too much darn fun for the guys executing it.

All these doubts and confusions aside, however, what finally makes Too Old to Die Young (what the heck does that title mean, by the way?) an authentic TV event is the way Refn shapes it. He differs from Lynch and Twin Peaks: The Return in one, important respect: where Lynch attacks each scene as a separate entity and brings it alive in a specific way, Refn is all about what film scholars call stylistic parameters. That is, he sets up (with chief cinematographer Darius Khondji) a certain procedure – lateral tracking shots, slow pans, use of colour blur, extended duration, fixed “portrait” images – and he sticks with it episode after episode, giving rise to an extended pattern of echoes, comparisons and reversals between all 13 hours worth of scenes. Like in the best moments of The Neon Demon, Refn sometimes creates – through his fanatically fussy parametric choices – distinctive touches, like the fact that the faces of certain minor characters remain unseen or unidentifiable.

Recent TV production has attempted many bold and risky things, but no one – not even Fassbinder in Berlin Alexanderplatz (1980) – has gone this far out on a limb with a “house style” as intricate and sustained as Refn manages in Too Old to Die Young. That’s something, at least, to admire.

Too Old to Die Young is available on Amazon Prime.