Shockingly violent and pointedly political, this Amazon series is an ironic but refreshing antidote to supe franchising.
Mel Campbell
[This is archived content and may not display in the originally intended format.] 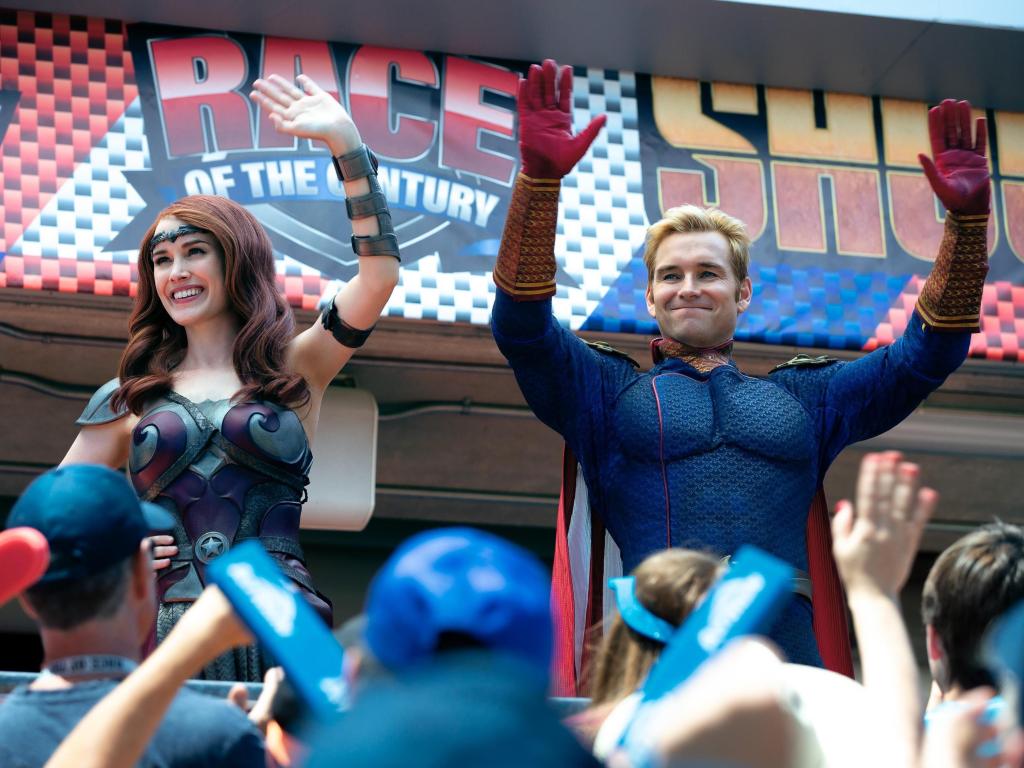 Image:  Dominique McElligott as Queen Maeve and Antony Starr as The Homelander in The Boys. Source: Amazon.

Watching the blackly funny Amazon Original series The Boys is a refreshing break from the repulsive franchise force-feeding we’ve endured like foie-gras geese this week from San Diego Comic-Con. It’s adapted by Eric Kripke, Seth Rogen and Evan Goldberg from a comic by Garth Ennis (Preacher), which was abruptly cancelled by DC imprint Wildstorm after six issues because it was uncomfortably nihilistic about superheroes, DC’s bread and butter.

The Boys suggests that in real life, superheroes would make all the terrible things about society even worse: fundamentalist religion; rape culture; corporate greed; poor scientific ethics; military-industrial politics; and the suffocating banality of celebrity. The way a monolithic corporation would control them via advertising and entertainment contracts would be no different to the way circuses once collected freaks, Hollywood studios stabled their stars, and sports clubs traded pro athletes. And what if superheroes used their powers carelessly to do whatever the fuck they wanted, because that’s what ‘power’ means?

Luckily, there’s a vigilante team of ordinary humans dedicated to putting down ‘supes’ by the dirtiest and most violent means necessary. Who watches the watchmen? The Boys.

Mild-mannered young Hughie Campbell (Jack Quaid, whose smile uncannily recalls his dad Dennis’s) was modelled in the original comic on actor Simon Pegg – who, having aged out of the role by the time it reached the screen, now plays Hughie’s dad. Like Shaun in Shaun of the Dead, Hughie is an affable slacker who works at an electrical goods store, helping people hook up their smart TVs.

But his life is changed forever in a slow-motion sequence so outlandishly gruesome I had to rewind it immediately to watch again: while Hughie is chatting in the street with his girlfriend Robin (Jess Salgueiro), speedster superhero A-Train (Jessie T Usher) ploughs right through her, obliterating her in a splatter of gore. It’s only the first of many such moments of shocking violence in which the show indulges.

A devastated Hughie stews over the unfairness of it; he won’t be fobbed off by A-Train’s perfunctory televised apology, or by “collateral damage” hush money from Vought International, the corporation that manages America’s superheroes. Then a foul-mouthed, Hawaiian-shirt-clad cockney named Billy Butcher (a tremendously charismatic Karl Urban, brandishing the most Kiwi-sounding cockney accent I’ve ever heard) shows up at Hughie’s work, offering him something better than justice – revenge.

But she learns how things work at Vought the #MeToo way. Later, moping on a park bench, she happens to meet Hughie. There’s an instant spark between them – but between his survivor’s guilt, her new and very public job, and the Boys’ plan to kill all supes, is their budding romance doomed?

Invisible but familiar currents of trauma and conspiracy drive the narrative onwards as the Boys go deeper. Why does Billy hate supes so virulently? What’s the deal with The Female (Karen Fukuhara), a mysterious feral supe the Boys rescue from a basement? What terrible thing happened to their former boss, Mallory? What is Compound V, and why will people kill to keep it secret?

But for me, what made this show enjoyable were the pointed moments of political critique it locates in unravelling the myths of exceptionalism and altruistic morality that cluster around superheroes. Groomed as mere media symbols of muscular American justice rather than actual peacekeepers, the untrained supes are terrible at fighting real crime, with devastating results for the civilians they encounter.

The most interesting character is The Homelander, who possesses a near-invulnerable suite of powers including flight, X-ray vision and laser eyes. Starr plays him with a Paul Rudd-like goofy bonhomie that disguises absolute ruthlessness; and he has a creepy fixation on Madelyn that’s part maternal, part erotic. Meanwhile, the Wonder Woman-like Queen Maeve (Dominique McElligott) has grown cynical and disillusioned, but deep down she still wants to do good. Like a boxer whose form is slipping, A-Train is afraid of losing his title as the World’s Fastest Man; and he nurtures a doomed, sincere love for Popclaw (Brittany Allen), a low-ranking supe whose career has slumped into sexploitative trash. Even preening fish-bro The Deep (Chace Crawford) gets into a depressing situation he can’t outswim.

I can’t figure out if it’s ironic or dispiriting to watch this show on a streaming network owned by a company whose market dominance isn’t too far off that of the fictional Vought International. The Boys throws our ugly cultural obsessions back in our faces, like Robin’s insides splattering all over Hughie. It lets us feel rage, like Billy. And, like a king who tolerates a jester’s mockery as an escape valve for his subjects’ inevitable resentment, Amazon is happy to let us have our fun.

All 8 episodes of The Boys premiere on Amazon Prime Video on July 26.

This year’s Sydney Film Festival is bigger than ever. We spoke to Festival Director Nashen Moodley to get his top…