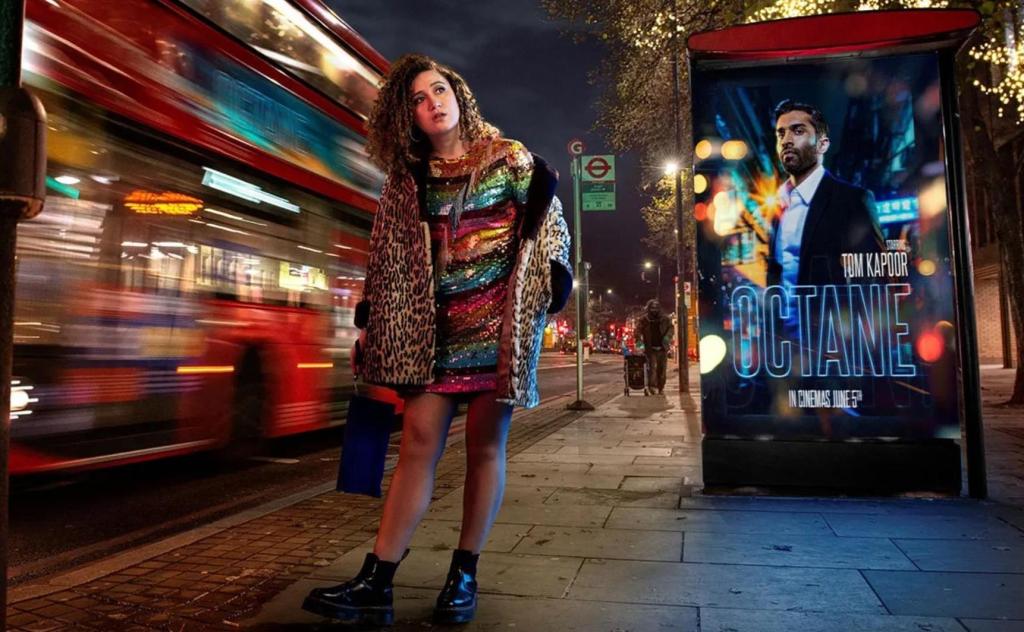 Rose Matafeo and Nikesh Patel in Starstruck. Image via ABC.

The other day I read a BuzzFeed listicle of ’17 famous celebs who dated fans’. The list trended on Twitter, as people joked that it gave them hope for their own love lives.

Similarly, many aspiring screenwriters and novelists were aflutter with envy after Riz Ahmed revealed that he’d met his wife, Fatima Farheen Mirza, randomly at a shared table in a New York café where they’d both come to write. ‘We were both jostling over the same laptop plug points, like a very modern way of meeting,’ the Sound of Metal star revealed, probably apocryphally.

Such stories seem even more fantastical in our cringe-sodden era of social-media-led star worship. On a darker note, #MeToo has also exposed tawdrier starstruck encounters which are, at best, bad sex with a celeb aired in sanctimonious personal essays; at worst, some stars use social media to groom impressionable underage fans.

It all makes a celeb-meets-normie London rom-com like Notting Hill seem like an impossible fairytale from a bygone era. But then the whole romance genre is built on the premise of a genuine spark between two people from radically different worlds. Enter Kiwi stand-up comic and Edinburgh Comedy Award-winner Rose Matafeo, last seen on Australian screens in the film Baby Done. Her signature blend of blurted quips and awkward physical comedy gives her new six-part rom-com series Starstruck a tantalising fizz of real-world possibility.

Jessie (Matafeo) is a 28-year-old New Zealander sharing an overpriced Hackney flat with her best friend Kate (Emma Sidi) and working two crappy part-time jobs: as a nanny for Sindhu (Sindhu Vee) and at a cinema, where her milquetoast coworker Joe (Joe Barnes) is clearly in love with her.

On New Year’s Eve, Kate drags Jessie into a crowded bar. Bored, and tired of queuing for the ladies’ loo, Jessie sneaks into the men’s, where her drunken mirror monologuing finds an unexpected audience in Tom Kapoor (Nikesh Patel). They head back to his place, where Jessie is shocked the next morning to learn that the babelicious, funny Tom is also a bona fide movie star.

At first this only shapes up like a fantastic one-night-stand story: ‘He can’t take it back now!’ Jessie gleefully tells Kate. ‘I am forever a stain on his sexual history.’ But Tom and Jessie keep finding excuses to see each other, and it’s clear there’s a real spark between them. As one of Jessie’s thrilled fellow nannies tells her: ‘It’s like fanfiction, but it’s real – it’s fan nonfiction.’

Produced by Toby Welch (Catastrophe, Breeders) and co-written by Matafeo and comedy writer and performer Alice Snedden. the dialogue is refreshing. Never too self-satisfied, it’s rich in offhand hilarities that land lightly. I barked with unexpected laughter at Jessie’s line, ‘Two hours later I got my period – like, touched by an angel.’

Matafeo is endlessly charming and hilarious as Jessie, who’s a familiar kind of zany but anxious rom-com heroine, just as Sidi’s Kate is a familiar kind of high-key BFF character. However, Matafeo and Sidi have a natural chemistry that transcends the clanking gears of genre; they come across warmly, like real best friends, in a way that carries the show through some of the bumpier bits, in which Kate and their other friends are a thousand times more starstruck by Tom than Jessie ever is.

Although Tom’s agent Cath (Minnie Driver) warns him not to date ‘civilians’ (‘You can’t fire me – I Star Is Born’d you!’), Tom seems primarily seduced by Jessie’s lack of interest in his job. Starstruck never seems terribly interested in the tainted glamour of show business, either.

We briefly see a paparazzi pack outside Tom’s apartment (they mistake Jessie for the cleaning lady); at one point he’s crowded by random fans demanding selfies; and at a low point he decides to sabotage a promo-junket interview by giving honest answers about his latest blockbuster role – and his sexy co-star Sophie (Nadia Parkes). But Tom’s job itself is never really treated as what’s keeping him and Jessie apart.

Rather, like the best rom-coms, Starstruck is about the way the central couple’s own insecurities cause misunderstandings that drive (easily fixed) wedges between them. Jessie gets the wrong idea about Tom’s relationship with Sophie, while he in turn believes Jessie’s ditched him for Dan (Jon Pointing), her dreadful Nathan Barley-with-benefits.

Over the course of almost a year, they meet up, remember their attraction, fight, and mope after each other. ‘You are genuinely the most stressful person I’ve ever met!’ Tom marvels. But Starstruck ends on a beautifully underplayed and genuinely romantic moment that left me hoping for another season.

Starstruck premieres on ABC iview on Wednesday 23 June, with all six episodes available