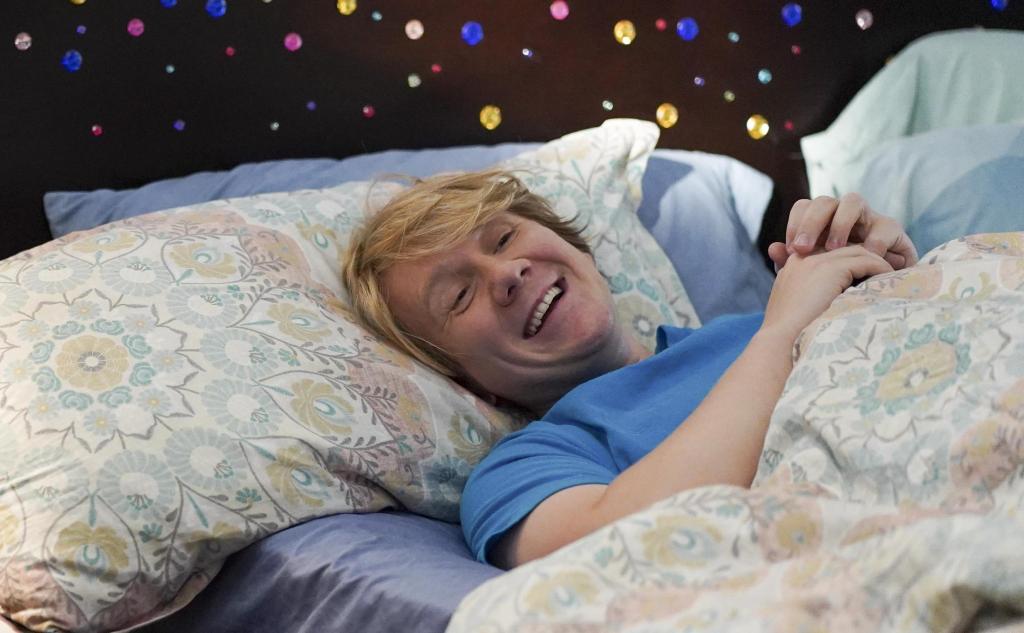 What if we never had to get out of bed? Josh Thomas in Everything’s Gonna Be Okay, courtesy Stan.

Josh Thomas is a mood. He can be funny, though the moments people tend to remember from his work are the dramatic ones: the string of deaths and near-deaths that ran through Please Like Me, the occasionally confronting examination of autism on Everything’s Gonna Be Okay. As a writer and creator, a lot of the things that conventional wisdom says people want in television – story, character development – feels shunted to the margins in his work. He gets by on mood; he’s like David Lynch if Lynch was more interested in colourful throw pillows and snuggling under a blanket on a beat-up couch with your friends.

Please Like Me was a critical if not ratings hit, a show about a group of twenty-something friends (and a mentally ill mother) that seemed so much a part of Thomas’ public persona it was hard to see how he could break free. Thomas pulled it off in Everything’s Gonna Be Okay by staying the same (well, his character is now named Nicholas) but changing everything around him. Now he was in the US, the befuddled guardian of two teenage girls, one of whom is autistic.

Thomas said in an interview: ‘I don’t really like plot. I just like hanging out with characters’, while one of his producers said ‘The log lines of Josh’s shows don’t immediately scream comedy.’ There’s truth in both statements, though things did happen in the first series of Everything’s Gonna Be Okay: the first series ended with a big trip to New York, where older sister Matilda (Kayla Cromer, who is on the spectrum herself) realised her dreams of living and studying there probably weren’t going to happen, and Genevieve (Maeve Press) discovered the exciting world of stand-up.

Season two begins with everyone in lockdown, though some are more locked down than others. Matilda is refusing to come out of her room, frantically glued to her laptop trying to figure out where her life can go from here now her dreams of studying music at Julliard are done. Everyone else – Nicholas’s boyfriend Alex (Adam Faison) is also staying at their house – tries to coax her out. Eventually they succeed and she takes a nap on the couch. Later she makes a difficult phone call. That’s pretty much it for episode one.

There are a handful of dramatic moments here. Matilda lashes out at everyone, saying to Nicholas, ‘Not all of us can prance around all day like you do’, which everyone else takes as a brutal insult and not a perfectly reasonable observation (the comment that Alex is just using Nicholas for his money seems harsher). Genevieve snoops around on Matilda’s laptop and sees her asking some tough questions online that seemingly get brushed aside by episode’s end but could come back to haunt her.

It’s a series as safe space, a place where childish people’s silly arguments about household chores can feel like a warm hug.

Or possibly never get mentioned again: this is that kind of show. The entire house (well, mansion really) looks like a messy teen’s bedroom, Nicholas wears a range of brightly coloured semi-pyjama outfits, and the only reason to take out the trash is to make room for more trash. The hook here is that in some ways the kids are more mature than their guardian, but most of the time everyone seems to be operating like a slightly hyper teen, one excited shout away from a late-night dash down to the 7/11.

With its sun-dappled cinematography and fantasies of an aimless life, the mood here is ‘what if we never had to grow up?’. The show clearly knows this and scatters elements around to puncture it (the series started with a funeral, after all), but that mood remains. It’s a series as safe space, a place where childish people’s silly arguments about household chores can feel like a warm hug. And if that’s not for you, Nicholas’ pathetic attempts to put his foot down are genuinely funny.

Pretty much all scripted entertainment is selling a fantasy of some kind. The reality on offer here is an emotional one, one where relationships are cosy but difficult and dreams are enough to live on so long as you can keep them alive in your heart. At one stage someone says, ‘you don’t know what I want better than I do’: it’s those brief moments of insight where this fuzzy, comfy series snaps into focus. It’s a shame they don’t last.