TV Review: All My Friends Are Racist is as absurd as it is self-aware 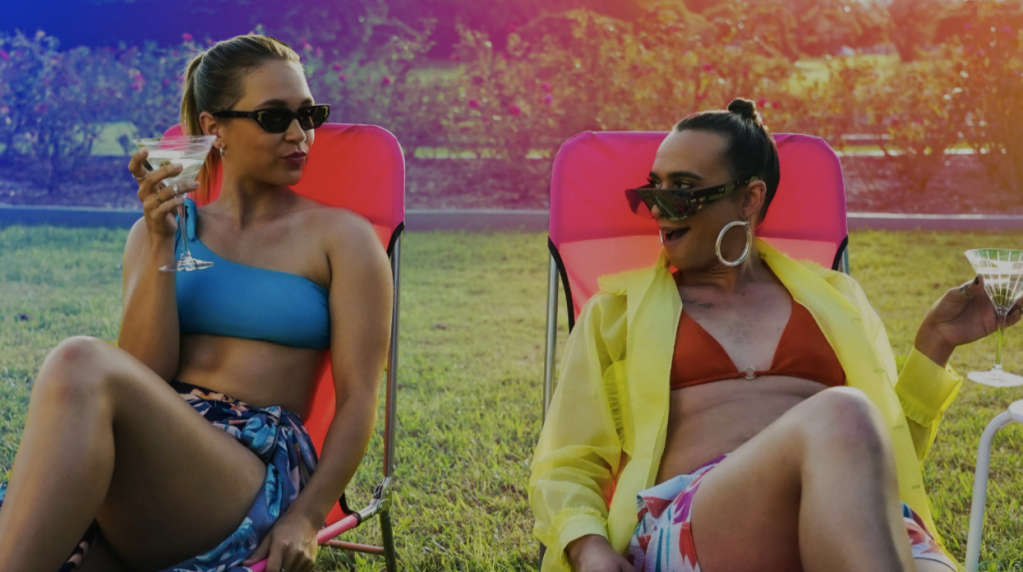 I like my coffee how I like myself: blak, bitter, and too hot for you. This is the same vibe that emitted from my television screen as I binged all five episodes of All My Friends Are Racist on ABC iView. Premiering on 24 August 2021, the hilarious and messy miniseries was created by Enoch Mailangi, co-written between Mailangi and Kodie Bedford, and directed by Bjorn Stewart. The presence of Indigenous creatives behind the scenes is firmly felt on screen. The Indigenous characters are flawed and funny, the white gaze is dismantled and mocked, and token wokeness is, finally, put to sleep.

‘Cancelled’ is used in inverted commas here because, while Belle is rejected from law internships after being deemed too controversial, Casey’s online follower count increases. The two best friends still maintain a life of privilege. Angered by the duo calling his girlfriend racist, Casey’s Young Liberal brother, Luke (Thomas Weatherall), tells Casey, ‘You’re just worried people will find out you had the same privileged, white upbringing as the people you call the enemy.’ And, to some degree, he’s right.

Casey has a judge for a mother (played by the indomitable Leah Purcell), and Belle has two prestigious artists for parents who paid for her to attend private school. From the familiar on-location sites, Casey and Belle live and socialise around New Farm, an artsy Brisbane suburb wherein a man in a suit once told me that I was “making the neighbourhood look bad” as I stood barefoot, belly-out, talking too loud on the phone at a bus stop.

The humour in All My Friends Are Racist comes from the series’ ability to lean into the absurd while remaining incredibly self-aware. It doesn’t take itself seriously, poking fun at both itself and its audience. This is best highlighted in the series’ third episode. In this episode, Belle becomes the Reconciliation Action Plan Officer at a law firm and is charged with decolonising the office. ‘Decolonising’—a word that simultaneously encompasses so much and means nothing at all—is repeated so often it becomes the butt of jokes. Later, in episode four, the use of buzzwords like these and their shallow usages are called out.

The series relies heavily on stereotypical portrayals, making the show feel tropey but never cliched. Belle’s boss is the archetype of a person who recently found out they have Indigenous ancestry but doesn’t put in the work to meaningfully engage Indigenous people or connect with community. Casey proclaims himself an emerging elder-in-residence at Belle’s new workplace, a tongue-in-cheek reference to overly-rehearsed, superficial Acknowledgements of Country. Belle gets a fashion montage in episode three where she tries to find the most Black Aunty-looking dress in an effort to make herself look more Aboriginal at work. As a fair-skinned blackfella, I felt both validated and called out by Narkle’s performance.

All My Friends Are Racist takes these character tropes to the extreme, to the point where several feel like caricatures. However, this is intentional on the writers’ part, and is used to highlight societal issues rather than disenfranchise an entire group of people. The girl who is way too into Japanese anime culture, crossing the line from cultural admiration to cultural appropriation. The woke bloke who tries too hard to be an ally and in an attempt to increase his social currency. The casual racist who sees her black friend or partner as an accessory rather than a fully autonomous person.

There is a familiarity in these tropes. We all know somebody like this. Maybe you see these people every so often at a local music gig or at a friend’s kid’s birthday party. Maybe you dated one or all three of these people (this is not me speaking from personal experience…) Maybe, like Casey and Belle, you’re still friends with them, even with how problematic they are. In a world where black tragedy is highly sought after, All My Friends Are Racist is light-hearted and chaotic.

Though the dialogue can sometimes feel clunky, like when a server at Belle’s mum’s art show calls Casey a slut in a Steven Oliver-esque tone, the series’ meaning and message transcends these moments of awkwardness. It tells Indigenous youth—especially queer youth—that it’s okay to be messy and make mistakes. And maybe, just maybe, that’s enough for me to forgive the writers for making me side with Young Liberal Luke.

Raelee Lancaster is an award-winning poet, writer and creative producer living in Brisbane. She has written for Cordite Poetry Review, Overland, The Saturday Paper and more. Raised on Awabakal land, she is descended from the Wiradjuri and Biripi peoples. She tweets @raeleelancaster