Paul Thomas Anderson’s latest film is shattering and spellbinding.
Sarah Ward
[This is archived content and may not display in the originally intended format.] 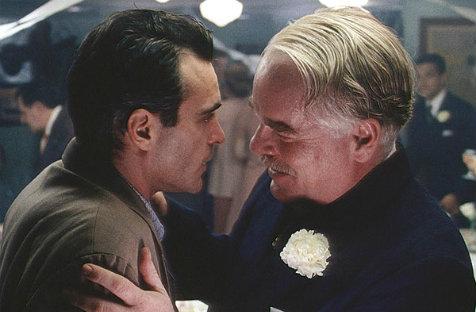 The rhythmic swirling of waves from the wash of a ship presents a surprisingly simple opening image for Paul Thomas Anderson’s The Master, but as the accomplished auteur has proven throughout the course of his six-feature career, the seemingly straightforward often has hidden depths. Just as the ocean ripples in the frame, so too does the film itself. Initially an apparently transparent story, further scrutiny reveals a heaving mass of chaos and complexity.

As evident in Anderson’s earlier efforts – with structural and thematic similarities to Boogie Nights and There Will Be Blood being the most pronounced – this dichotomy manifests not just in the substance beneath the striking, visually assured style, but in the director’s handling of character. In The Master, two opposing yet linked protagonists lead the way – each with flaws, failures and flashes of success that are utterly captivating and compelling.

Wayward after the conclusion of his World War II service, the drinking and drifting of able seaman (in body, if not in mind) Freddie Quell (Joaquin Phoenix, Two Lovers) leads to him becoming a stowaway on a passing luxury vessel. Upon discovery, Quell’s unwitting hosts warm to him instead of shunning him, but his presence unsettles the close-knit clan of family and followers who are single-mindedly pursuing their own belief system: ‘The Cause’.

Quell’s new pseudo-patriarch and leader prefers to be called ‘the Master’ by those in his thrall, however his given name is Lancaster Dodd (Phillip Seymour Hoffman, Moneyball). A commanding figure of significant influence – in his own estimation, at least – Dodd embraces his new companion despite their dissimilar backgrounds and personalities, just as Quell finds an uneasy comfort in his acceptance and guidance. Under the watchful eye of Dodd’s dutiful, disapproving wife Peggy (Amy Adams, On the Road) the men’s rocky relationship tests personal, physical and philosophical bounds.

Though much has been made of the man, material and movement that provided inspiration for The Master (science fiction writer and Scientology founder L. Ron Hubbard), Anderson is sensitive as well as scathing in his approach. Fictionalised flourishes may conceal elements of his true subject, and the film’s carefully-constructed, cryptic aura may bathe his scepticism in opacity, but a strong sense of questioning remains as Freddie Quell moves towards and away from the apparent enticement of greatness.

To say that The Master is an astounding intellectual achievement is to speak the obvious, praise also earned by its immense aesthetic impact – labyrinthine images (in the hands of Twixt cinematographer Mihai Malaimare Jr.) and unsettling score (from Radiohead guitarist and We Need to Talk About Kevin composer Jonny Greenwood) included. However, the brilliance inherent in the film’s easy insertion into Anderson’s considerable canon cannot be underestimated, with many moments in his preceding career (Hard Eight’s dalliance with addiction, Magnolia’s contemplation of faith, and Punch Drunk Love’s championing of emotional consumption) culminating in the feature’s density.

Exceptional performances provide the finishing touches, with both leading men in top form. Phoenix is astounding in his tortured physicality; twisted limbs, tense posture and twitching facial expressions encapsulating his character’s inner turmoil. Hoffman terrifies with his electrifying determination, all the while remaining relatable. Alongside Anderson’s efforts as the film’s guiding force, Phoenix and Hoffman provoke, puzzle and embody The Master’s shattering, spellbinding whole.