After so many years, it’s tempting to call Mad as Hell an institution, and its demise (in its current form at least) the end of an era.
Anthony Morris 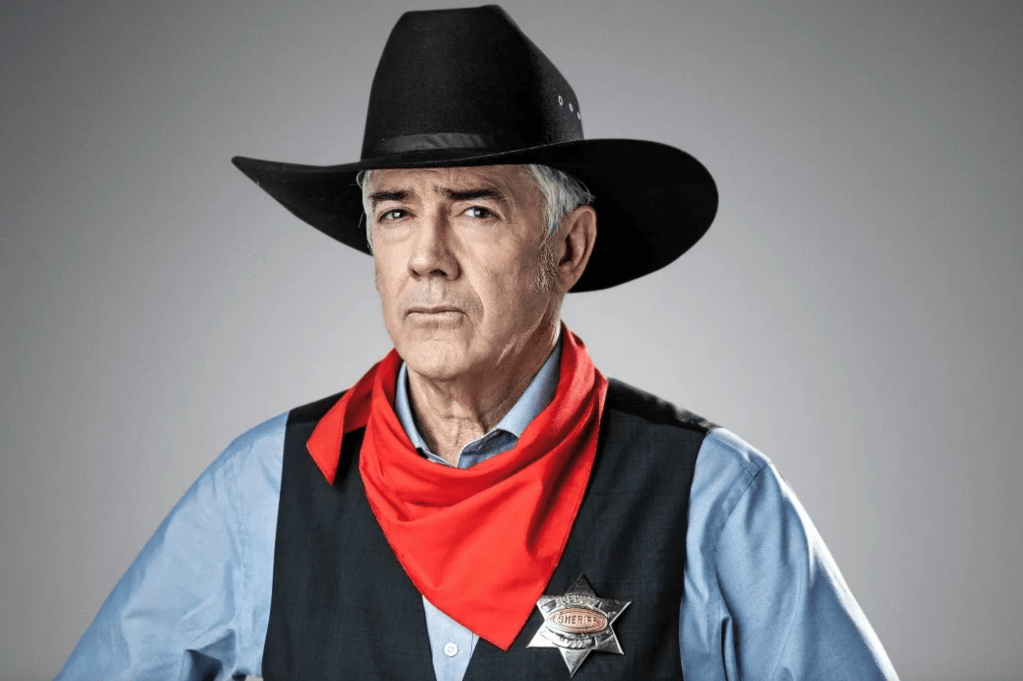 The sheriff is hanging up his Stetson … but why? Image: Mad as Hell/ ABC.

Where would Australian comedy be without Shaun Micallef? We won’t have long to find out. After ten years and 15 seasons, Micallef has announced that the current series of Mad as Hell will be his last, though there’s a possibility the show may continue without him.

Watching the first episode of season 15, it’s hard to see how. Despite a fairly generic format – it’s almost entirely jokes about the news, delivered either as fake news, commentary, or interviews with fictional characters hosted by Micallef sitting behind (well, inside) a desk – Mad as Hell is a show built around Micallef as a performer. Who else can on Australian television can get big laughs out of randomly lapping at a glass of water? Maybe Dave Hughes, but not for the right reasons.

This series sees Micallef and company forced, like the rest of Australia, to deal with a new federal government. No more easy laughs from dragging the pause out between ‘Prime Minister’ and ‘Scott Morrison’ just a tiny bit too long. Though having Peter Dutton as opposition leader means we still get Brion Pegmatite (Tosh Greenslade) to terrify the nation as he grimaces his way through a life devoid of ‘… pleasure’.

But even a new government – and the requirement to create a whole new cast of characters, including one intentional dud from series regular Stephen Hall – can’t slow Mad as Hell down. The series survived losing Bill Shorten’s zingers, it’ll survive this, and if the first episode is any guide the new subject matter has given things a new spark (and a new painting on the wall of ‘Sexy Albo’).

The big advantage this show has over just about everything else on Australian television is confidence. It’s a show made by people who know what they’re doing and have been left alone to get on with the job. As a result they’re taking risks (or just making jokes) we rarely see in Australia’s increasingly safe television landscape.

Partly that’s because Mad as Hell is the last gasp of a long Australian tradition of sketch comedy (Micallef’s own sketch career reaches back to the mid-90s and Full Frontal). Jokes at the ABC’s expense used to be par for the course on comedy series; these days Mad as Hell’s occasional but always barbed swipes at the ABC’s drama output seem radical simply because nobody else is doing it. And partly it’s because Mad as Hell is a show that isn’t afraid to put a twist on a sketch and take it to a place nobody saw coming.

The obvious joke with Pegmatite is that Dutton is a monster. The less obvious joke? Have Micallef pull out a violin and play (well, ‘play’; messing up basic set-ups is a core part of his comedy persona) while Pegmatite claws at the air trying to grab at the sounds like the Monster in Young Frankenstein.

Semi-obscure pop culture references have been part of Mad as Hell’s bag of tricks from the start (the Blade Runner references came thick and fast early on; there’s still the occasional glimpse of a chair with Tyrell Corp. stencilled on the back). They’ve had plenty of their own running jokes too. The jury’s out on exactly when ‘Release the Kraken’ wore out its welcome, but it’d be churlish to deny it one final return.

This first episode back saw the occasional misstep. A few of the Labor jokes were dated, though with a government only a few months in power there simply isn’t enough new material to work with. And the ABC’s ever-shrinking budgets have clearly had an effect (jokes about sold gold safes stuffed with vegetables aside). The days when Mad as Hell would feature a number of pre-recorded (or even live) sketches are over; a very funny special guest appearance from Tony Martin doing a Woody Allen impersonation will have to do.

After so many years, it’s tempting to call Mad as Hell an institution, and its demise (in its current form at least) the end of an era. But the ABC’s main comedy line-up is now mostly series just as old or older: The Weekly, Gruen – even Spicks & Specks is back in 2022 for a ten episode run. Micallef has said in interviews he wants to step aside and let a new generation come forward, and a new generation is something the ABC sorely needs.

It’s just a shame the best comedy on the ABC has to be the first one to go.

Shaun Micallef’s Mad as Hell is available on iView, and airs weekly on the ABC at 8.40pm Wednesdays.