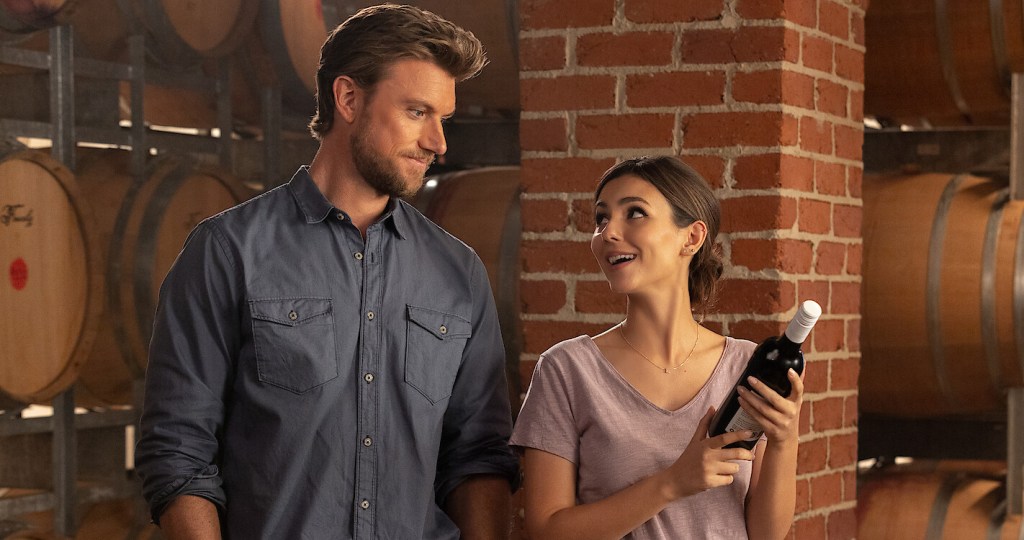 Wining and dining abound in A Perfect Pairing. Image: Netflix

Light comedies – and especially romantic comedies – stay very close to the type of daily gossip, chatter, anxieties and desires that fill social media: the ‘lifestyle’ issues that once were the sole province of glossy magazines. In the latest Netflix rom-com, A Perfect Pairing directed by Australian expatriate Stuart McDonald, a splendid selection of buzzwords zip by: ‘work-life balance’, ‘toxic workplace culture’, female best friends who are ‘work wives’, ‘added value’, ‘telling the story of your product’, ‘going the extra mile’ in business negotiations …

When did such matters of working conditions and business success infiltrate the rom-com genre? In some sense, they have never been absent: Hollywood classics including George Cukor’s Holiday (1938), Preston Sturges’ The Lady Eve (1941) and Howard Hawks’ His Girl Friday (1940) have always dealt with the working lives of their characters – or, at any rate, the money required to free one from an unsatisfying job and face life as an unfolding adventure.

By the 1950s, movies like Desk Set (1957) with Katharine Hepburn, or any number of Doris Day/ Rock Hudson vehicles tiding us over into the 1960s, explored, with some ambivalence, the opportunities for women entering the Mad Men-type industries opened up by technological growth and the explosion of consumer markets.

There can be no doubt, however, that, beginning around the moment of 9 to 5 (1980) – directed and co-written by another Aussie expat, Colin Higgins – work and business became defining, almost all-determining topics for relationship comedies. That covers a vast range of films, from Bette Midler and Lily Tomlin in Big Business (1988) to Sandra Hüller in Maren Ade’s Toni Erdmann (2016).

Lola (Victoria Justice) in A Perfect Pairing is someone who loves her work in Los Angeles, which involves selling wines to restaurant chains. In fact, she enters into a storytelling rhapsody at the first swill of a good brand, evoking its origin, its history, its destiny, as well as the places, times and feelings with which it can be associated. She’s a hard worker, regularly going above and beyond the strict call of duty – but the job is, to her, a source of immense pleasure and even creativity.

Does that sound like a fantasy to you, a Utopian wish? Welcome to the contemporary rom-com, which proudly traffics in dreamlike solutions to real, shared problems – as much popular art does.

It’s not all smooth sailing for Lola. She has a narcissistic power-baby of a boss, Calder (Craig Horner), who is a type – the type to avoid – straight out of a hundred current self-help manuals. An equally familiar figure is the nervy office gal-pal, Audra (Lucy Durack), who genuinely supports her best friend Lola until a sure-fire business opportunity necessitates an act of betrayal. Them’s the breaks in the modern workplace!

Going it alone – because this is also a fable of independence and small business start-ups – Lola grabs the opportunity to fly to Queensland and fight for the chance to represent the wines produced by Hazel Vaughn (Samantha Cain), a tough and very wealthy lady who happens to be hanging out on her down-home sheep farm. To impress Hazel, Lola will have to roll up her sleeves and become an earthy, no-nonsense ‘jillaroo’ of all trades.

So where is the rom in this com? As a 21st century working girl, we are told, Lola hasn’t had great success in love, and frankly isn’t devoting much time or energy to it anymore; business acumen is more important to her. Australia is set to change this situation. The first gag in the this section of the film, among its best, shows Lola’s instant hots for the first splendid Aussie male who greets her as she emerges from a cab – a guy who instantly reveals himself to be, literally, a fall-down drunkard.

Lola has a better chance at romance, one safely assumes, with the pragmatic, laconic but deeply sensitive farm manager, Max (Adam Demos) – especially when he gets his shirt off in the course of a hard day’s work. (Demos, it should be noted, also featured in a broadly similar rom-com project from the same producer-and-writers team, Falling Inn Love [2019] – that one was shot in New Zealand.)

Max, however, has a secretive side, and some mysterious emotional wounds. To go any further into plot matters (tightly scripted by Elizabeth Hackett and Hilary Galanoy) would spoil the twists that are in store as part of this set-up.

But there’s a lot here to embroider the basic storyline, and McDonald keeps it all ticking over briskly (montage sequences proliferate!). Although the ‘naïve foreigner in a sheep station’ premise uses all the in-built gags that have been in filmic circulation since at least Fred Zinnemann’s The Sundowners (1960), and the habitual linguistic-cultural misunderstandings arise (Lola wonders what an ‘arvo’ is), there are also plenty of intriguing ‘new world’ touches.

Gone is the mainly male, straight, white-Australian image we recall from Sunday Too Far Away (1975) and its ilk; this is a relaxed rural community that welcomes lesbian and indigenous workers. An Aussie Utopia, indeed!

Every romantic comedy depends on the hard-to-pinpoint but palpable chemistry – or lack thereof – between the lead players. This film scores pretty well on that front. Justice takes on the burden of the performance duty, since she inhabits not only the love plot, but also the Los Angeles plot and the cute ‘solitary relating to animals’ scenes. Demos is more constrained, since his ‘strong and silent’ type also has to be kept away from the camera, at crucial points, for the narrative mechanics to function smoothly.

Nonetheless, once the beers flows and the proximity-clinches kick in, Lola and Max make for an appealing couple-in-the-making. (Lola’s Dad [Antonio Alvarez], on the other hand, looks like he should be her brother.)

In its emphasis on landscape and physical labour, A Perfect Pairing brings a welcome touch of the outdoorsy, Romancing the Stone (1984) strain of rom-com to the usual urban settings of the genre – and Ben Nott’s luminous cinematography rises to the occasion. But it is not a project that relies on any old-fashioned appeal to ‘primitive’ ways of life in the outback; present and accounted for on this farm are internet communications, nocturnal sing-alongs to groovy pop tracks, and even a move to ‘eco-friendly’ practices.

My ears pricked up at the mention, early on in the story, of a wine-making ‘all-women collective in Uruguay’ on which Lola has her eye. Thirty, or even ten, years ago, this would have been, in almost any Australian film or TV comedy, a throwaway joke at the expense of some supposedly trendy fad deemed ‘politically correct’ and therefore a pretentious wank. Not so here. This Latin American female collective constitutes a minor, unseen but significant thread woven through the narrative, and it is granted maximum positivity. That impressed me.

Stuart McDonald is a filmmaker whose career I have followed since his early ‘90s shorts (Mr. Electric starring Ernie Dingo), through noted Australian TV series (including The Secret Life of Us and Summer Heights High), and into high-profile USA TV work – especially 12 episodes of the sublime Rachel Bloom cult-phenomenon, Crazy Ex-Girlfriend (2015-2019). Most recently, he has been making an interactive TV rom-com (again for Netflix) titled Choose Love.

I am restraining myself from ending on any ‘McDonald had a farm’ pun – but I do recommend A Perfect Pairing as colourful entertainment.

A Perfect Pairing is available on Netflix from 19 May.

Brian McKenzie is one of the great, unsung auteurs of Australian cinema, across both documentary and fiction. At first glance, this quiet, whimsical portrayal of ordinary suburban eccentrics (played superbly by Julie Forsyth and Paul Chubb) may seem scarcely progressive on any level. By the end, however, the film achieves a rare pathos and depth.

Pip Karmel’s lively Me Myself I was promoted on its release as ‘a romantic comedy about oneself’ – a strange, intriguing, thoroughly modern concept, and one that turned out to be prescient about the ‘self esteem’ trend in popular psychology, cinema and TV. Rachel Griffiths shines in this fable of imagined possible destinies.

This little-known, low-budget, debut feature by the team of Mischa Baka & Siobhan Jackson is a gem. It plumbs the darker, ‘Mumblecore’ side of the rom-com genre, exploring states of loneliness, awkwardness, inequality and miscommunication in emotional and sexual relationships. The final scene is really something.