Hopes were high after the TV adaptation of Rooney's bestseller Normal People ... So how does the adaptation of her first novel stand up?
Anthony Morris 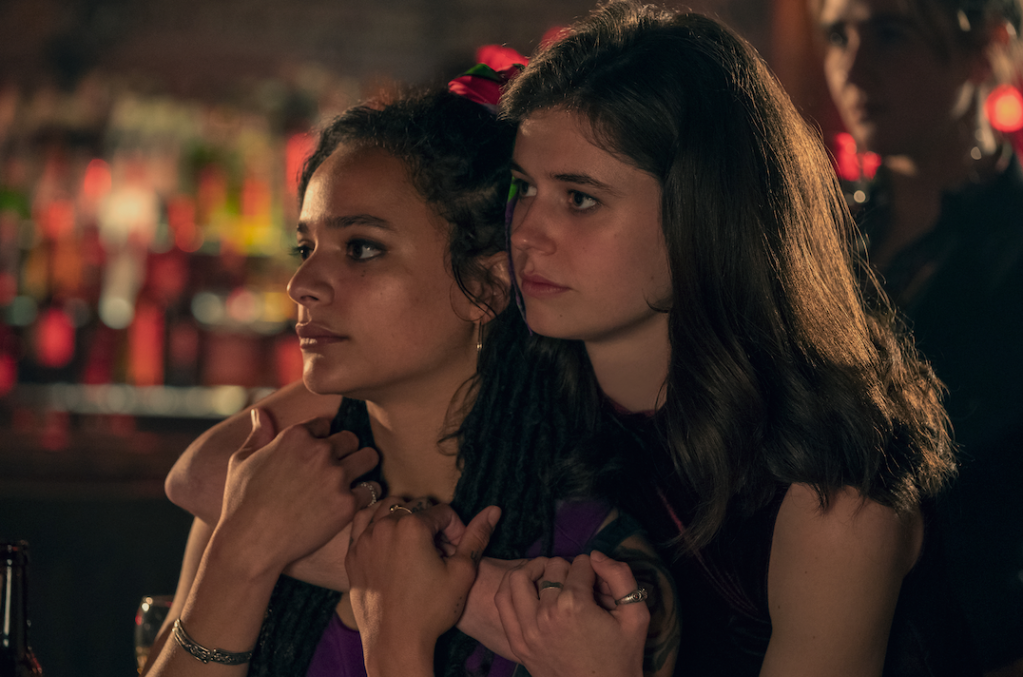 Conversations With Friends is both more and less claustrophobic than Normal People. Image: Stan.

The 2020 BBC/Hulu adaptation of Sally Rooney’s novel Normal People (available in Australia on Stan) wasn’t so much a surprise hit as a seemingly inevitable confirmation that the young Irish author had her finger on the pulse of something vital in the culture. It didn’t hurt that Normal People – built around the on-off relationship between a couple as they passed through their teens and early twenties – had in leads Paul Mescal and Daisy Edgar-Jones, one of the more powerful examples on on-screen chemistry this century.

Based on Rooney’s first novel, Conversations With Friends isn’t Normal People 2, though it’s easy to get the impression that many (including the producers) would like it to be. Both director Lenny Abrahamson and writer Alice Birch have been carried over from the earlier Rooney adaptation, and the soft, slightly chilly tone (even with the characters on holiday in Croatia) and unhurried pace of the earlier series lingers here.

The initial set-up isn’t too far removed either. Introverted Irish university student Frances (Alison Oliver) is joined at the hip to her extroverted best friend and former lover Bobbi (Sasha Lane). Together they perform live poetry; Frances writes the verses, but doesn’t allow them to be published, preferring to keep things ephemeral.

Their act attracts the attention of successful older author Melissa (Jemima Kirke), who is married to the vaguely Hemsworth-ish actor Nick (Joe Alwyn). Bobbi and Melissa strike up a lightly flirty relationship; the bond that develops between Frances and Nick runs somewhat deeper.

Conversations With Friends is both more and less claustrophobic than Normal People. The earlier series was about two people who were each other’s world, even when they were hundreds of kilometres apart. Here things feel a little more open, if only because Frances has both a secret lover and a best friend.

(Unlike in the novel, here Bobbi is a US import, which suits her character’s brashness; the first episode has a line about the general whiteness of Ireland, which was a minor point of online contention with Normal People).

But this is also more clearly Frances’ story. She’s in just about every scene – much of the series is just about her moving through the world. Her complex family life – her father is a crumbling alcoholic who provides her with financial support – looms in the background, along with some early hints that her body is planning to throw an obstacle or two in her path.

The sex scenes feel honest in their passion and their fumbling, even as the relationships seem (intentionally) less essential. Frances is clearly self-absorbed; how much of that is youth and how much of that is character is a growing question. Early on at least, she’s driven by want rather than need. Her moves on Nick are almost amorally direct, the work of a young woman who – perhaps for the first time (it’s definitely her first time with a man) – knows what she wants and takes it.

That said, fans of emotionally inarticulate people who clearly want each other but don’t know how to say it and so continue to say the wrong thing or nothing at all will find plenty of agonising pauses and clumsy moments to enjoy. Bobbi and Melissa are extroverts who (for the most part) are in touch with their feelings, and the series is barely interested in them early on. Isolated introverts – who somehow are also both comfortable performing on stage – is where the action is.

Everyone in the universally strong cast does well at making sometimes unlikable characters seem justified and whole, but it’s Oliver, making her screen debut here, who has to carry the series. She’s playing a character for whom almost everything takes place behind a front. A false note and the whole series would crumble; she doesn’t put a foot wrong.

There’s a scene early on where Bobbi casually confesses to Frances that she kissed Melissa at a party; Frances left early, overwhelmed by her own secret kiss with Nick. The camera lingers on her face as she fails to make her own confession in return; she doesn’t want to share the moment, doesn’t want to brush it off. It’s real and it’s hers and she wants to keep it.

Conversations with Friends is maybe a little too slow at times, especially for viewers who want to get to the bumpy stage of the love rectangle. It’s as much about someone growing into adulthood, where your relationship with someone else stops being just part of a high school clique or a circle of friends and is yours and yours alone. Finding someone is also tearing away from everyone else.

Find the wrong person and you’re on your own.