Lunana, A Yak in the Classroom review: a timeless tale in Bhutan

Lunana showcases beautiful Bhutanese culture while taking cues from The Sound of Music – and discovering what it really means to be happy.
Silvi Vann-Wall 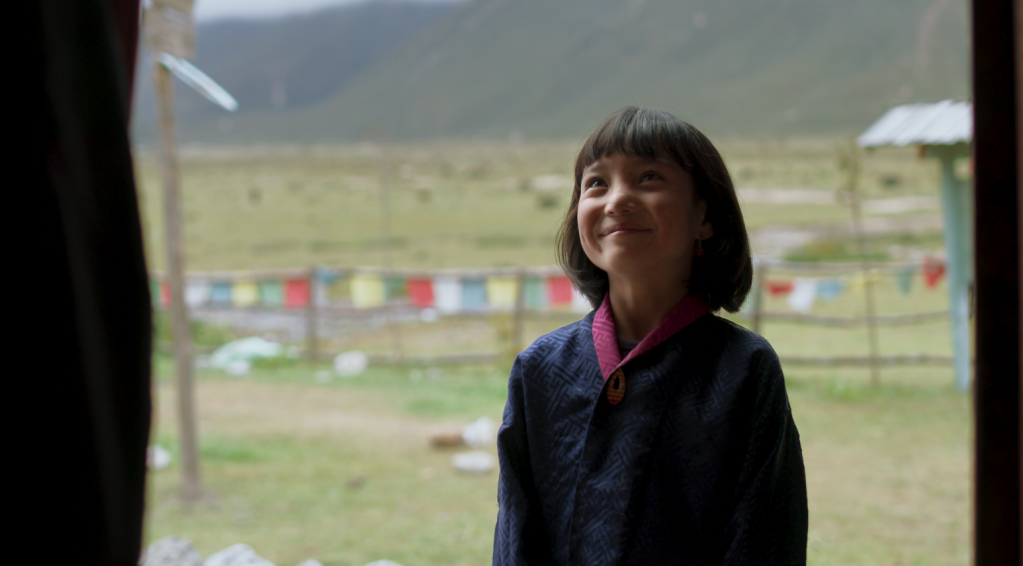 The landlocked South Asian country of Bhutan was once consistently ranked as the happiest country in the world.

In 1972, their then-King introduced the idea – or perhaps more of a slogan – of ‘Gross National Happiness’, an index to measure the country’s overall wellbeing. Also known as GNH, the concept promotes a holistic way of life, and attempts to give equal importance to the non-economic aspects of society.

But in recent years, according to UN reports at least, the country’s happiness has ranked in the high 90s, and now Scandinavia tops the list.

Lunana: A Yak in the Classroom, the debut feature from Bhutanese director Pawo Choyning Dorji, opens with Ugyen Dorji, its lead character, pondering what it really means to be happy.

Clad in a ‘Gross National Happiness’ shirt, Ugyen holds a crumpled tourism pamphlet for Australia – the place he dreams of escaping to so he can pursue a singing career. Fed up with being a government-allocated school teacher, Ugyen plans to migrate to ‘Aussie Land’ and leave everything Bhutan behind.

I naturally found it a bit amusing that a man who lives in a country as beautiful and friendly as Bhutan wants to move to Sydney, where he will no doubt face endless competition in the arts sector and a long and gruelling visa process. But there’s little time given to think about that, as his plans are stifled when the government instead assigns him to a year of teaching in the remote village of Lunana.

Located high up in the Himalayas, Lunana is an eight day journey from his metropolitan hometown. A bus will take visitors some of the way, but then they have to walk – and walk, and walk, and walk. Ugyen, stuck in his Western-idealising, city-living ways, is exhausted and exasperated.

As he meets Michen, the guide who will take him up the mountain, he barely takes a second to know him before putting his iPod back on and escaping into pop music world. Then, as he texts his friend that he is about to lose reception, the tapping of the buttons is emphasised at full-volume, annoying us as viewers as much as it annoys his guide.

There is a clear theme here: the disconnect between metropolitan Bhutan as an increasingly modern, globalised society, versus ‘the good old ways’ of traditional Bhutan. Ugyen has been ripped from the comforts of his bustling city, where citizens speak a mix of Dzongkha (the native tongue) and English, and propelled into the old world, where electricity and toilet paper are luxuries. Will our protagonist return to his roots and learn something fundamental about life in this fish-out-of-water journey? You bet he will.

The scenes where Ugyen is walking with his guide are some of the most beautifully shot in the film. Accompanied by three donkeys with packs on their backs and bells around their necks, the sequence evokes imagery of a religious pilgrimage. The sound design is absolutely stunning too.

When Ugyen finally takes off his headphones (because his iPod has died), a sense of great relief is felt as he finally takes in the lush greenery of the trees, the enchanting mists, and the ethereal sound of bells chiming mixed with birdsong.

Despite Ugyen being taken away from his singing career, music does play an enormous role in Lunana. The first of the film’s key musical moments comes when the two guides (they picked up a second one as the journey got more treacherous) sit around the campfire and sing a Bhutanese folk song called ‘Yak Legpai Lhadhar’.

The song recounts the tale of a yak named Lhadhar, who was slaughtered for a village ritual which brought great sorrow to his owner. The yak promises that his spirit will come back to his owner, in this life or the next. This moment is the first time Ugyen truly listens to and appreciates the lessons of his guides.

The film gets elevated, both literally and figuratively, once Ugyen and the guides arrive at the town of Lunana. The majority of the film’s shoot was done here in the remote village, relying only on solar power. The village’s real-life inhabitants make up the rest of the cast, with the notable stand-outs being Pem Zam, the school’s nine-year old class captain, and Saldon, a yak farmer and singer. And then of course there’s Norbu – the titular yak in the classroom (also in his on-screen debut).

The mountain scenery of Lunana rivals that of Lord of the Rings, in that it is so breathtaking and otherwordly that you can’t help but stare open-mouthed at it. But still, the gorgeous landscape and fresh mountain air isn’t enough to satisfy poor Ugyen. He complains about the lack of power and toiletries, and after a fretful sleep is late to his first day of teaching.

It is then that the combination of a cute class of kids (one of whom wants to be a teacher like Ugyen, because ‘they make the future’), and an encounter with village songstress Saldon, break through Ugyen’s delusion and help him see the potential of Lunana and his presence in it. Cue the cast’s Sound of Music moment, as Ugyen busts out his guitar and teaches the children the power of song – including an acoustic rendition of Yak Legpai Lhadhar, which is basically Ugyen’s leitmotif.

When Saldon catches Ugyen treacherously hiking out to collect yak dung to start his fire (‘burning paper is like burning money in Lunana’), she kindly moves Norbu the yak into the classroom so that he may collect his ‘jewels’ whenever he likes. The action prompts the leader of the village to muse that Ugyen must have been a yak herder in his past life – or perhaps even a yak.

The symbolism of the yak carries the film through its final act. As the seasons change, Ugyen realises he must soon leave Lunana or he will become snowed in. Saldon explains the meaning of the yak song to him, about necessary sacrifice, and it becomes clear he is conflicted about going to Australia after all. Will he really be happy there?

It’s also a touching meditation on Bhutanese culture, and what truly encompasses ‘Gross National Happiness’. For some, it’s a concept to be found elsewhere – for others, it’s simply an endless supply of yak dung.

Lunana, A Yak in the Classroom is in select cinemas nationally from 2 June.