Backbone is a noir obsessed with change, transformation, and looking inward and out in equal measure.
Nicholas Kennedy 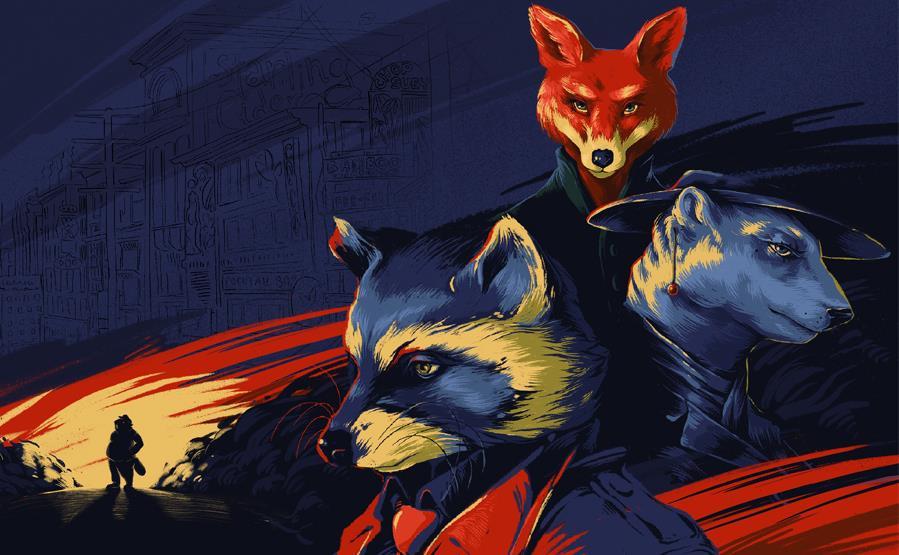 Noir is a sneaky genre. With its moody lighting and pained internal monologues, it’ll convince you that it’s obsessed with femme fatales and dutch angles, but its true obsession lies in corrupted worlds and the broken people resigned to them; their foibles, and the choices they regret. Noir seeks to make the human psyche sweat it out in a poorly lit interrogation room, and if the psyche happens to find its home within an anthropomorphic racoon man, all the better.

Backbone is a neo-noir crime story in the vein of classic point and click adventure games. Centring on private investigator (and racoon man) Howard Lotor, Backbone renders its setting of Vancouver, BC in a level of stunning pixelated artistry far better than the damned city – at least as it appears in this game – deserves. It only takes a turn into the nearest alleyway to see the blood leaching out of the pavement, staining the bottom of your shoes.

The opening of the game finds you tracking down proof of infidelity; sad stuff, but not openly suggestive of the abject horror you find in the basement of The Bite, the primary front of Vancouver’s top crime boss and your mark’s last known location. Bodies, flesh, and a bloodied blade that stretches all the way to the highest echelons of Vancouver society. So far, so noir; right? However, Backbone deftly weaves together its broader implied world, subtle clues and the classic noir belief that you are not entitled to all the answers to present a narrative corkboard with thread stretching everywhere from bigotry and fascism to ego-death and consciousness.

Like 2019’s Disco Elysium – from which Backbone also draws its presentation of dialogue as a scrolling feed – the boots-on-the-ground detective work here is a piece of a larger puzzle which looks inward and outward in equal measure. Howard engages in the drudgery of everyday detective work in the opening hours, and as the story progresses and events move into the realms of science fiction and horror, the game conspires at times to split his subconscious, resulting in even more Disco Elysium-esque internal monologues on the nature of existence, both primordial and futuristic. It’s heady stuff, and the beating heart of what makes Backbone so interesting.

You can tell a lot by the way a story with anthropomorphic animals organises its world. In many stratas, animals mill together and associate freely, leaving Backbone’s city streets feeling like they’re trying to communicate a degree of colour blind egalitarianism. But when you start setting foot in places of power and exclusivity, the divides show starkly. In this world, apes sit atop all else in political and business positions alike, to the point where Howard remarks it having been years since the last time he even saw one, so isolated and protected they are. Bookstores are obliged to carry ape-state-approved propaganda, and the predator-prey dynamic of the wild is translated as inter-species oppression and marginalisation, a power structure that is systemic and subtle in the same ways we can see in reality, making it effective and unnerving.

Casting your characters as animals is a neat storytelling device that is especially suited to noir, as characters wear their personalities on their sleeve, making it all the easier to pick out Renee the fox as a sly investigative reporter, or Clarissa the polar bear as an elegant, vicious crime boss. In the same vein, Howard is the quintessential noir protagonist. He sorts through the discarded scraps and detritus of the world; a career path serving as a perfect Venn diagram of racoon/noir energy. Different dialogue choices let you choose the particulars of Howard’s temperament, and while – at his core – he’s no fool, he’s fool enough to find himself in the wrong place at the wrong time; fool enough to keep pulling on a thread without truly considering what it is he could be unravelling.

You’ll sneak through smoggy factory floors and pick through the bedrooms of vanished girls; their mothers sobbing in the living room. There’s grief and wickedness in equal measure; everyone’s got a theory and some are completely consumed by them. For all its smoke-filled jazz bars and nefarious political hierarchies, there’s a lot of writing and inspiration here beyond noir-inspired dialogue and key story beats, and it sees the game grow beyond mere genre-tropes and political conspiracy into something entirely more scientifically existential, empathetic, and completely unexpected. Developers EggNut have certainly made a gorgeous world to plumb the depths of, and they’re more than happy to shift and change your perspective on that world. The final wrong place Howard finds himself in transforms his sense of being completely; this is Backbone’s bravest narrative choice.

The narrative flourishes of Backbone are wildly ambitious, and the tonal shifts will butt up hard against expectations set by the opening hours’ clear love for noir-narrative and tropes. It’s a game obsessed with change and transformation, and in a world as damned as this, perhaps that’s the best one can hope for.

A copy of Backbone was provided by the publisher.