Peter Rabbit 2 wanders further from its charming source material and is an intermittently unpleasant franchise film about the unpleasantness of franchise storytelling.
Mel Campbell 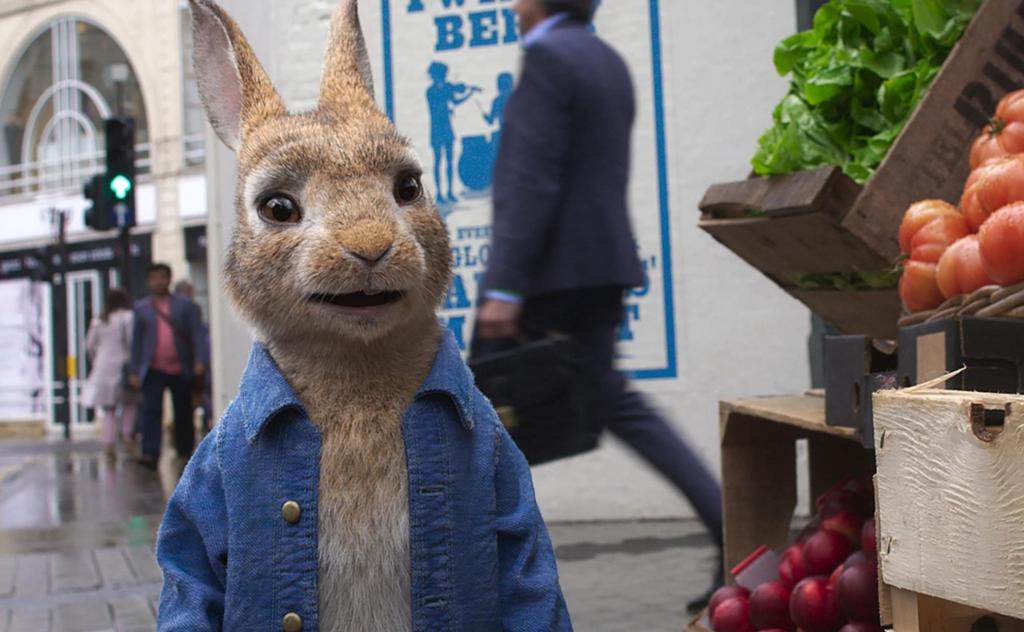 Confused but soft as ever, thanks to the work of Animal Logic. Image courtesy of Sony Pictures.

Peter Rabbit is an odd beast – by which I mean this film series. As ScreenHub’s David Tiley observed of the 2018 CG-animated film, Peter is a cross-cultural hybrid: it’s a beloved English story set in England, filmed in Australia and realised by Australian animation studio Animal Logic; but its writers and director are American.

This sequel was originally slated for release a year ago, but now hits Australian cinemas just in time for the Easter holidays. And it grapples clumsily with the very idea of itself – as a deeply personal, eccentric story world at risk of being rendered fake and bland by commercial imperatives; as a nostalgically English property within a modern, multicultural world; and as a riposte to the criticisms made of its predecessor.

The 2018 film was widely compared to Paddington, which sets up extremely high expectations for this sequel; Paddington 2 is a near-perfect film, a modern classic. Peter Rabbit was more like Babe, in that it was a hyperreal rural fantasy filmed in Australia – but it lacked the groundedness that George Miller created through a seamless combination of CGI, puppetry and real animals. And James Corden’s cocky voice performance in the title role divided critics; I was relieved to find him less obnoxious than I’d been expecting.

Writer–director Will Gluck always seemed embarrassed about the old-fashioned whimsy of his source material, often ridiculing “this kind of story”, and instead favouring crass slapstick and tongue-in-cheek musical montages. This sequel doubles down on such tactics, seeming even more ill at ease with its place within the rigidly managed regimes of contemporary cross-media IP management.

Read More: The scale of Peter Rabbit’s success, with some encouraging charts

Beatrix Potter struggled with branding, too. In 1906, asked to write new stories specifically for very young children, she came up with The Story of a Fierce Bad Rabbit, following feedback from her publisher’s daughter that Peter Rabbit wasn’t wicked enough. But the tale was too moralising, and her nameless ‘bad rabbit’ offputtingly aggressive.

Similarly, this film forces its rabbit characters into unappealing stock roles: Peter’s levelheaded cousin Benjamin (Colin Moody) becomes “the wise one”; Flopsy (Margot Robbie) and Mopsy (Elizabeth Debicki) are yoked together as a duo; Cottontail (Aimee Horne, replacing Daisy Ridley) is a hyperactive oddball. It’s wearying that the film winks at this stuff while also unironically indulging in it.

Rather than tell Potter’s witty “tales”, Gluck and his co-writer Patrick Burleigh have inserted her characters into an invented frame-story in which whimsical illustrator Bea (Rose Byrne), having fallen for her uptight neighbour Thomas McGregor (Domnhall Gleeson) despite Peter’s best efforts, is being courted by Nigel Basil-Jones (David Oyelowo), a big-shot publisher who has ambitious plans for Bea’s stories. This leaves Thomas, a mere provincial toyshop owner and hobby farmer, feeling emasculated.

As the film begins, Peter still fantasises about violently disrupting Bea’s and Thomas’s wedding. He smugly soaks up his local fame as the naughty hero of Bea’s popular self-published storybook, but resents his lingering ‘bad rabbit’ reputation, which Nigel is keen to turn into an edgy brand.

In his disillusionment, Peter is a prime mark for wily Barnabas (Lennie James), who calls himself a “fierce bad rabbit”. Introducing himself on the streets of Gloucester as a friend of Peter’s deceased father, he recruits Peter, Fagin-style, to his crime crew: the devious rat Samuel Whiskers (Rupert Degas), Tom Kitten (Damon Herriman) and his mean sister Mittens (Hayley Atwell).

This part of the story is genuinely delightful, because Gluck finds a recognisably British film idiom that works – the ‘geezer caper’ popularised by Guy Ritchie and Matthew Vaughn. I loved this G-rated riff on the genre’s tropes – the rapid-fire dialogue, the freeze-frame character introductions, the fondness for digressive flashbacks, and the clever tricks the gang uses to steal food from suburban kitchens. Their big plan to rob a farmer’s market of its dried fruit stall is funny because, to these animal characters, it’s a score as huge as any bank heist. And it enables lots of sly jokes at the expense of bourgeois luvvies who shop at farmers’ markets.

‘…the whole notion that these rabbits are the human characters’ “children” is uncanny and grotesque, and utterly against the grain of Potter’s stories.’

By contrast, the human-focused storyline grinds to a halt as Bea, Thomas and Nigel argue metatextually about what should please the audience, and whether commercial success will ruin both Bea and her tales. And the plotline in which Peter fears being replaced in Bea and Thomas’s affections by a future human baby feels like a sop to the American market; indeed, the whole notion that these rabbits are the human characters’ ‘children’ is uncanny and grotesque, and utterly against the grain of Potter’s stories.

As ever, the craft is top-notch. Thanks to Animal Logic, the rabbits and their other animal friends are beautifully rendered, with expressive faces and soft fur you want to pat – although the CGI used on Thomas is offputtingly rubbery. I also enjoyed the floaty chiffon frocks in which costume designer Lizzy Gardiner dresses Bea, and the luxe touches production designer Roger Ford brings to Nigel’s world, like an intimidatingly fancy office, and a first-class train carriage to make Agatha Christie cry with jealousy.

But despite tying itself in knots over what kind of film it is – or perhaps because it does – Peter Rabbit 2 wanders further from its charming source material. Instead, it’s an intermittently unpleasant franchise film about the unpleasantness of franchise storytelling.