Australian director Claire McCarthy restores agency to the tragic heroine in this campy yet gorgeous adaptation, writes Mel Campbell.
Mel Campbell
[This is archived content and may not display in the originally intended format.] 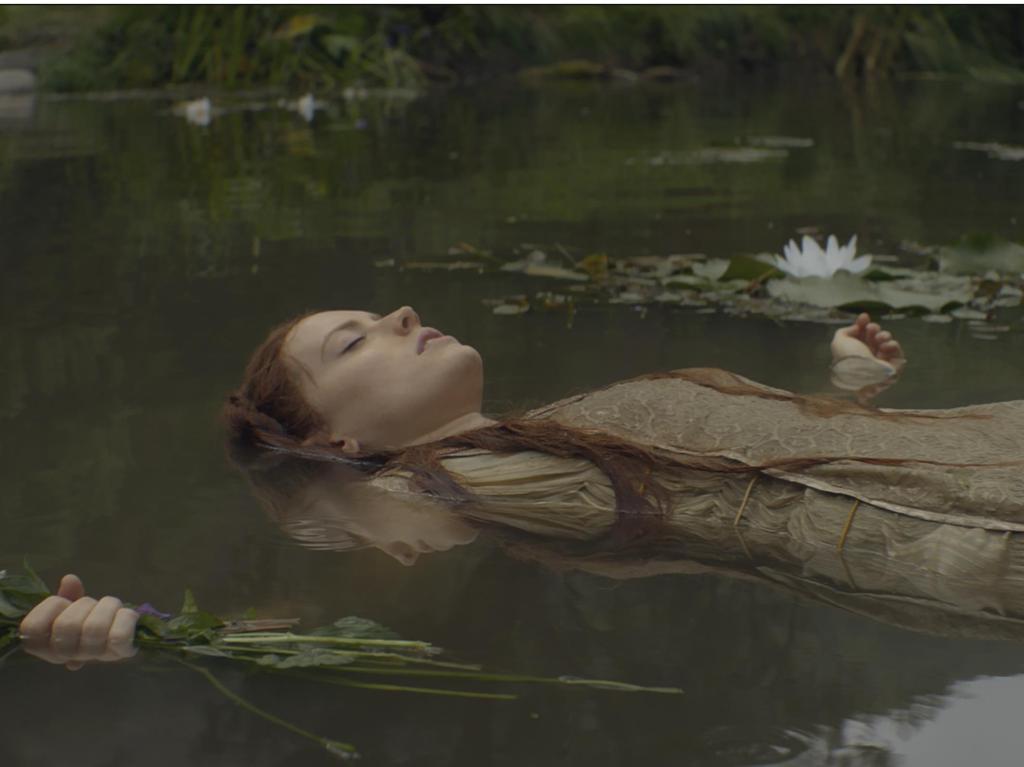 The premise is seductive: Hamlet, told from Ophelia’s point of view. The character has been known to generations of readers and theatre-goers as a kind of Manic Pixie Drown Girl: a tragic, peripheral figure undone by her own gendered weakness, and who mainly serves to illuminate and motivate the play’s male characters. But girls to the front!!

Australian director Claire McCarthy (The Waiting City) has taken and run with the clear light and botanical motifs of Pre-Raphaelite painter John Everett Millais’ Ophelia (1851–2). The film opens on a shot of Ophelia (Daisy Ridley) floating on her back in Millais’ famous, almost ecstatic pose, a bunch of flowers gripped in her right hand.

“You may think you know my story,” she begins in voiceover. “Many have told it.” Truth be told, I laughed at this point, wondering if we’d be getting the Guy Ritchie version of Shakespeare.

But the craft of this film is gorgeous, beguiling the eye in a contemporary, feminine way. It’s Victorian romanticism filtered via Instagrammable freshness, with Tumblr’s acuity for amplifying emotionally saturated moments. It has a swooning nostalgia for chivalric pomp and tragedy, a symbolic sense for colours and flowers, and so many diaphanous veils, glinting, jewel-studded coronets, and gowns with trains and hanging sleeves. There are also festival-worthy floral crowns, glowing ambient light, and performatively wistful gazes. Elsinore Castle has more indoor plants than a Design Files home tour, plus a white peacock strutting along the corridors, just cos.

And there’s wordplay. Screenwriter Semi Chellas co-wrote one of Mad Men’s most pointed commentaries on gender politics, and is currently working on Elizabeth Banks’ reboot of Charlie’s Angels. Here, adapting a young-adult novel by Lisa Klein, she seeks – and mostly finds – a sweet spot between Shakespeare’s riffs and riddles and the way people naturally speak.

As a tomboyish child, Ophelia (Mia Quiney) boldly speaks up at court, leading her embarrassed widower father, Polonius (Dominic Mafham), to apologise for not having socialised his treasured daughter: “This is ladies’ work, to polish such a treasure. And alas, I am no lady.”

“I may be a lass,” retorts the child, “but there is no call for such lassing. I would not want to be a lad.”

Tickled by this pert pun – and bereft that her darling son Hamlet is heading off to university – Gertrude takes on Ophelia as one of her ladies-in-waiting. Though Ophelia is as smart as her educated brother Laertes (Tom Felton, in a welcome break from surly typecasting), among the queen’s aristocratic circle, always clad in gorgeous aquatic shades of turquoise, she’s a fish out of water.

But she’s in her element when grown-up Hamlet (George MacKay) and his best friend Horatio (Devon Terrell) stumble upon her, bathing. In another enjoyable exchange of banter, Ophelia and Hamlet proceed to take the piscine. Ridley’s vivid performance resists the temptation of wistful feyness; her Ophelia is alert and straight-talking.

Meanwhile, MacKay’s casting is intertextually delightful; because he’s already played wide-eyed nature boys in How I Live Now and Captain Fantastic, we sense that Hamlet and Ophelia belong together in nature as they cannot in culture. Their love is portrayed as something free and sincere that slides away secretly like a fish, and is doomed to die gasping.

But Ophelia herself is not. She watches, she notices, she learns and realises. Some films make much ado of their plot mechanics; and it would have been easy for this film to pander to audiences’ familiarity with Hamlet, exploiting dramatic irony to make us feel smarter than the characters. But Chellas and McCarthy insist on Ophelia’s subjectivity: it’s her perspective and her actions that impel the story onwards. And because of this, the film specifically makes non-male viewers feel smart.

However, anyone familiar with Shakespeare’s broader oeuvre should have fun noticing the Bard’s famous motifs throughout Ophelia: twins separated and reunited; potions that simulate death; plays-within-plays; girls dressing as boys.

Naomi Watts enlivens the role of Gertrude with longing: she’s a lonely woman who seems to feel a wild part of her is missing, and so is drawn to Ophelia’s free spirit. Clive Owen, however, disappoints with a one-note take on the villainous Claudius. Rather than turning on his charm to show why Gertrude might have fallen for her brother-in-law, he mugs his way between scheming and fulminating.

Of course, it doesn’t help that he’s saddled with one of the worst wigs I’ve ever seen onscreen. It looks like they found it in an attic; it looks like Bill Murray’s in Zombieland. Clearly Ridley and Watts gobbled up all the film’s wig budget.

Perhaps with time, Ophelia will reveal itself as this generation’s Robin Hood: Prince of Thieves: lovingly crafted medieval pulp that speaks most eloquently to teenagers, and is enjoyed as high camp by everyone else.