This thinly disguised art biopic works directly against the complex ideas of its subject, says Adrian Martin.
Adrian Martin
[This is archived content and may not display in the originally intended format.] 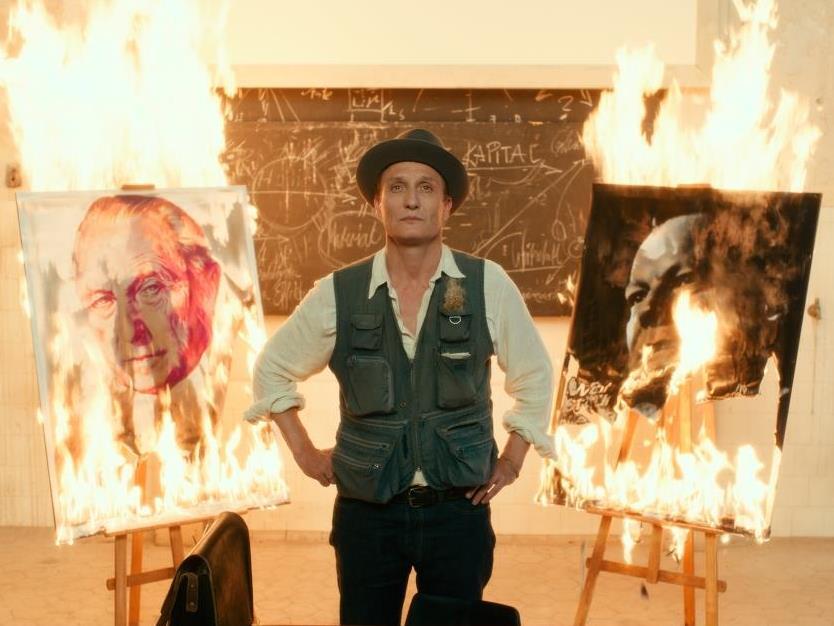 I have often wondered what a non-sentimental biopic of Andy Warhol – directed, perhaps, by Gus Van Sant – would look like. By non-sentimental, I mean a film that would seriously endeavour to honour the ideas animating Warhol’s work in all art forms and media – rather than simply taking that work as a very personal expression of what some regard as his sad, lonely, shut-in existence.

This is, after all, the easiest and most reassuring option: rather than trying to deal with the material actuality of his art, any biographer can read Warhol’s various paintings, prints, Polaroids and movies as direct reflections of his supposedly “alienated” self. That’s a way of putting Warhol on the same level of every “average”, prospective filmgoer – maybe even below their level. Poor Andy, look at that miserable guy – he was even shot by a disgruntled hanger-on at his fortress-like Factory!

Virtually every screen depiction of Warhol that I’ve seen – including The Doors (1991), Basquiat (1996), I Shot Andy Warhol (1996) and Factory Girl (2006) – adheres to this properly “romantic” conception of the artist. Even as Warhol himself was no kind of floridly expressive romantic – which, in this context, refers to the old-fashioned idea that art always flows, more or less directly, from the emotions and experiences of the person who makes it. Australian cinema has recently given us a “grunge” version of this romantic viewpoint in Acute Misfortune, covering the last years of the Archibald-winning Adam Cullen – the period in which this artist is definitely on the skids and not producing his best work, but all the same manages to mirror his dark soul in every word, image and deed.

What’s missing from the sentimental, romantic biopics of artists is any reckoning with the intellectual or conceptual aspects of art – especially modern art. This challenge – virtually untouched by mainstream cinema in any country – is what drew me to check out the German film by Florian Henckel von Donnersmack, Never Look Away. It is a thinly disguised biopic of the great (and complex) German painter, Gerhard Richter (born 1932) – concentrating on his childhood and early adult years, and culminating in his first successful exhibition. That choice of focus is already a good clue as to the film’s true intentions.

So Gerhard Richter here becomes Kurt Barnert (played as an adult by Tom Schilling, and as a child by Cai Cohrs)  – and the teacher who had the biggest influence on him at the famed Düsseldorf Art Academy, Joseph Beuys (1921-1986), rather hilariously becomes Antonius van Verten (Oliver Masucci). But the film begins long before the would-be artist reaches school; first, it plunges us into a socio-political melodrama (Donnersmack’s specialty). Little Kurt is illicitly introduced to the joys of Nazi-condemned “degenerate art” by his free-spirit auntie, Elisabeth (Saskia Rosendahl). In the type of broad, unarguable blow delivered to the patriarchy that Donnersmack likes to deliver, Elisabeth falls foul of the sinister designs of Dr. Carl Seeband (Sebastian Koch), who runs a Women’s Clinic in strict accord with his SS principles. This character almost gets his own mini-film, filling us in on his wildly changing fortunes across time.

As Kurt grows up, he finds love and happiness with (ominously) another Elisabeth, Ellie (Paula Beer, who was in Christian Petzold’s Transit); the birth of their first child (and the painting Kurt makes in relation to it) is a sentimental highlight of the film. But there’s a complication looming: Ellie is the daughter of Dr. Seeband. This sets the stage for both strategic concealments and dramatic revelations in the post-war era of Germany’s history – especially hinging on the provable (or not) extent of Seeband’s prior involvement with certain, high-ranking Nazis.

Warning: the proper title of the film – clearly judged too conceptual for the English-speaking market! – is Work Without Author. That’s a bold title, and it is true, at the very least, to one of Richter’s stated intentions as a practitioner of art: to disappear behind the work, and have it stand and speak for itself. His is a fully anti-romantic position, chiming in with an entire, imposing conceptual art scene built around Beuys and Richter, then and since. But Donnersmack’s film aims to prove the precisely opposite viewpoint: that Richter’s art is work with an author, fed – albeit secretly and cryptically – by long-buried autobiographical events. Although Richter gave Donnersmack access to his life to the extent of allowing hours of intimate conversation, he finally got antsy about the whole project and refused to watch the completed film after glimpsing its trailer. I don’t blame him one bit.

Two main strands feed into Donnersmack’s anti-conceptual push. The first is the portrayal of van Verten/Beuys and his extremely dictatorial method of art education (students must attend all his free-form lectures, but he will never deign to look at any of their fledgling work). The young conceptualists under the master’s tutelage are all parodied as fools or opportunists (in another hopeful “Me Too” gesture, Donnersmack includes the vignette of a female performance artist whose work is deemed awful, but she is tolerated because she “has great breasts”). And the big moment comes when van Verten admits to Kurt that the obsessive materials of his own art – namely, fat and felt – can be traced to deep, never-forgotten, primal life experiences … So, Beuys was a romantic, after all!

The second and major strand of the film draws upon a strange and essentially true concatenation of events and details – a conjunction of which Richter himself was not entirely aware until an intrepid biographer unearthed them and brought the matter to the artist’s attention. In one of his “breakthrough” paintings – cleverly deforming a figurative style that he was soon to swap for more abstract realms – Richter used photographic projection and mirror reflections in order to arrange, on one canvas, the figures who are (in the film) his Aunt Elisabeth, Dr. Seeband and the high-ranking Nazi official whose legacy is being investigated. Richter did not consciously know the historical backstory linking these three people – but his unconscious processes led him to an undoubtedly uncanny intuition of the truth. Even at the Düsseldorf Academy, it seems, the creativity and heart of art can be reborn!

Donnersmack is best known for the Oscar-winning The Lives of Others (2006), a historical thriller about the activities of the Stasi during the 1980s. It was a popular movie that ticked every box the middlebrow arthouse market requires: it was slick, a little bit political, entertaining, and tied up all its loose ends into a neat bundle. It offered an individualised “human story” as well as a collective, social one. Personally speaking, it’s not my preferred kind of cinema, but it kept me watching for the duration, and I could admire its basic level of film craft. Never Look Away is a bit less taut in its construction, and is prone to repeating its “big moments” – such as an impromptu symphony of bus horns staged and conducted by both Aunt Elisabeth and Kurt across the span of years. Of such grand epiphanies are romantic artist biopics made!