Film Review: Locusts tries and fails to have it all

The Wake in Fright-lite struggles to balance the demands of a genre film with character-driven drama.
Adrian Martin 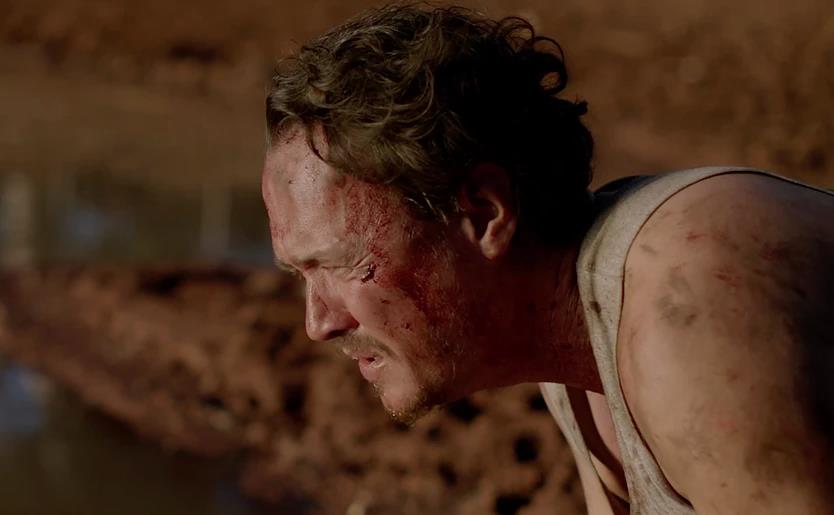 Locusts begins, trickily, with three enigmatically separate ‘hooks’. The first is a written legend about a plague of locusts – and this creature’s propensity for invasiveness and destructiveness. The second is (we swiftly presume) a flashback, showing a viciously domineering father and a bullied child nervously handling a gun. The third plunks us down in contemporary times: mostly vacant mining territory, where an as-yet unidentifiable corpse is found buried in gravel. And all this in less than three minutes!

The first hook turns out to be purely metaphorical: Locusts is not a horror movie about locusts. Hooks number 2 and 3 are swathed in multiple mysteries, hinting at later plot reversals, revelations and complications. Yet it’s hard for any filmmaker – even Martin Scorsese – to entirely avoid the association of ‘tele-drama teaser’ with these sorts of pre-credit flashes forward and back in the narrative timeline. This is not the last time that Locusts will prompt some viewers to wonder about how stories are being told and organised in our current era of makers and viewers alike shuttling between film and TV media formats.

Once the opening hook shuffle is over, we settle into the guiding tale of businessman Ryan (Ben Geurens). He’s reluctantly returning, in a slick car, to his hometown for Dad’s funeral. (So that was little Ryan in the opening flashback? Wait and see.) This place of origin which Ryan once defiantly fled has certainly seen better days: the landscape is dry and unproductive, the local economy has gone bust, and the inner lives of its inhabitants have shrunk into miserable little pellets of aggressive opportunism. And Ryan will soon find himself the target of this pervasive unpleasantness: he is held to account for his father’s considerable debts by a bunch of hoons whose every nasty move is seemingly condoned by an eagle-eyed, shifty cop (Peter Phelps).


Basically, it’s the Wake in Fright (1971) template, revisited so often by Australian cinema and TV. Toxic masculinity is the coin of the realm here: guys at an eternally loose end get drunk, burn along sandy roads, howl at strippers and make a little crooked cash whenever and however they can. Women are generally kept out of sight, shut away in various ‘service’ roles  – lap dancing included. Like in the Mad Max cycle, the system of law has broken down, and anything resembling normal, healthy family networks or supportive intimate relationships has long ago been twisted into something perverse and rotten. The atmosphere is entirely gothic: it’s all nasty, threatening homoeroticism, with the sickly guy at the head of the criminal food chain (Alan Dukes) wielding a gun from his wheelchair.

It’s hard to overcome the feeling that, as spectators, we’ve been here many times before – especially when Ryan’s face begins assuming a permanently startled expression (he woke in fright, I guess), while all the hard blokes around him strike the typical Aussie poses of leering toughness. It’s a far cry from the finer, more compassionate, less generic vision of Australian outback men in Alena Lodkina’s Strange Colours (2017). But the script of Locusts, mercifully, has a few further cards up its sleeve to play: there’s Ryan’s ex-flame, Izzy (Jessica McNamee), who proves to be a resilient and resourceful comrade; and especially his screwed-up, in-over-his-head but essentially goodhearted brother, Tyson (Nathaniel Dean).

Locusts is the fruit of a close collaboration between director Heath Davis (Book Week, 2018) and producer-writer Angus Watts. It’s clear that they have tried to balance the demands and expectations of a genre film – the genre, in this case, idling between thriller, mystery and action – with the traits of a ‘character driven’ drama.

The result is that, for a long time, nothing much really seems to happen in Locusts – its exposition of both its setting and its players is top-heavy and over-extended,  and the heavy, moody atmosphere is pushed to do more work, and carry more interest, than it can possibly bear.

Only relatively late in the piece do we get an engaging flurry of moves and counter-moves in the film’s somewhat cryptic intrigue – and, when that flurry kicks in, the cinematic style (especially in clever scene transitions) picks up as well.

Was the character-drama – the family story of the two brothers and their father – ‘reverse engineered’ by Davis and Watts from the generic, dirty-old-town premise? Perhaps not, but it feels that way. Like in some other current American productions that seemingly hesitate between cinema and television in their form – I am thinking of Alexandre Aja’s hurricane-powered Crawl (2019), Vincenzo Natali’s Stephen King adaptation In the Tall Grass (2019) and especially the disappointing Breaking Bad spin-off, El Camino – the scenes of anguished character interaction seem grafted onto, and therefore disconnected from, the action-mechanics that dictate person gets to shoot, beat or run over someone else.

For instance, Crawl also begins, like Locusts, with a tense family-snapshot flashback – this time involving father and daughter – that gives the story its crowning moment of propulsive impetus much later on; while In the Tall Grass strains to add a ‘human interest’, love-gone-wrong pregnancy element to its catalogue of supernatural horrors. It takes a master like Parasite (2019) director Bong Joon-ho to really integrate such devices well into the unfolding action clinches. El Camino, likewise, struggles to find the intersection – which Breaking Bad itself usually did – between tense, Tarantino-style face-offs and “deep personal chat” scenes.

Martin Scorsese recently stirred an ephemeral storm in the social media teacup by asserting, while on the publicity trail for his The Irishman (2019), that the Marvel Comics superhero films are ‘not cinema’ – We need cinemas to step up and show films that are narrative films,’ he combatively remarked, not mere ‘theme parks.’ This is a kind of coded double-talk: by ‘narrative,’ he really means dramas anchored in complex, psychological characterisation, and those ‘theme parks’ he unwisely derides are essentially the spectacle of physical action scenes.

Scorsese’s lament is a little disingenuous: in assignments such as Cape Fear (1991) and The Departed (2006), he in fact encountered his own problems squaring the straight-ahead demands of genre with the kind of agonised, reflective introspection he prefers. Locusts, for its part, is not quite aiming to be Raging Bull, but it does reflect the contemporary challenges – and pitfalls – of trying to combine diverse audiences and narrative conventions within the one neat package.