Film Review: ‘H is for Happiness’ is delightful 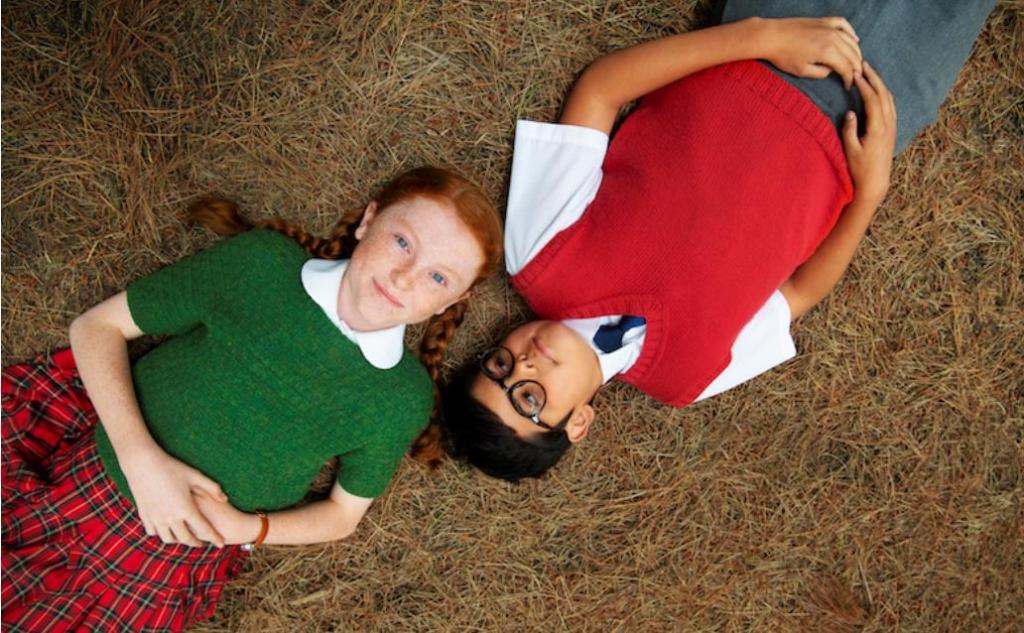 Candice’s worldview is captivating in ‘H is for Happiness’. Image courtesy Universal.

It took me a long time to warm to the Australian family comedy H Is for Happiness. So many mediocre films indulge in mannered production design and ‘quirky’ dialogue to compensate for the thinness of their storytelling and characters. So when I saw the vaguely retro look of this film – which, by the way, is delightful in its clear, bright colours of red, green, blue, yellow and pink – and met its odd-duck protagonist, Candice Phee (newcomer Daisy Axon), I was like, oh no, here we go again.

But director John Sheedy and screenwriter Lisa Hoppe, adapting Barry Jonsberg’s novel My Life as an Alphabet, have chosen their approach with wisdom, not whimsy.  Happily – so to speak – the whole experience of the film is crucial to understanding Candice as a character. Like her, it’s never mean-spirited, angsty and depressive, or self-consciously cutesy, but absolutely earnest and enthusiastic.

Candice is 12 going on 13, with the vocabulary of a Scrabble champion and a hairstyle borrowed from Pippi Longstocking. She’s the kind of swot who annoys the rest of her year seven class, especially cool girl Jen Marshall (Alessandra Tognini), who calls her ‘SN’ for ‘special needs’ – a taunt that fails to upset Candice. When their wall-eyed teacher Miss Bamford (Miriam Margolyes) assigns each student a letter of the alphabet as part of a class presentation on Open Day, Candice gets H and decides to analyse happiness.

At home, it’s in short supply. Several years earlier, Candice’s baby sister died of SIDS. Her mother Claire (Emma Booth), unable to let go of her grief, has been housebound with depression. Meanwhile, Candice’s computer-scientist father Jim (Richard Roxburgh) lurks in his garage lab, nursing his wounded pride; he fell out with his younger brother over the business they built together, which is now owned solely by Rich Uncle Brian (Joel Jackson).

The fact that Candice only ever calls him “Rich Uncle Brian”, even to her dad, is part and parcel of her odd personality. She’s friendly to everyone, but has no friends… until new kid Douglas Benson (Wesley Patten) sits in the empty seat next to her and, sensing a kindred spirit, confides that he has used gravity – jumping from a tree – to harness interdimensional travel. Promptly renamed “Douglas Benson from Another Dimension”, he becomes Candice’s friend and ally, and he shows her a grove of tall trees where he plans to make his next quantum leap.

There’s a much grimmer drama under the bonnet of this film – one that grapples with grief and loss, mental illness, bullying, childhood abuse and ugly family rifts; one that turns Albany, Western Australia from a charming, effortlessly multicultural seaside community to the kind of isolated, small-minded town that teenagers yearn to escape. But because Candice doesn’t see life that way, nor does the film.

One of my first clues to the project of this film comes when Douglas’s mum (Deborah Mailman) – although Douglas insists she’s only a ‘facsimile’ of his ‘real’ mum – wrongly assumes Candice is autistic. It’s a moment when an adult tries to make sense of a situation and fundamentally misreads it – and it made me realise that this film was subtly pushing back on many tween and young-adult clichés.

Axon and Patten are a joy in the central roles; Douglas’s sweet-faced adoration and appetite for chaos offer the perfect foil for Candice’s independence, and her urge for order and control. The adult actors also display a palpable affection for their characters and for the way this material veers between pantomime and pathos. I especially liked Catherine Moore as the tyrannical emergency teacher Miss Cowie, and Jackson’s endearing portrayal of Rich Uncle Brian, a naturally gregarious person trapped in cartoonishly luxurious, Gatsby-esque solitude.

To my surprise, I found myself caught up in the film’s – and Candice’s – worldview, laughing in genuine delight at its culminating dorky school concert. But the film also lays bare her parents’ unhappiness in a genuinely wrenching way that it refuses to resolve magically, with whimsy. Instead, it trends a clever, careful middle path: Candice is not forced into a ‘real world’ that is tough, cynical and mean; nor must she change her essential self to find happiness. She does discover a new capacity for care and empathy, but I appreciated most that it’s her innocent verve that brings happiness into other people’s lives, even as she learns it isn’t an emotion she can engineer in other people.

This warm and playful film has many wise observations to make about human nature. And it uses its vibrant mise-en-scène deliberately and astutely – never as a thoughtless grab-bag of quirks.