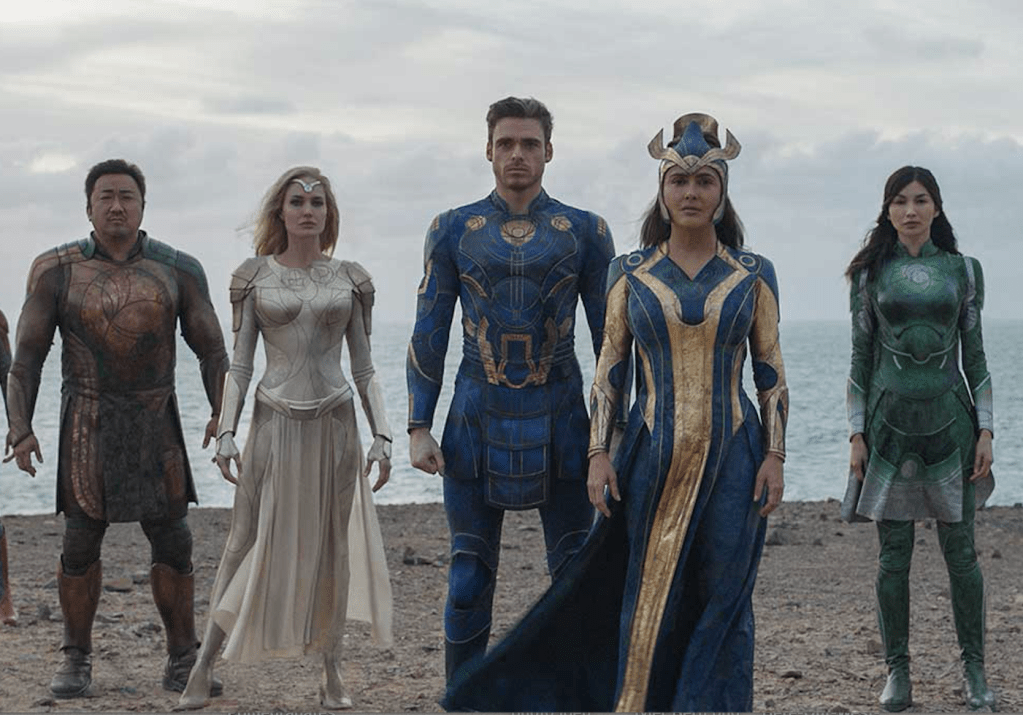 Just some of the cast of Eternals. via Disney.

Some things aren’t meant to be just fun. For a lot of people, even in 2021, genre fiction is something that has to earn respect. If a science fiction or fantasy movie isn’t super-serious in a way that reaches right down into the bones of the viewing experience, the fear is that audiences will laugh and walk out, and the fans left behind will then feel ashamed and walk out too.

This worry is deeply ingrained in Hollywood, even after decades of genre success. You see it in trailers for space epics that are all just thunderous music and grey images; you see it in prestige SF series that are just endless scenes of sombre people speaking leaden dialogue in fancy sets. You see it in fantasies where monsters and magic are the backdrop to conniving and lechery. And now you can see it on the big screen in Eternals.

Eternals is based on a comic by Jack Kirby, who came up with many of the greatest comics of all time. Thor? Him. Fantastic Four? Him. Captain America? Him (with Joe Simon). Darkseid, the bad guy Zak Snyder edited back into his cut of Justice League? Him. And the Eternals isn’t just any comic, but one of Kirby’s late period stabs where he was trying anything for a hit. Here ‘anything’ means, ‘what if Chariot of the Gods but the Gods created superheroes’.

Sent to Earth by Arishem (a space god known as a Celestial) to battle creatures known as Deviants – and only battle Deviants, which explains why they didn’t turn up during any of the previous 25-odd Marvel movies – the Eternals are immortal ageless figures who have spent the last seven thousand years inspiring humanity’s myths and legends. And also fighting monsters.

They include Sersi (Gemma Chan), who can manipulate inanimate materials; Ikaris (Richard Madden), who can fly and shoot lasers out of his eyes; fireball shooting Bollywood star Kingo (Kumail Nanjiani); the illusion-projecting Sprite (Lia McHugh) who will forever remain a child; the mind-controlling Druig (Barry Keoghan); Gilgamesh (Don Lee), who has power fists and is hanging out in the Outback; Makkari (Lauren Lidloff), who runs fast and is deaf; Phastos (Brian Tyree Henry), the tech guy who gets to have the first on-screen gay kiss in a Marvel movie; Thena (Angelia Jolie), a warrior with Space Alzheimer’s; and Ajax (Selma Hayek), their leader – until her death kickstarts the story.

the present-day scenes are almost all set in isolated areas, giving much of the film a thin, depopulated feel that’s great for moments where isolated characters stand out against picturesque backdrops, but not so good for making the film feel like anything but a video game with a limited cast of playable characters.

In large part this is a ‘getting the band back together’ story, as Sersi, Sprite and Ikaris travel the globe warning everyone of a looming threat, interspersed with flashbacks to their glory days hanging around previous civilisations. The flashbacks are full of people and life: the present-day scenes are almost all set in isolated areas, giving much of the film a thin, depopulated feel that’s great for moments where isolated characters stand out against picturesque backdrops, but not so good for making the film feel like anything but a video game with a limited cast of playable characters.

Director Chloé Zhao (Nomandland) brings enough of her sombre visual style to things to make this at least somewhat different from the usual Marvel fare. Unfortunately, her sombre visual style isn’t the best fit for what feels like it should be a crazy rollicking adventure packed with strange concepts, but is instead something of a slog spent with a found family who never really seem to click. Many of the Eternals have paired off over the years, either with each other or humans – Phastos’ partner is human and they have a child together – but romance and passion is not a lasting takeaway from this film.

A lot of the problems here are basic ones. The script juggles a large cast reasonably well, but a big team story probably isn’t the place to try and give everyone at least two defining characteristics. Ironically, it’s the more straightforward characters who end up the most memorable, which is a problem as the story isn’t about them. And if you really want to build a sense of threat, basically sidelining the initial menace and having a final battle where one character says, ‘yeah, I’m going to sit this one out’ with zero consequences, might not be the way to go.

What this is trying to offer that can’t be found anywhere else is scale. It’s a big cast, with a lengthy run time (it might have worked better as a miniseries). The timeframe is huge, the threat is (literally) massive, the theme is basically, ‘if you knew God’s plan with absolute certainty, what would you do if you disagreed?’. But without a strong human-level side to balance it all out, big concepts are just lifeless words and images. It’s the little things that let Eternals down.