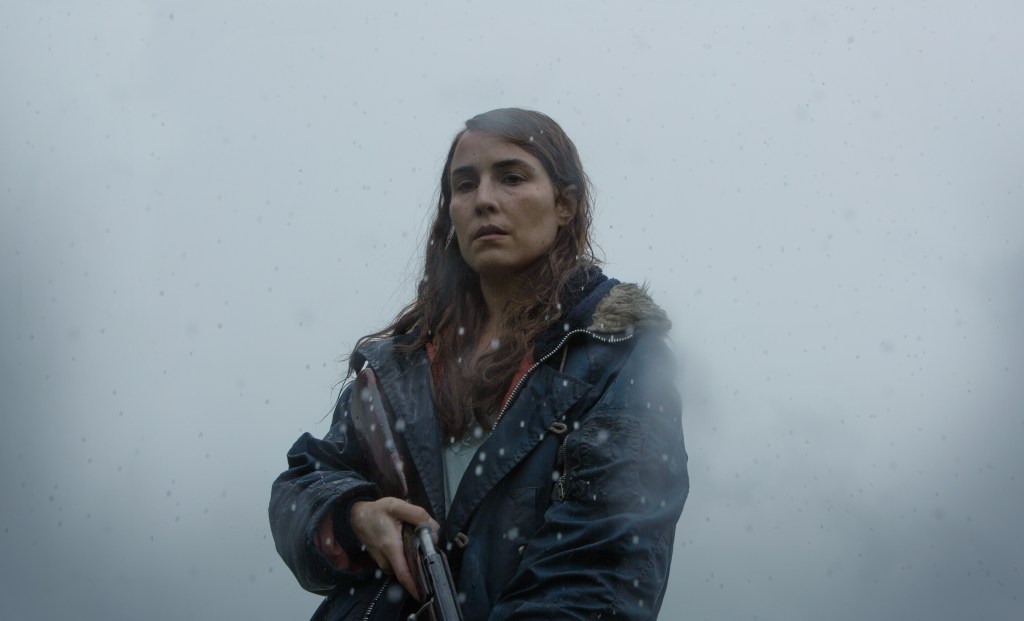 Here’s a credit I never expected to see on screen: ‘Executive Producers: Noomi Rapace – Béla Tarr’. The marriage of mainstream star glamour with the severest form of artistic ‘slow cinema’? Not that such a conjunction is entirely unprecedented: Apichatpong Weerasethakul’s latest, Memoria, stars Tilda Swinton (who has previously acted for Tarr); and Cate Blanchett took on no less than thirteen roles in Julian Rosefeldt’s video art project Manifesto. In the case of Lamb, the explanation is fairly straightforward: Rapace takes one of the leading parts (and so, like Adam Driver for Annette or Jessica Chastain and Oscar Isaac for the Scenes From a Marriage remake, also steps into a production role); and director Valdimar Jóhannsson is a graduate of Tarr’s short-lived (2013-2016) pedagogical project, film.factory.

Lamb is a film that Tarr himself could never have made. Yes, there is the emphasis on landscapes and animals, enigmatic plot ellipses and passages of silence between characters, familiar from The Turin Horse (2011) or Werckmeister Harmonies (2000). But Lamb, with its ominous drone-tones on the soundtrack and disquieting apparitions, leans closer to the horror genre than Tarr would ever allow himself to do. By the same token, it is unquestionably what Jóhannsson intended it to be: an art film (it won the 2021 Un Certain Regard Prize of Originality at Cannes). And as his feature debut, it is an impressive achievement.

Lamb is one of those movies that defy review, at least in the initial phase of its public circulation, because to divulge even the first major turn of its plot would be a spoiler. Even the official poster gives little away, beyond showing Rapace as María cradling a lamb – and setting the words Mother and Nature into stark graphic opposition. Clearly, this promises an ambiguous relation – both a fusion and a splitting – between the realms of human affairs and nature’s ways. Australian cinema, in fact, is no stranger to this broad theme: think of the original Long Weekend (1978) or Ann Turner’s classic, Celia (1989).

Even the opening, scene-setting exposition section harbours some small but important mysteries that should not be betrayed too quickly. Suffice to say, we are introduced to María and Ingvar (Hilmir Snær Guðnason), a married couple on a remote sheep farm in Iceland. Why have they abandoned their metropolitan past (involving some fame in a rock band) to embrace such an austere lifestyle? This is the type of film that refuses to satisfy any hunger for over-explanatory backstories. Like in Philippe Grandrieux’s brilliant Un lac (2008), we are simply presented with the brute, existential situation of two humans – plus animals of many varieties – in an undeniably beautiful but also somewhat disturbing world.

Again taking a leaf from his mentor Tarr, Jóhannsson provides us indirect or banal, and in any event only occasional, dialogues between Ingvar and María. Are they happy or sad, fulfilled or bored, mutually alienated or harmonious? The film gently guides us to infer whatever we can. So – skipping over what I won’t tell – María gets a little lamb. She and Ingvar quickly come to love and tend to it as if it were their own child, and even name it Ada. (I can assure you that, unlike in Lars von Trier’s Antichrist, no animal talks back using human speech.)

On this level, the film has a curious and coincidental affinity with the recent art-musical Annette – but where, in the latter, the central oddity arises purely from the way Leos Carax chose to depict the title character, here it is a literal fact in the storyline that viewers will need to contend with and accept (some unhappy spectators, I am sure, will merely scoff throughout). For myself, I had no trouble going with Jóhannsson’s flow: that’s where both the creepiness and the fun in his vision reside.

Lamb has found itself – rather against its director’s stated wish – yoked to a current fashion: ‘folk horror’. This is a subset of the horror genre emphasising (variously) pagan rituals, nature as a dark menace, communal covens, and ancient mythologies. Depending on how one slices up cinema history, such folklore is at the very core of the evolution of horror movies – think of the classic Witchcraft Through the Ages (1922), for instance – or else it is a more recent phenomenon, dating roughly from the original The Wicker Man (1973) to contemporary films including Midsommar (2019).

Whatever you make of the ‘folk horror’ label (I harbour some doubts about it), it’s clear that with a three-and-a-quarter-hour documentary (Kier-La Janisse’s Woodlands Dark and Days Bewitched) and a lavish DVD/Blu-ray box set from Severin devoted to it, folk horror will be dominating critical discourse for the foreseeable future. (Local footnote – the Severin package includes no less than four Australian features: The Dreaming, Kadaicha, Alison’s Birthday and Celia.)

I believe that Jóhannsson is right to resist the folk horror label in reference to his own film – even if, as has been suggested, his script (co-written with celebrated novelist and musician Sjón) appears to invoke bits and pieces from various Scandinavian mythologies. To my mind, Lamb is in the same tradition as the intriguing Swedish production, Border (2018). In that film, Iranian-born director Ali Abbasi made fundamental use of the Troll legend – Trolls that today live among humans, hold down typical jobs, and so on – but made it crystal clear in interviews that he did not give a damn about any folkloric aspect attached to the possible reality of such creatures. For him, the Troll was simply a dramatic metaphor, a plot device – the single, strange, surreal element that served to place supposedly normal society under the microscope and split it apart. Exactly in the way that Jean-Claude Carrière, in his inspired scripts for Luis Buñuel, Jonathan Glazer’s Birth (2004) or Nagisa Oshima’s Max, My Love (1986), would spin an elegantly catastrophic story from one, crucially odd detail treated by the central characters as if it were perfectly ordinary – like an aristocratic woman taking a chimpanzee for her lover. Lamb functions in a very similar way.

Naturally, some wicked humour is inherent in using such a surreal narrative premise. The laughs usually come from the presence of one or several people in the story who do not buy into the prevalent illusion (or delusion) that’s in the air. In Lamb, this place is filled by Ingvar’s sceptical brother, Pétur (Björn Hlynur Haraldsson). He gets a splendidly abrupt and enigmatic entry-point: a car stops along a deserted road, and three rough-looking types (we’ll never see them again) unload Pétur from the boot, kicking him off into the wilderness. That’s really all we need to know about his shady past. Once introduced as a subplot, however, Pétur’s tricky role in the household – he’s forever hitting on María – never really meshes organically with the themes of the whole piece. He becomes a cumbersome distraction for a while, presumably there to pad out the running time. This is the single misstep in the film’s generally taut, minimalistic construction.

One of the hoariest clichés of film reviewing is to declare: ‘the landscape is a character’. But here, in the face-off between people and their environment, the idea gains some validity. This landscape is presented in a remarkable way: when the characters trudge or even race through it, they scarcely seem to move an inch. Human and nature are out of phase with each other, and the contest between them ominously looms. The pay-off of this mounting tension is, eventually, stunning.

Actually, in Lamb, it’s more the case that character is a landscape. The faces and body movements of the actors are studied in stony silence, with only the most subtle indications of mood change or interior thought. Both Rapace and Hilmir are superbly cast and directed to this highly aesthetic end; Björn, being the representative of everyday pragmatism, gets to ham it up in a more conventional manner – especially when he is allowed to voice the ‘what the fuck?!’ response that may be swirling inside the heads of some viewers. But don’t pay much heed to that guy; it’s far better to let yourself be captivated by the uncanny spell cast by Ada – and her dual families – in Lamb.