Documenting the rise of the legendary Polynesian record label in 90s' and 00's Aotearoa/NZ against a backdrop of racism, this is an important and entertaining film about culture and identity, says Sonja Hammer.
Sonja Hammer 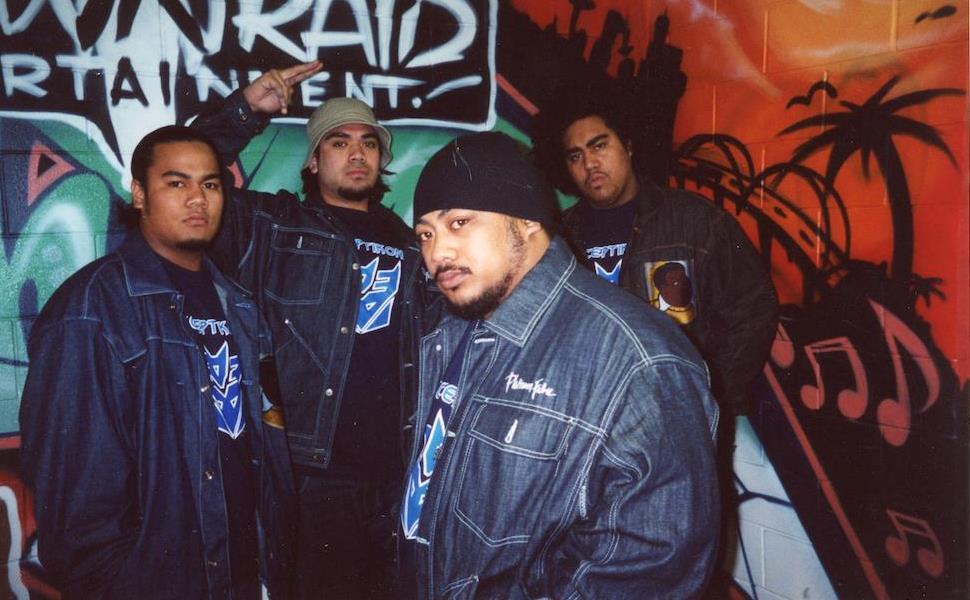 Radio waves reaching boom boxes in South Auckland garages in the 90’s were saturated with American Hip Hop and RnB. Suburbs like Mangere, Manukau, Papatoetoe and Otara were branded as ‘the ghetto’. ‘[With] all the crime, people think it’s the scariest place in NZ,’ says Andy Murnane ,one half of the duo who created the original Polynesian record label Dawn Raid Entertainment. The other half is Danny ‘Brotha D’ Leaosavai’i, and Dawn Raid is the new documentary that tells their story.

Oscar Kightley, in his directorial debut is probably better known to Australians through his work in projects like Bro’town (The Naked Samoans animated TV series) and Sione’s Wedding (as co-writer and actor). He is himself a Polynesian pioneer of film, stage and Television.

The origin story told in Dawn Raid begins at Manukau Technical College marketing class, circa late 90’s, where Brotha D and Andy the Southside ‘palagi’ (Samoan term for white person) meet. They have much in common. Both are from impoverished backgrounds and have experienced run-ins with the law. Both are hungry to improve their lives and are passionate about hip hop. They team up to create the Dawn Raid music label, recording hip hop unique to the Land of the Long White Cloud. To finance this record label, they set up a T-Shirt stand at Otara market, printing reclaimed racist words like ‘Bunga’ on tees.

The documentary points out the importance of the origins of the name ‘Dawn Raid’. ‘Our people came here because NZ needed cheap labour,’ Brotha D says to camera, it cuts to a racist political party TV cartoon circa 1970’s, depicting brown people fighting, in job queues. (In contrast, the animation created for the film, by Maka Makatoa, provides a Bro’town vibe for the narrative.)

Dawn raids were a shameful time in Aotearoa when mainly Samoan and Tongan families were routinely raided in their homes by police for the Department of Immigration, who were tracking down ‘overstayers’ (expired work visas), who were then removed from their homes in the early hours, and forcibly sent ‘back’ to the islands with no judicial process. Writing in her book The Terror of the Dawn Raids, Dr Melanie Anae says of this time: ‘Brown since birth, we had always been viewed as “suspect”, as criminals by police, as thieves by employers, as dropouts by teachers, as unassimilable factory fodder by the general public, and as economic liabilities by the state. And now, being suspect was state-sanctioned.’ As the years passed, the largest Polynesian city of Auckland, (its true Maori name is Tamaki Makaurau), reached a sort of impasse with palagi/pakeha culture coinciding with the strengthening of Maori sovereignty and the growth of te Reo Maori, so by the late 90’s, homegrown RnB and early hip hop sounds were flourishing.

Household names with ‘the Polynesian sound’, hip hop pioneers like Che Fu and King Kapisi appear here, but disappointingly the absence in the film of the Wahine in the music scene like Moana Maniapoto and Teremoana Rapley weakens the storytelling. Yes, the Dawn Raid crew dared to dream big in taking aim at the American hip hop market and we witness heartfelt musings of Brotha D and Andy reminiscing about how they connected with the finest artists from Southside: Deceptikonz, Adeaze, Mareko, Savage. But it’s disappointing that ‘Polynesian Princess’ Aaradhna is the only female artist depicted.

It wasn’t long before Dawn Raid’s artists were opening for the huge names of the noughties, and in-studio collaborations with Wu Tang Clan, Destiny’s Child, RZA, Bones-n-Thugs, Coolio, Snoop Dog, Missy Elliot and others. This was success Otara style, and triumph came with Savage’s single ‘Swing’ on Myspace with 10,000 views per day and its outing on the Knocked Up soundtrack in 2007. However, the single had to reach 1.5 million sales before the NZ music industry recognised this world first. Savage was the first major Polynesian superstar, and says: ‘We’re kids from South Auckland. Nothing like this should be happening to us!’

These stories are told by Polynesians about Polynesians and like Brotha D and Kightley, growing up through the activism of our ancestors and our own experiences of fighting racism, Dawn Raid documents a powerful shift in the Polynesian lands of Aotearoa/NZ

As director, Kightley skillfully utilises the footage, such as when artist Mareko lands in New York City in winter when it’s snowing, and on his bare feet he’s wearing the most Polynesian of footwear: the Jandal! It’s a scene of brevity and that classic Polynesian self-deprecating humour the world knows now, thanks to the likes of Taika Waititi.

Dawn Raid Entertainment holds the record of 35 gold and platinum records and has sold 4.5 million and recently thanks to Tik Tok Savage’s ‘Swing’ re-entering the charts. The film shows that the bust did come after the boom, but also reminds the audience what this ballsy label was up against, from the wall of systemic racism from the NZ police, to overdue Inland Revenue penalties (due to financial tax inexperience), which led to the collapse of the label, which later reinvented itself against all stereotypes and financial woes.

This film joins recent trends of music documentaries from Aotearoa, like Poi E: The Story of Our Song and Herbs: Songs of Freedom (both by Tearepa Kahi). These stories are told by Polynesians about Polynesians and like Brotha D and Kightley, growing up through the activism of our ancestors and our own experiences of fighting racism, Dawn Raid documents a powerful shift in the Polynesian lands of Aotearoa/NZ, where music culture is identity.

Sonja Hammer is a diaspora First Nations (Ngati Kahungunu, Kuki Airani-Aitutaki ) woman originally from Aotearoa/NZ, identifying as Takataapui and is Takiwatanga (Autism spectrum). Sonja is an experienced broadcaster having produced community radio as diverse from intersectional feminism to speculative and horror genre shows. She is the co-founder of the first Australian LGBTIQA+ pop culture advocate organization Queer Geeks of Oz. Sonja is the Secretary and Creative Arts Ambassador for not-for-profit Pasifika organization Pacifique X. Currently Sonja volunteers as a short film programmer for the Melbourne Women in Film Festival (MWFF) and the Environmental Film Festival Australia (EFFA), building Indigenous Pasifika and Maori representation.