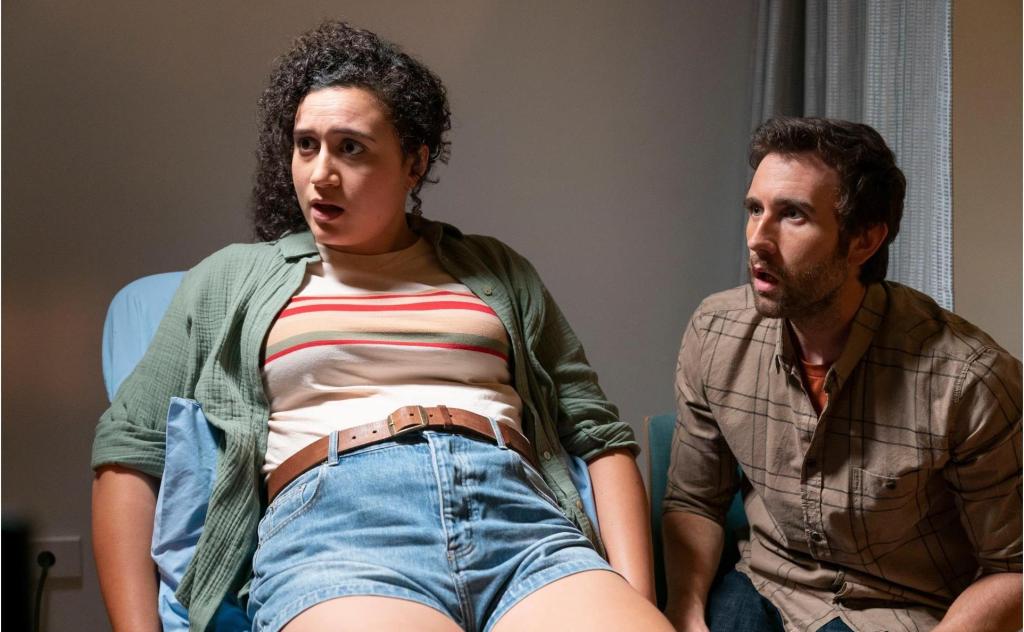 ‘I want to have a baby. I just don’t want to turn into a Mum!’ Rose Matafeo and Matthew Lewis in Baby Done. Image courtesy Madman.

Zoe (Rose Matafeo) prides herself on being fearless and free-spirited. She works as an arborist alongside her boyfriend Tim (Matthew Lewis), and is gunning for the World Tree Climbing Championships in Vancouver. They promise each other they’ll never knuckle under like the friends they keep losing to dull normie parenthood.

As Tim, Zoe and Zoe’s pal Molly (Emily Barclay) endure yet another elaborate baby shower where everyone either has a baby, is having a baby, or is a baby, Zoe reiterates the stages of defeat: ‘Married, house, baby, done.’

So when Zoe learns she’s pregnant, she panics that her independent life is over. ‘I want to have a baby,’ she says – ‘I just don’t want to turn into a mum.’ While an overjoyed Tim embraces impending fatherhood, Zoe fights her pregnancy all the way to the delivery room in this delightful Kiwi comedy from husband-and-wife director Curtis Vowell and writer Sophie Henderson (Fantail).

Produced by Carthew Neal and Taika Waititi’s Piki Films, Baby Done is full of the dry situational humour and shaggy indie aesthetic that have come to characterise New Zealand comedies. Fans of the genre will spot familiar faces including Rachel House (Hunt for the Wilderpeople) as a school principal; Loren Taylor (Eagle vs Shark) as Zoe’s mum; Nic Sampson (Funny Girls) as a ‘preggophile’ Zoe encounters; and Madeleine Sami (The Breaker Upperers) as a no-nonsense midwife.

Henderson wrote the script during her own pregnancy, and it sings with little observational moments. I enjoyed Zoe’s shock when confronted by a toddler versus the way an eager-to-please Tim only makes a baby cry, plus Zoe’s extemporised, bitingly sarcastic ‘birth plan’, which pays off beautifully later in the film. But I especially loved the way Zoe and Tim repeatedly correct the platitude ‘best for baby’ to ‘best for the baby’. You can just tell this bugged the hell out of Henderson.

Baby Done is full of the dry situational humour and shaggy indie aesthetic that have come to characterise New Zealand comedies.

Instead, it’s more like Juno or Obvious Child: a character-driven story about whether a relationship can survive the upheaval of pregnancy. As the film begins, Tim and Zoe are comfortable together – as complacent in their way as the parents they mock – but the pregnancy pushes them in different directions. Zoe’s reckless disregard for her physical limitations exasperates the earnest, careful Tim; meanwhile, Zoe feels trapped and manipulated by Tim’s pregnancy planning.

Matafeo and Lewis have a lovely, low-key chemistry: they make Zoe and Tim seem like real people you’d want to have as friends. But former Harry Potter star Lewis never outshines popular stand-up comedian Matafeo, who effortlessly carries the film’s dramatic moments as well as its comic ones. Her facial expressions are so richly funny; in one of the best scenes, overwrought and crying, she struggles to pose for passport photos. Yet Matafeo also makes Zoe loveable in her darker moments, as she pushes back – sometimes literally – against the idea that a pregnant woman is just a vessel for a baby.

Zoe’s terror of being losing herself may be heightened for laughs, but it’s never treated as a delusion. Instead, it’s a completely reasonable response to a society that seeks to tie women down instead of celebrating how high they can climb. And what makes Baby Done so satisfying is that it doesn’t make Zoe abandon her dreams.