A lifelong fan of Terrence Malick, Adrian Martin considers deeply his latest film and the stylistic tendencies of this auteur.
Adrian Martin 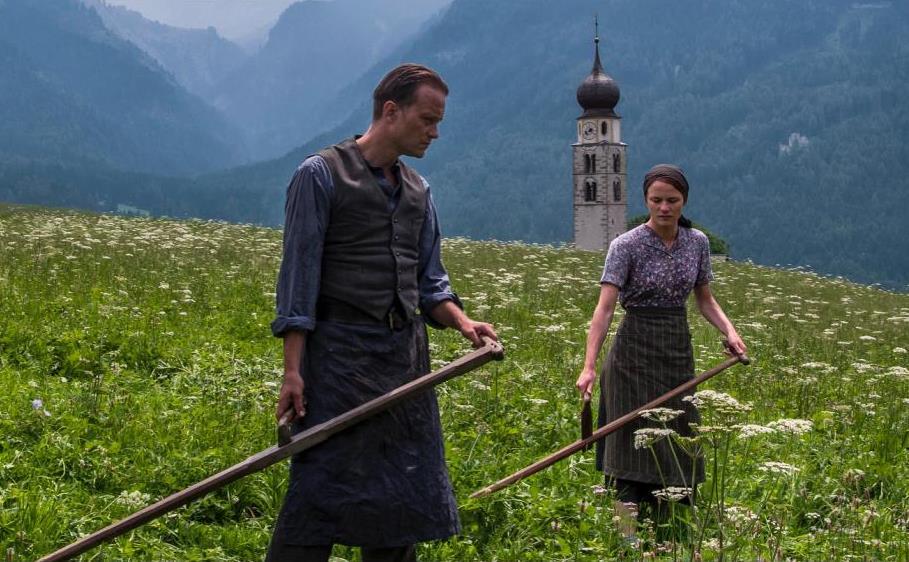 A Hidden Life – a parable of Good versus Evil.  Image courtesy Fox Searchlight.

Critics tend to be suspicious of simple films. They savour ambiguities, complexities, covert meanings, allusions, ambivalence – those attributes of a movie that demand deep thought, discovery and analysis. Critics shy away from a seeming excess of anything straightforward and forthright in cinema ­– aesthetic qualities they swiftly label as obvious, naive or simplistic.

A Hidden Life poses a challenge for critics – even including me, an almost wholly faithful fan of the work of Terrence Malick since my teenage viewing of his brilliant debut feature, Badlands (1973). In this true-life tale of Franz and Fani Jägerstätter set during World War II in Austria, there are no ‘grey zones’, no suggestive mysteries of theme. Franz is presented as a hero, a figure of absolute Goodness, because of his principled stand against Hitler and the values of the Nazi Third Reich – he is willing to join the army, but refuses to pledge (as every Austrian solider must) loyalty to the Führer. That simple decision, that one, resolute action, is enough to condemn him to death. And, despite a few, private moments of agony, Fani stands by her man all the way to the ghastly execution chamber (Malick spares us the worst of this spectacle, but well evokes its morbid atmosphere of terror). This is not, substantially, a political film; it is a parable of Good versus Evil, flat out.

In the sublime Days of Heaven (1978) – still his very best film, in my opinion – Malick gave us a sinuous interweaving of nature and culture, earth and technology, humanity and industry in the USA of 1916. A Hidden Life is, deliberately, a far less complex work on this level. The village of Radegund (the working title of the project was, for a long time, Radegund) is presented, for the first third of the film, as a veritable agrarian Paradise. The tools used for farming (such as a scythe to cut grass) are basic; the bodies of humans – especially their hands – and the strength of animals are the essential resources.

The mass media have never encroached upon this idyllic retreat ‘above the clouds’ and among the breathtaking mountains – no radios are heard, no newspapers are glimpsed, no newsreels are viewed in Malick’s picturing of Radegund. The usual social institutions, too, are largely absent: a sometimes comical, sometimes threatening local Mayor sways drunkenly in the open town square, but no bureaucratic offices are in sight (Malick reserves those dark, forbidding spaces for the Nazis in the metropolitan centres); and the delightfully innocent Jägerstätter children seem to just run and play all day, with no need to officially attend any stuffy school education. When, amidst all this natural luxury, the film introduces the sound of a single machine, it is amplified to evoke the coming of a Hell upon the earth.

Simple or simplistic? Malick has chosen to aim for the hard clarity of a fairy tale – or a moral tale – here. For the spectator, it’s a case of: take it or leave it – it’s a direct and uncompromising film at that level. The narrative is simpler to follow here than in the elusive and elliptical mosaic of Song to Song (2017), and it possesses a linear purity that eschews most of the time-shifts and ghostly apparitions that characterised Knight of Cups (2015) – films that, by the way, I resolutely defend! As has always been the case in his work, Malick is attempting to capture events in the ephemeral, unfolding moment of their coming-into-being, before history books turn them into myth: A Hidden Life does not mention, at the end, that Franz was eventually officially recognised (in 2007) by the Catholic church as a martyr; it does not even bother to remind us when World War II ended, and what subsequently happened to the nations involved. Franz’s case is hardly, in reality, a ‘hidden’ one any longer (especially not now that this film exists in his honour) – but Malick wants to immerse us in those moments where there was only his firm conviction, Fani’s mounting fear, and the disapproval or doubt expressed by everyone around them.

But how do we evaluate A Hidden Life on the level of its filmic realisation? Daniel Kasman (editor of the Notebook section of MUBI’s streaming service) has argued that the by-now very familiar affections of Malick’s films – ‘the wandering camera, the poetic internal ruminations spoken in voice-over, the seemingly random incursions into the drama of non-narrative characters or moments, and frequent cutaways to nature’ – are best considered not as ‘quirks’, but as ‘building blocks’ of the director’s approach. I agree with that, and certainly Malick has refined and varied these techniques from film to film: A Hidden Life benefits, for example, by stepping away from overtly ‘metaphysical’ musings in voice-over and instead relies, much of the time, on the simple and powerful words directly derived from Franz’s and Fani’s letters. But I also believe we must recognise that Malick both gains and loses something in the brave adoption of his general stylistic method – one that he has pursued with mounting fervour over the past decade.

What he gains, quite simply, is an unprecedented level of freedom and spontaneity. In a fascinating production report by Bilge Ebiri in Vulture, we learn that Malick likes to ‘cubize’ his scenes, shooting the entire action from three or four different points, so as to multiply the possibilities in editing. That may sound, at first blush, like what very many filmmakers routinely do: covering the scene from different angles. But with this crucial difference: Malick does not rigidly mark out the successive positions of the actors; rather, he encourages them to ‘keep moving’ incessantly, according to their emotional whim, and to their sense of the changing, natural light conditions (‘Vermeer yourself’ – find the light and place yourself in relation to it – is apparently his favourite piece of direction for those in front of the camera).

What Malick gives up here – and I think it is a major loss – is any classical sense of mise en scène, of staging and sculpting a scene in an even remotely traditional way. There is absolutely no continuity between one shot and the next during any portion of action or conversation; everything is jump-cut fragments chosen freely from multiple takes. Malick and his many editors work for months on the effects of surprise, disorientation and lyricism that this form allows – and the carefully layered sound design enhances its poetic drift. But there is also a weariness, a clunkiness and a vagueness that can set in, all too often. An enigmatic scene between Franz and a Bishop, for instance, seems to keep restarting itself – the camera moves again in the same direction, the actors shuffle around, the Bishop frowns in discontent at the window – and it is only immediately afterwards, when Franz tells Fani, ‘I think he thought I was a spy’, that the dramatic point of the scene becomes, in retrospect, clear.

Another effect – hardly an insignificant one – of this chosen style is that the actors frequently seem to go largely undirected; Malick is clearly after their sheer ‘presence’ or their ‘soul’, rather than the articulated nuance of their interpretation. August Diehl and Valerie Pachner in the lead roles provide that soulful element: they clearly ‘clicked’ with the director’s way. But what about the rest of the cast (the late Bruno Ganz included)? Badlands, in retrospect, had already sown the seeds for what would be the dominant behaviour of the figures in his films: people playing, frolicking, running, dancing – and not always with the verve or expressive power evident in The Tree of Life (2011). Over time, Malick has complemented this tendency with another, diametrically opposed mode, which I sometimes find strange in its full-on presentation: angry or disturbed people shouting, raging, their veins popping out of their head, sometimes literally foaming at the mouth like mad dogs. The presence of Nazism in A Hidden Life allows, alas, plenty of room for this type of histrionic display (in unsubtitled German babble).

What, ultimately, is the film about? It devotes a striking vignette to a painter who fills the interior of a church with typical frescoes of Biblical scenes. This artist lives with a bad conscience; he has stuck to the conventions, the stereotypes and clichés of his genre, and has not yet plucked up the courage to strike out and attempt to paint what he refers to as a “true Christ” – a worthy depiction of who Jesus really is, and what he could or should mean to the contemporary world. The suggestion here is not subtle, nor is it meant to be: for Malick, his Franz is this true Christ – and, as in his other war film, the magisterial The Thin Red Line (1998), properly Christian iconography abounds.

Franz is also – although I feel most reviewers have felt it too indelicate a point to underline, given the film’s grave subject matter – a ‘true Malick’. Surely the director identifies profoundly with this man who stuck to his principles no matter what – and lost most of his supportive friends in the process. That is exactly what Malick has done as a film artist, and more or less exactly what he has suffered (minus the execution) in the difficult years between The Tree of Life and A Hidden Life. The final 30 minutes of Franz’s story are almost unbearable to experience – I defy anybody to not cry – but, for me, the most touching, and certainly most confessional, moment comes in a gesture at the very end of the final credit roll: Malick dedicates the film to his own wife, Alexandra.

An overpowering, spiritual, almost cosmic love has long been a key Malick subject; but so, too, has the more fraught theme of loyalty – staying true to the initial inspiration that such a love offers its participants. Captain John Smith couldn’t manage it for Pocahontas in The New World (2005), and neither could Ben Affleck for his beloved Olga Kurylenko in To the Wonder (2012). Such weak, vacillating, ultimately faithless guys were also, one feels, deep reflections of a part of Malick’s personality, or his life. A Hidden Life, thanks to the story of Franz and Fani, makes it to higher ground: lasting fidelity to the event of love in this lifetime, as well as implied access to that eternity which always beckons over the tops of the tall trees, beyond the clouds and the mountains, in the cinema of Terrence Malick.